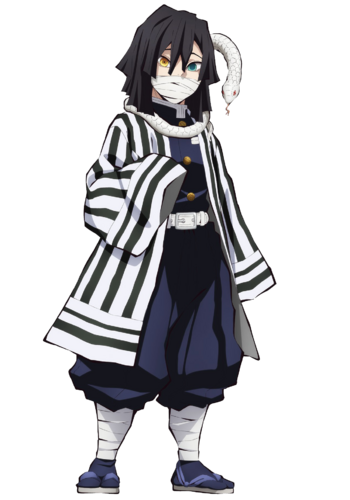 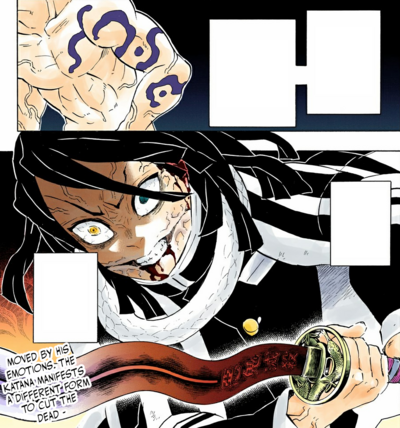 Superhuman Physical Characteristics, Acrobatics (Is highly agile), Master Swordsman (Is one of the best swordsmen in Demon Slayer Corps, during Pillar training he taught sword skill revision training to other Demon Slayers), Hand-to-Hand Combatant, Elasticity (Applicable only to his blade. Can control it to bend and extend it), Body Control, Regeneration (Low. With breathing, one can stop blood hemorrhages), Statistics Amplification (Breaths increase the strength of humans to match Demons. Also has Demon Slayer Mark that increases his power and speed), Regeneration Nullification (Up to High-Mid), Perception Manipulation, Information Analysis, Enhanced Sight (See-Through-World makes his perception of time slow down and makes user see directly opponent's muscles, blood flow and movements which allows them to predict their next moves)

Resistance to Fire Manipulation, Water Manipulation, Heat Manipulation (Demon Slayer Corps Garbs protect against fire, water and cold), Fear Manipulation, Paralysis Inducement (As a Pillar, he should same as Giyuu be unaffected by the aura of Lower Moons like Rui. Rui's aura was implied to be similar to Shinobu’s, which caused intense shuddering and lack of air. Also is resistant to Muzan's aura that made Akaza bleed and paralyzed him in fear), Enhanced Senses, Analytical Prediction, Extrasensory Perception (With See-Through-World, his intent becomes completely concealed and impossible to detect)

Attack Potency: At least Building level, at most City Block level+ (Should be comparable to Base Gyomei), likely City Block level+ with Demon Slayer Mark (Stronger than before. Cut Muzan's arm whip, something only Gyomei who's the strongest Demon Slayer in his era was previously able to do. Cut Muzan's neck twice, only failing to do lasting damage due to his regeneration. Helped Tanjiro parry Muzan's arm whips alongside his snake)

Speed: Massively Hypersonic+ (Superior to Zenitsu, who could do this), higher with Demon Slayer Mark (Can parry hits from Muzan alongside Tanjiro, continuing to do so even when he was blinded, using only his snake to guide him), even higher with See-Through World

Lifting Strength: Unknown (He was stated to be a little weak when it comes to arm-wrestling, though he is strong enough to pin Tanjirou to ground with Tanjirou stating that he is not able to move)

Durability: At least Building level, at most City Block level+, likely City Block level+ with Demon Slayer Mark (Could take a very casual hit from Muzan. Stopped Muzan from eating his head off)

Stamina: Very high. Comparable to Giyuu, after being hit by Muzan's attack and being influenced with by his blood he could still fight, unlike his fellow Pillar Mitsuri who was greatly affected by the same attack, Pillars can train for months through training that almost puts them on verge of death. Continued fighting Muzan even when both his eyes were cut out.

Intelligence: Above average (As a experienced Demon Slayer, he is quite analytical and intelligent in battle)

Breath of the Serpent (蛇へびの呼こ吸きゅう Hebi no kokyū): A breath style that focuses on twisting and bending the sword like how a serpent slithers.

Retrieved from "https://vsbattles.fandom.com/wiki/Obanai_Iguro?oldid=6149227"
Community content is available under CC-BY-SA unless otherwise noted.