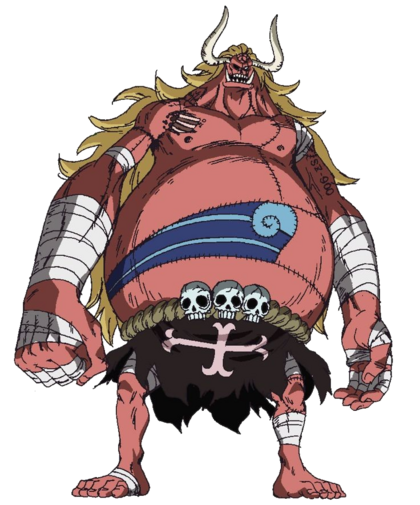 Oars is Gekko Moriah's most prized Zombie, as he is known to have been an ancient monster that wreaked havoc. He was reanimated after Moriah stored his body and waited for a powerful pirate to arrive that could make Oars into the most powerful zombie. In this case, it was Monkey D. Luffy, who at the time scored a bounty of 300,000,000 Belis. Oars was Moriah's 900th Zombie soldier.

Oars was one of the main antagonists of the Thriller Bark Arc as he nearly defeated most of the Straw Hats and it took Nightmare Luffy even the playing fields. Despite being capable of overwhelming the Straw Hat crew, Oars was eventually defeated by them, as his spine was crushed and he later had Luffy's shadow ripped out of him by Moriah.

Age: Unknown (His age while alive is unknown, but he has been a corpse for centuries)

Classification: 900th Zombie reanimated by Gekko Moriah, in life he had the Epithet "The Continent-Puller"

Powers and Abilities: Superhuman Physical Characteristics, Master Hand-to-Hand Combatant (Possess all of Luffy's previous combat experiences and skill), Acrobatics, Inorganic Physiology (Type 2), Self-Sustenance (Types 1, 2 and 3), Immortality (Type 2 and 7), Large Size (Type 1), Limited Elasticity and Body Control (Has access to many Luffy's techniques), Longevity (Giants can live up to 300 years), Possibly Immunity to Pain Manipulation (Zombies are stated to be unable to feel pain in any way)

Attack Potency: Small City level (Matched Sanji's Diable Jambe. Far stronger than Gecko Moria. Could effortlessly one-shot most of the Straw Hats Pirates with his attacks like Zoro and Sanji)

Speed: Massively Hypersonic+ (Can move fast enough to attack Sanji, although he was in midair, before he could react. He consistently dodges attacks from the Straw Hats and blitzed them. Zoro states that Oars moves just like Luffy

Lifting Strength: Class G (Could pick up a large tower, use it as a weapon, and throw it a great distance)

Striking Strength: Small City Class (Oars easily shattered giant chains that were able to wrap around his entire body. When Oars was revived from his 500 year long slumber, he completely shattered the wall of his giant freezer, which was made of thick steel. Could effortlessly overwhelm attacks from Zoro and Sanji)

Durability: Small City level (Attacks from the Straw Hats could barely leave any visible damage on Oars. It took the efforts of all of the Straw Hats including Gear 3rd Luffy to incapacitate him. Could withstand numerous attacks from the likes of Nightmare Luffy and was relatively fine and still able to keep fighting)

Stamina: Limitless (As a zombie, Oars does not tire, and the only way to stop him from fighting is to destroy anything in his body that is required to move his body parts, such as his muscles, or spine). He only can stretch his body if Moriah manipulates his shadow.

Range: Dozens of meters normally, likely over a couple kilometers with Moria manipulating his shadow

Intelligence: Below Average, but due to having Luffy's shadow, he has his personality, and battle experience

Weaknesses: A massive amount of salt being consumed by Oars will remove Luffy's shadow from his body, making his body lifeless. His right arm went through major operations and is a weak spot that can be exploited.

All of Base Monkey D. Luffy's Pre-Timeskip attacks