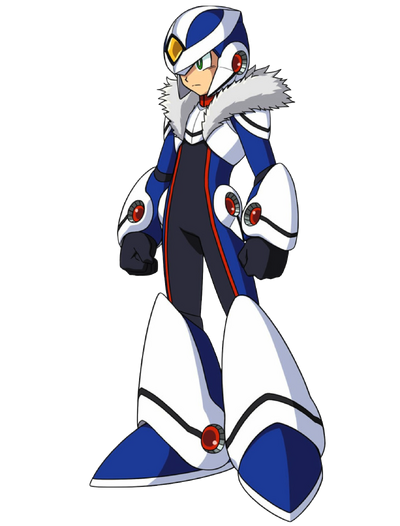 The protagonists of Rockman XOver who were created by Dr. Light and Dr. Cossack after a collusion of villains from across the Mega Man timelines kidnapped every incarnation of Mega Man ever, along with Proto Man and Zero. They were created with very basic abilities but are able to be augmented with Battle Memories, the powers of their predecessors in the form of special chips they find on their adventures, allowing them unlimited potential to grow and develop.

Attack Potency: Solar System level (Based on X's schematics and built by Light himself) | Low Multiverse level (OVER-1 gains access to the powers of the characters embedded in the Battle Memories equipped, which include MegaMan.EXE's Bug Style which took apart the entire Cyber World and later restored it)

Speed: Massively FTL+ (Should be on par with X) | Massively FTL+ (Comparable the characters whose Battle Memories he's equipped with, which include MegaMan.EXE and Geo Stelar, the latter of which can move at 2.6 Billion times the speed of light and the former of which is able to reach speeds of 60.4 Quadrillion times the speed of light at his peak)

Lifting Strength: At least Class G (As Reploids they are able to lift greater weights than any human and can wield weapons as large as themselves with ease)

Stamina: Limitless (As a Reploid they do not fatigue, but can be slowed down with continual damage)

Intelligence: Human-like intelligence due to their nature as a Reploid and eventually becomes experienced enough in combat to defeat accomplished fighters like Fairy Leviathan.

Weaknesses: Can only equip a limited number of Battle Memories at a time (thus limiting the number of powers he has access to at any one time), as robots built by Dr. Light they run on solar energy, meaning that long periods of time without a source of light can depower them, certain armors make them more vulnerable to certain types of elemental attacks.

Key: Base | With MegaMan.EXE's powers

Note: Few of these abilities are demonstrated in their original game due to the limitations of the sidescroller nature of the series. However, the profile was built upon the statements made in the game.

OVER-10 Armor
Add a photo to this gallery