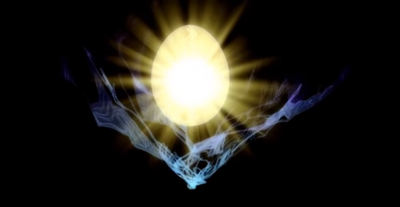 Nyx is an alien being, said to have inspired the idea of the Greek goddess of the night, and serves as the true Final Boss of Persona 3. Once known as "The Star Eater", Nyx one day crashed into the primordial Earth, leaving fragments of its psyche on the surface while its body entered a dormant state and became the Moon. These fragments incited the ancient lifeforms into forming a self-defense mechanism known as the Collective Unconscious. The Collective Unconscious being the place where all Personas and Shadows throughout the Persona series originated.

Despite its major role in the franchise, it has only physically appeared for a very short amount of time in their True Form, during the last scripted battle of Persona 3.

Gender: Male (as Ryoji), Genderless but referred to as Female (as Nyx).

Classification: Mother of all Shadows, Alien, Star-Eater, Planet-Eater, Goddess of the Night, Death

All previous abilities to a far greater extent, Large Size (Type 4, Nyx is the Moon) and Avatar Creation.

Striking Strength: Universal+ (Can harm the End-Game SEES) | At least Universal+ (Nearly killed Makoto Yuki when he held the Universe Arcana in a single hit)

Stamina: At least Extremely High, likely Limitless. Nyx is the source of the Plumes of Dusk, which are what power ASSWs such as Aigis and Labrys indefinitely.

Range: At least Several Kilometres, possibly Planetary with skills (Should be capable of attacking over longer distances than normal Persona users due to Large Size), Planetary with The Fall.

Intelligence: At least Genius, likely much higher. Nyx's wave-like psyche was so complex that Earth's primordial lifeforms were forced into a state of explosive mental evolution just for their minds to survive coming into contact with it, eventually culminating in the defense mechanism known as the Collective Unconscious; which seals away said psyche to prevent it from further affecting their vastly inferior minds.

Weaknesses: Its elemental weaknesses vary depending on its Arcana | None notable

Arcana Phases: Nyx Avatar can switch between its phases, with each phase representing one of the major arcana between 0 and 13. Each phase grants it different elemental affinities and access to different magic, as well as a different HP bar. It is unknown if it can switch between them freely. All phases possess a basic Almighty attack with its sword, dealing damage equivalent to Megidola.

Mother of Shadows: Nyx is the mother of all Shadows, and the amalgamation of all Shadows within the Collective Unconscious, as all Shadows were originally a part of her. Due to this, she possesses all of the abilities of every Shadow encountered throughout the Persona series.