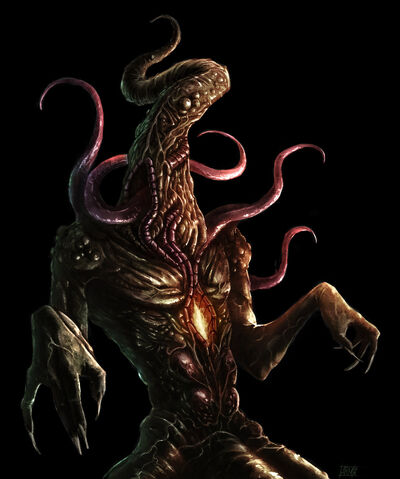 Nyarlathotep, also known as the Crawling Chaos, is the messenger of the Outer Gods. While most Outer Gods appear to have little to no semblance of human-like personality, Nyarlathotep houses a malign intellect, intent on putting its knowledge to the most despicable uses possible.

Gender: Irrelevant, varies depending on form

Age: Beyond all concepts of time

Classification: Outer God, Messenger and Soul of the Outer Gods, Child of Azathoth

Attack Potency: Varies depending on the avatar. The strongest are Outerverse level (One of Nyarlathotep's avatars took a mortal to the throne of Azathoth, which resides vastly beyond dimensional space. Another of his avatars, the Black Man, would take those who served him to "the throne of Azathoth at the center of ultimate Chaos", which as shown in other stories, is a place incomprehensibly beyond the confines of dimensional space and reality.) | Outerverse level (Just like all the other Outer Gods, he exists beyond the "archetypal infinity" of dimensional space and other such confines. Even the numerous avatars he can effortlessly create are able to vastly transcend the concept of dimensional space should he so desire, and Nyarlathotep's true form is an untold amount greater. Should transcend his avatars as much as his avatars transcend basic undimensioned creatures like the stronger Great Old Ones.)

Speed: Varies depending on the avatar. The strongest have Irrelevant speed | Irrelevant

Durability: Varies. The strongest are Outerverse level (Some of the avatars are completely unbound from reality. The Black Pharaoh took an attack from Nodens, another dimensionless being, and was merely surprised it was able to kill his pets.) | Outerverse level (Even some of Nyarlathotep's avatars have been shown to vastly transcend infinite dimensional existence, and Nyarlathotep's true self is infinitely superior to them by an unknown degree, making it nigh-impossible to truly affect. Its nature as the "soul and messenger of the Outer Gods" makes it virtually impossible to actually destroy.)

Stamina: Varies among avatars, though most have limitless stamina | Limitless

Weaknesses: Certain avatars have specific weaknesses (for example, the Haunter of the Dark cannot stand light and can be driven away by it), while others do not have any notable weaknesses. | Subservient to Azathoth, and thus must grudgingly perform any task its master desires. Other than that, none notable.

Note: Nyarlathotep's true self never appears directly in the mythos, and interacts with other characters via multiple avatars. While this makes it difficult to gauge the entities true power, it is likely comparable to the other Outer Gods and is obviously unfathomably superior to even its strongest avatars.

One of Nyarlathotep's most common avatars has the appearance of a young but regal pharaoh.

The Black Man, holder of the book of Azathoth and patron of a great many witch cults.

The Faceless God, a mysterious avatar who can send its worshipers back through time itself.

The Haunter of the Dark is a terrifying avatar of Nyarlathotep from beyond time and space. It can be summoned by using the Shining Trapezohedron.
Add a photo to this gallery