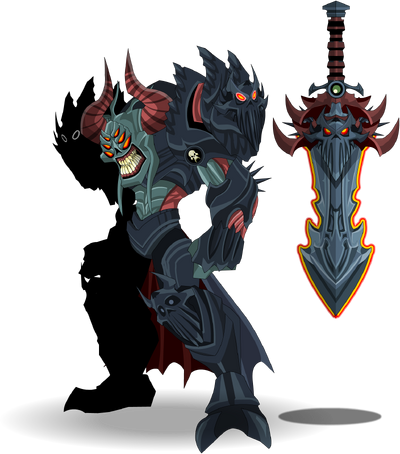 Nulgath is an archfiend that rules over the Nulgath Nation as well as Tercessuinotlim and a large majority of the underworld. Nulgath holds a rather deep grudge against Dage the Evil and the Undead Legion for betraying the Nulgath Nation and has shown rather humorously harsh behavior toward virtually anyone he encounters. Nulgath is also a notably significant character in Oversoul.

Name: Nulgath the Archfiend, Miltonius, The Old One, Fiend of the Underworld, Lord of the Oversoul

Powers and Abilities: Superhuman Physical Characteristics, Weapons Mastery, Telekinesis, Power Bestowal, Extrasensory Perception, Soul Manipulation, 4th Wall Awareness , likely possesses all Void Highlord abilities which include Fear Manipulation, Empathic Manipulation, Life Force Absorption, and Portal Creation, is one of the only other being other than Death that is capable of transporting the Hero of Lore out of the Underworld for a limited period of time, can ignore conventional durability with soul manipulation and life force absorption.

Attack Potency: Unknown (Comparable to de-powered Dage, claimed to be able to kill the hero whenever he desires to. Implied to have defeated Dage the Evil in the past but will eventually be defeated by Dage within the next thousand years.)

Striking Strength: Unknown (Nulgath is currently the highest damaging entity in the AdventureQuest Worlds game, being able to do 2,000,000,000-7,000,000,000 damage per strike which is more than enough to one-shot the player multiple times over.)

Retrieved from "https://vsbattles.fandom.com/wiki/Nulgath?oldid=5386450"
Community content is available under CC-BY-SA unless otherwise noted.