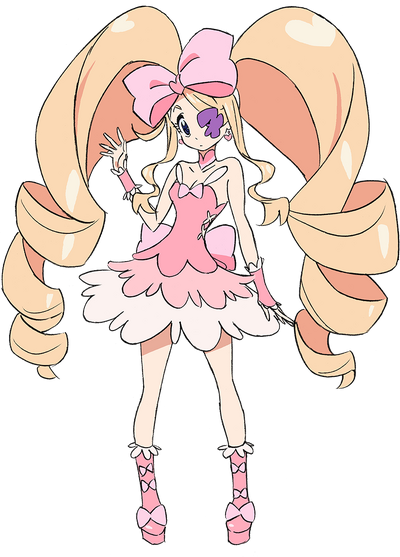 Nui Harime is Kill la Kill's secondary antagonist, most known for being the killer of Ryuko Matoi's father. She's a being made entirely out of Life Fibers and a loyal minion to Ragyo Kiryuin in her goal to eradicate planet Earth. Despite her childish appearance and demeanor, Nui is an incredibly dangerous and sadistic person, who often brutally torments opponents for her own pleasure.

Powers and Abilities: Superhuman Physical Characteristics, Life-Fiber Manipulation, Regeneration (High-Mid. Stated to have regenerative capabilities identical to Ryuko), Immortality (Type 3), Likely Self-Sustenance (Type 1. Stated to have almost the exact same biology as Ryuko, who can survive the vacuum of space), Cloth Manipulation, Duplication, Shapeshifting, Flight, 4th Wall Breaking and Toon Force (Low-level and not for combat), Willpower Manipulation (Able to create massive shockwaves from her willpower alone), Mind Manipulation, Memory Manipulation, Empathic Manipulation and Morality Manipulation via Mental Refitting, Afterimage Creation, Can create a projection of herself as a means of communication over long distances

Attack Potency: At least Mountain level (Fought on par with True Life-Fiber Synchronized Ryuko, Extremely casually stomped all four members of the Elite Four with their Mk 2 uniforms) | Country level (Took full control of the Original Life Fiber, greatly increasing its power by sacrificing herself to integrate the Life Fibers in her body into it. Should be at least comparable to if not superior to base Ragyō Kiryūin)

Speed: At least Massively Hypersonic+ (Over Mach 4500+. Was able to easily blitz Synchronized Ryuko, placing tacking needles all over her body while the two are fighting without her seeing or noticing it. Was able to spot Inumuta through his clones while fighting Sanageyama. Fast enough that Mk 2 and 3 Uzu cannot sense her movements.) | At least Massively Hypersonic+

Durability: At least Mountain level (She took on the combined force of the Elite Four's attacks without a scratch on her. Casually took on Ryuko with no damage, regeneration makes her hard to kill as her wounds heal almost instantly, and she can put her limbs and head back on as long as the connection isn't totally severed from both sides simultaneously) | Country level

Stamina: Extremely high (After working on making Shinra-Koketsu non-stop consecutively for a month she stopped work temporarily to fight Ryuko, immediately went to attack the Naked Sol where she fought the elite four and satsuki, fought Ryuko AGAIN, got her arms cut off and lost copious amounts of blood in the process, immediately went back to working on and finishing Shinra Koketsu, then went immediately after to fight the entirety of Honouji Academy on her own, all without showing signs of exhaustion), possibly Limitless due to her biology.

Range: Extended melee range with various weapons. Hundreds of meters with shockwaves. Unknown with Toon Force (Can move between transition slides, stand on top of the show's subtitles and interrupt the credit scene)

Intelligence: Gifted (Nui is an extremely capable fighter, being able to effortlessly fight against the Elite Four, who were all wearing enhanced, Three Star Goku Uniforms, fight on even grounds against Kamui-wielding fighters such as Satsuki and Ryuko, and easily defeat the Nudist Beach forces on her own. Despite her simultaneously carefree and insane demeanor, she is a highly precise and analytical fighter, able to accurately analyze a person's body to determine their proportions measurements to a T while in the middle of a fight and stick their entire body full of acupuncture needles without them noticing. Nui is also very proficient at psychological manipulation, and often uses her skill to lower her opponent's guard or make them so infuriated that they attack in a frenzy.)

Weaknesses: If one of her limbs or head is severed completely (which has to be done fast and at both sides at once), it can't regenerate. She tends to underestimate her opponents. Loses her calm and collective self if she's significantly losing a match.

Key: Base | Merged with the Original Life Fiber