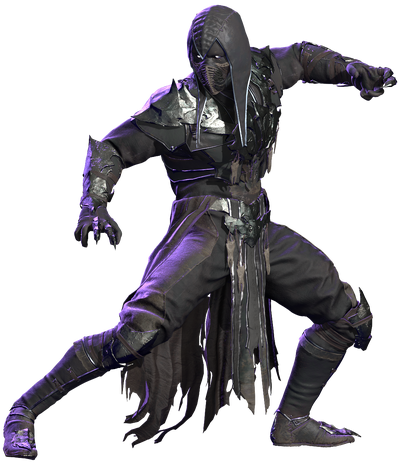 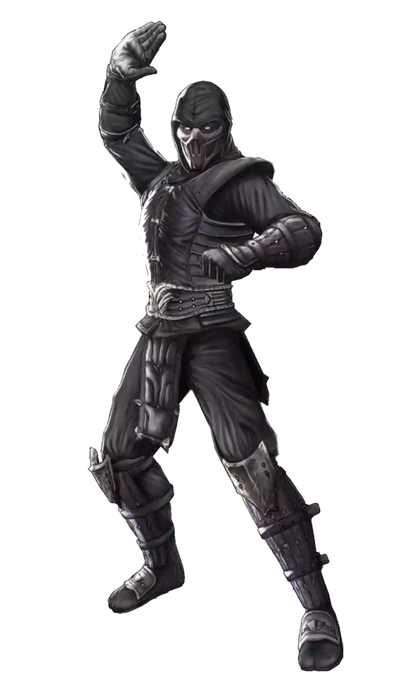 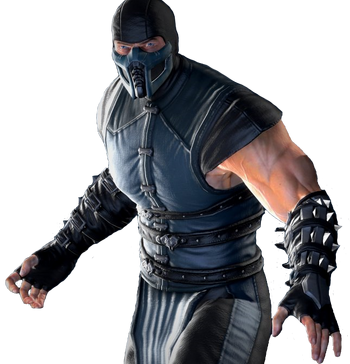 Bi-Han was originally a professional assassin working for the Lin Kuei clan under the name of Sub-Zero and defended Earthrealm from the forces of Quan Chi and Shinnok. When participating in the Mortal Kombat Tournament, he fought with Scorpion, who consumed by vengeance ends up killing him. After his death, he is resurrected as the wraith Noob Saibot, who will later pursue his own interests in the original timeline. He is the brother of Kuai Liang, the current mentor of the Lin Kuei clan and the current Sub-Zero.

Shadow of the Netherrealm. In life, Noob Saibot was known as Sub-Zero. Unjustly murdered by Scorpion, he was resurrected by Quan Chi and granted power over darkness, but as Quan Chi’s slave. Now, Quan Chi is dead. Noob Saibot is finally free to reclaim the honor that was stolen from him.

Name: Bi-Han (real name), Sub-Zero (former), Noob Saibot, has several titles including Death, Shinnok's Wrath, He Who Shall Not Be Named, Prince of Darkness, Death's Hand, Death's Shadow, Angel of Death, Dead One, Shadow of the Netherrealm

Superhuman Physical Characteristics (Possesses superhuman strength allowing him to rip spines and breaks others to pieces, shred people in half, resist strong winds, etc.), Martial Arts (Ninjutsu, Hapkido, Pi Gua, Monkey), Weapon Mastery (Wields swords and daggers), Stealth Mastery (As a Lin Kuei assassin, he is highly experienced in Ninjutsu techniques. Infiltrated the Netherrealm, Temple of Elements and the Shaolin Temples all by himself), Ice Manipulation (Can create ice by absorbing air/freezing water vapors), Acrobatics (Exercises enhanced condition, hypermobility, all-terrain mobility and self-momentum.. Can scale massive walls, jump through windows, perform slide attacks, etc.), Absolute Zero (Can generate ice as cold as -500°F), Aura ( Can cause others who touch him to be frozen), Intangibility (Can turn his body into ice), Teleportation (Able to turn into ice before reforming elsewhere), Healing with Herbal Healers and Dit Dow Formulas (Can replenish health & heal injuries), Statistics Amplification with Urns of Strength (Can increase his strength), Non-Physical Interaction (Can physically harm the elemental gods who are made of the element they represent)

Superhuman Physical Characteristics (Possesses superhuman strength allowing him to knock heads out, lift people over him, break skulls, rip others in half, etc.), Martial Arts (Ninjutsu, Hapkido, Pi Gua, & Monkey), Weapon Mastery (Wields sickles, scythes, hammers, shurikens, swords), Stealth Mastery (As a former Lin Kuei assassin, he possesses experience in Ninjutsu techniques. Successfully ambushed Goro, Jacqui, Jax & Hanzo using stealth), Acrobatics (Still retains his agility, but can now do mid-air jumps), Immortality (Types 1, 2, and 7. Pierces his sickle through his own chest without any harm Noob states in an intro dialogue that "the dead cannot die". He even says that Quan Chi's creations do not die easily, which should include Noob Saibot), Magic (Made a spell circle), Regeneration (Low-Mid. Can quickly heal from pulling out an entire sickle inside his chest), Darkness Manipulation (Can manipulate and create darkness for various purpose, such as raising the dead and turning others to demons via shadows, making shadow weapons, vanishing from sight, creating shadow clones and even turn into a dark substance or phase through objects), Duplication (Can duplicate the shadow clones and weapons), Teleportation (Can teleport by himself, to his clones and his weapons), Portal Creation (Can summon dark portals that can break down and erase victims who pass through them), Flight (True flight), Soul Manipulation (His Netherrealm power also includes the power to consume souls. Was able to consume the souls of a Soulnado which made him stronger and legion referring to how Noob holds many souls in him, those having been enslaved and consumed by him), BFR (Can banish his enemies using portals), Density Manipulation (Can make his clone intangible, liquid or solid enough to be bulletproof) Sound Manipulation (Mimicked Sektor's grunt. Can change his clone's voice), Power Nullification (Able to prevent the use of powers with Ghostball), Power Bestowal (Gave Smoke his corruptive powers), Dimensional Storage (Can store his items in portals), Status Effect Inducement (Can bind opponents to his portal's tendrils), Self-Sustenance (Type 2), Resistance to Soul Manipulation (Was pushed into a Soulnado that exploded and survived)

Attack Potency: Large Building level (Killed Human Hanzo, tried to later fight his Wraith self. Knocked down a large statue of Shinnok with a dropkick) | Large Building level (Caused a soulnado to explode. Fought Jax and Jacqui Briggs), likely City level (Briefly injured Grandmaster Hanzo with a sneak attack, later fought Hanzo or Kuai Liang while one of his clones was fighting Kuai Liang/Hanzo. Claimed to have surpassed Quan Chi and being perfected next to Revenants, which should include Liu Kang) | City level (Defeated and killed Fujin, the Water God, the Earth God, the Fire God and Quan Chi)

Intelligence: Gifted. He is a dangerous spy and schemer as a wraith. As a Lin Kuei recruit, he honed his ice powers at a young age, and is a skilled technology user which helped him reactivate Smoke's cyborg body and reprogrammed him to fight for Noob.

As the Elder Sub-Zero: 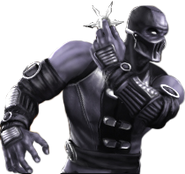 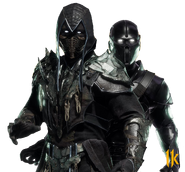 Noob Saibot returns in MK11.
Add a photo to this gallery