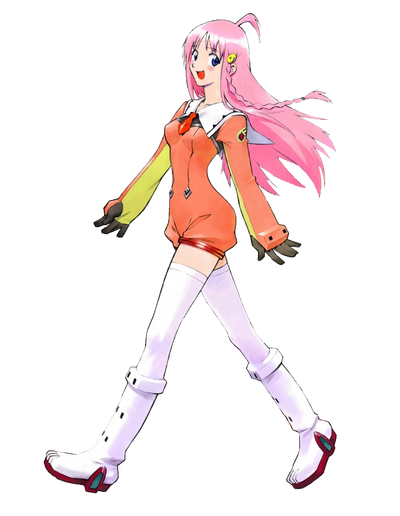 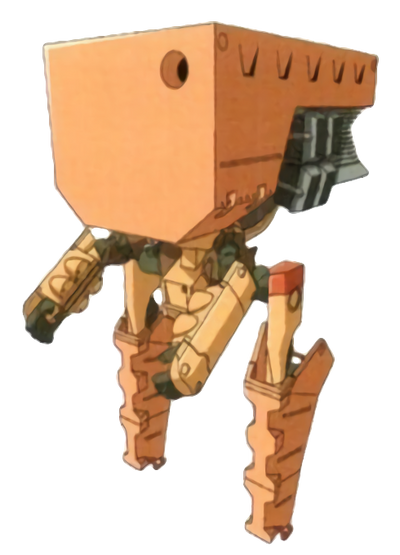 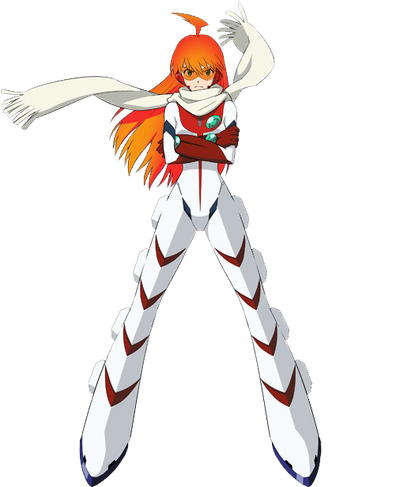 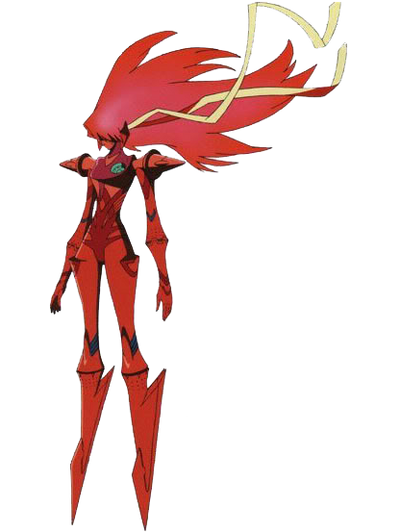 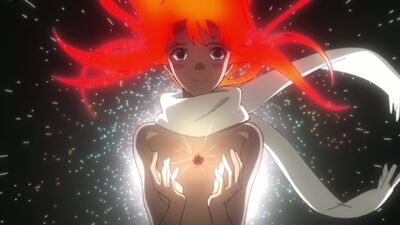 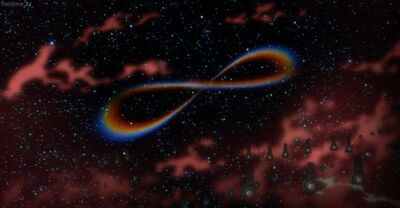 Nono (ノノ) is the main character of Top o Nerae 2!: Diebuster. Her goal in life is to become a great space pilot like her hero, Nono-Riri.[1]

In order to one day realize her dream of becoming a space pilot, this young girl left her home in a lonely, snowbound village and made her way on her own to the big city. She has a bubbly personality and is very optimistic. On top of being naive, she's extremely klutzy, but isn't fazed by occasional failures. She meets Lal'C, a real-life "Topless" space pilot, and one-sidedly adores her as "Oné-sama". Nono works hard every day adhering to "hard work and guts", to bring her closer to the person she adores.

Nono has continually desired her own Buster Machine, but her true form is that of a Buster Machine, wearing a space uniform. Her full name is Earth Imperial Space Force Sol System Close Coverage Squadron Direct Attachment Sixth-Generation Interstellar Cruise Ultimate Weapon, Buster Machine #7. Created to be the autonomous artificial intelligence unit to serve as the central terminal of the Buster Legion, and the pivot of the Sol System defenses. Around her neck is wound the muffler given by Oné-sama.

Attack Potency: At least Planet level (Created a Degeneracy Generator[3]), can ignore conventional durability via micro black holes | Unknown (Counterpart to the RX-7 machines in Top o Nerae! and her support container also contains various sets of nuclear warheads) | At least Star level (Re-wrote the surrounding physical space, and generated a series of micro black holes to seal Black Hole Exelio[4]), likely Solar System level[note 1] (Can induce a star system-scale runaway degeneracy effect[5]) to higher with Inazuma Double Kick (With the help of Lal'C, have vaporized Exelio Variable Gravity Well and split the event horizon of the Black Hole Exelio[6]), can ignore conventional durability via micro black holes and other ways | Solar System level (Power is 12,000 times that of a normal Buster Beam[7], the combat power is overwhelmingly enough to surpass the full strength of the Galactic Core Assault Fleet including the old-generation Buster Machine, yet should still be inferior to the output to the previous generation machine, Great Gunbuster. Potentially higher if completed as originally it was supposed to use Black Hole Exelio as the main power source and superior to Great Gunbuster) | Universe level+ (Prevented the formation of a new Big Bang[8][note 2] and transcended beyond time itself[9])

Lifting Strength: At least Class Y (Held a Black Hole much heavier than Earth within her hands, without any visible effort[11]) | Unknown | At least Class Y (Should be at least equal to before. Caused the split half of Titan to move at massively hypersonic+ speeds with her Buster Beam[12]) | Class Y to Stellar (Halted the momentum of Douze-Mille moving at relativistic speeds[13]), potentially higher | Immeasurable (Casually held the Big Bang with only one hand[14])

Intelligence: Above average; Despite her usual idiocy, she takes to learning the controls to a Buster Machine incredibly quickly, but have damaged memory pre-awakened | Created to be the autonomous artificial intelligence unit to serve as the central terminal of the Buster Legion, and the pivot of the Sol System defenses. Beastron-class have high intelligence and have the ability to think and strategize on coordinating and engaging in duties.

Standard Tactics: Unknown, varies depending on the situation, though she is subconsciously trying to emulate Noriko's behavior. One of her signature moves is the Inazuma Kick, Buster Beams and Hard Work and Guts -- the force of pure emotional energy, motivation, will and dedication to one's cause. However, she is not one to kamikaze her way to victory unlike those of her predecessors. Opting to surpass limits, and more Hard Work and Guts with the help of her BFF.

Weaknesses: Unaware of her powers at first pre-awakened, very naive and clumsy | Fodder mecha | Unknown | Incomplete, which may cause performance degradation | None notable

- Military-use mobile machine weapons. Uses hand-held arms such as grenade launchers. Useless against the large scale threats that Buster Machines are made to counter, these standard-use units serve as basic defense models for the Space Patrol and in a support capacity for the Fraternity. Leg components have also been changed for space use.

- The Earth Imperial Space Force―Sol System absolute defense-use super large humanoid ultimate battle weapon. A composite body exceeding 10,000 km in total length, made from the countless space monsters that formed the Red Milky Way―the Sol System Absolute Defense System. Equipped with many assault weapons, such as the Buster Beam and Buster Collider. Its special attack is the Ultra Lightning Kick. By reconstructing the body it can repair damage. 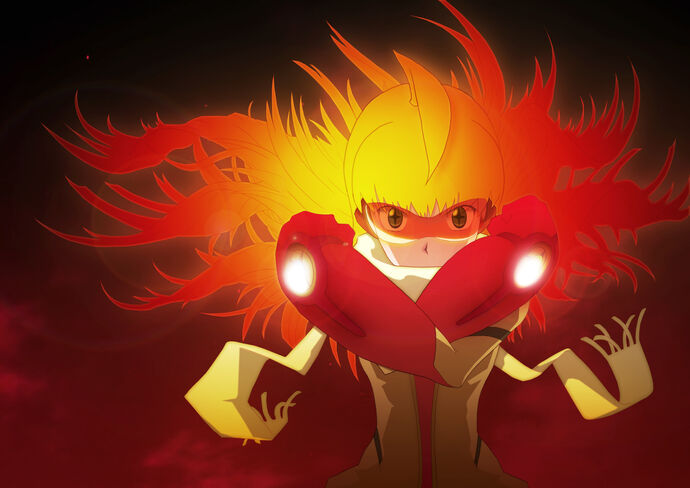 Buster Machine Form: The last Buster Machine of the same generation manufactured during the golden age of the Earth Empire, the true form of Nono. An autonomous artificial intelligence body that takes over command and control of the Buster Corps, based on the concept of ultra-high-performance aircraft that integrates the functions of space battleships, machine weapons, and personnel handling in human size. Although the combat power is slightly inferior compared to Gunbuster where the fourth generation technology is used, it greatly surpasses it in general function. The biggest feature is the development of the thought promotion system, which is the fifth generation technology used in Eltrium, the physical law conversion mechanism of the "physical reactor". 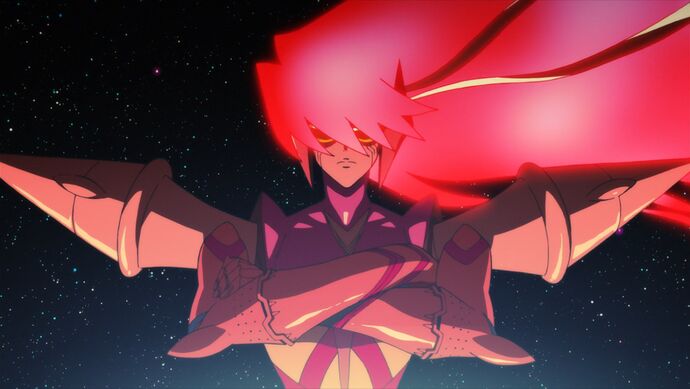 Diebuster Form: Nono can summon all of the Buster Legion in the Solar System and combine them into a giant mech larger than the earth, the final weapon of the Sol System Absolute Defense System and 12,000 times as much firepower, as well as the ability to electrocute enemies. The remaining aircraft of the Buster Corps are assembled like cells, with Buster Machine #7 (Nono), the command and control device, as the core. It completely surpasses the largest Buster Machine #3 in size. The design of the appearance imitates the figure of Noriko Takaya in the battle uniform of the Top Squadron. 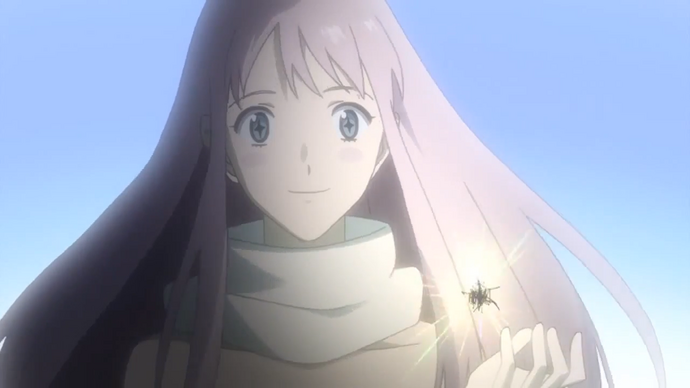 The concept of the sixth generation is a combined machine of the crew member, the ship and a robot.[2] What will become of the "sixth generation" spaceship after that is the key to solving the mystery of Nono being Buster Machine #7. Seeing the appearance of #7 in which we call the sixth generation, noticing that it was miniaturized and moreover a human type. However, it is natural that Eltreum is equipped with about 56,000 people and 800 machine weapons, so it will become a huge ship. Conversely, it can be reduced if you do not need to put things or people inside. It is the figure of the 6th generation spaceship that made the spacecraft and machine weapons, the captain, the steering hand, the engineer and the crew members all concurrent.

In order to realize it will be necessary to make the size small enough with the word "thorough", or rather physically impossible. However, the technology that enabled that impossibility was already installed in the fifth generation. That technology is the Algorithmic Image System. The method of propulsion is by rewriting the physical law of the surrounding space and mathematically changing its position and if applied to a substance, it should be possible to produce any object, even a compacted degeneracy generator if necessary. In the fifth generation, only limited cases of promotion in outer space were rewritten, but in the sixth generation it became a science-made magic wand that changes anything. It seems that the suits, goggles, Buster Missiles and the like when Nono transformed into the appearance of Buster Machine #7 were created by rewriting the surrounding aether and substances that were in Pluto. Of course, at this time, because of the equipment, and because the inside of the body was changed for battle, the weight of Nono as #7 will be over 49 kg. If it enters into an ordinary building, it will be as if the floor will collapse. However, if you enter such a general house, you should rewrite the influencing gravitons and make it apparently "not heavy", or just rewrite it sooner to restore the original weight of 49 kg. During her inspection by the Fraternity, no matter how thoroughly investigated the inside of the body was when it is not in Buster Machine form, no suspicious parts were found, such as a beam gun missile. It was neither an oversight by the inspector nor a translation of fraud. It is only suspicious that at the time of the survey, there were no devices that seem to be thought of as a "rewriting system" (a physical reactor described later) in the body of Nono.[2] In any case, it will create the necessary equipment, such as armed weapons, and move to a minimal system if not necessary. If you are in the shape of a human being, storage space and handling problems are less likely to occur. Only one human has increased in normal handling. Even when ordering, it is all okay if you call the battle weapon officer to the office and verbally speak. The sixth generation can be said to be a battle weapon that is minimal and reasonable. 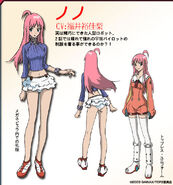 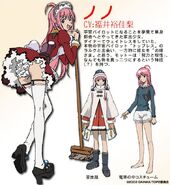 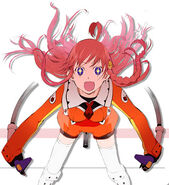 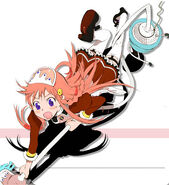 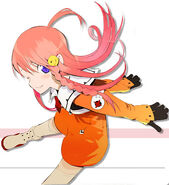 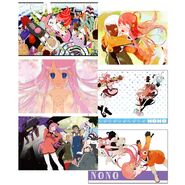 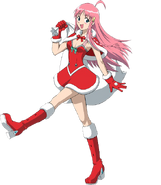 - Nono appears in a cameo in the bathhouse episode of Tengen Toppa Gurren Lagann, along with Lal'C, Asuka, Rei, and Mahoro.[45]

- Diebuster is 12,000km as tall as the Earth's diameter, which is the name of Lal'C's Douz-Mille (12,000 in French), which is also the number of years between the events of Gunbuster and Diebuster, and its multiplier in power.