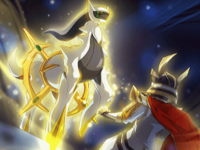 Non-Corporeal (or Incorporeal) beings are those who have no true physical form. Though they may have physical avatars or bodies, but their true essence exists non-physically, whether as a soul, as energy, or as an abstract concept. Being non-corporeal is very different than Intangibility, as an intangible being's body is their true body, it just can't be affected by conventional physical forces. A non-corporeal being does not usually have any kind of concrete, defined form, and can appear in many different forms if they wish, though the destruction of these bodies is of little relevance to the entity behind them.

Incorporeal beings can be killed through;

among other means. Some Non-Corporeal beings, for example, require bodies to survive, and therefore can be killed by destroying their bodies and keeping them from getting any hosts.

As with all example lists, this is not comprehensive.

Start a Discussion Discussions about Non-Corporeal