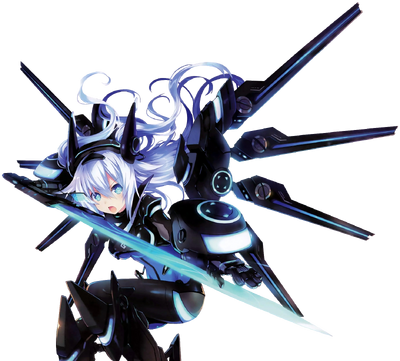 Noire (aka Black Heart) is the Goddess/CPU of Lastation of the "Hyperdimension Neptunia" franchise.

As one of the four Goddesses of Gamindustri, she has fought the other Goddesses for hundreds of years in the Console wars for control of Gamindustri and title of True Goddess. Just like other Goddess, she believed Neptune was a big threat and teamed up with them to beat Neptune. After the fight, she returned to Lastation, but her country was taken over by Expo Tech and she couldn't do anything about it until Neptune with her gang come and help her.

Noire is known as the ideal Goddess. She is very polite and generally respectful to everyone and puts her entire being into everything she does. However, she comes off as hard-headed due to only wanting to do things alone and without others, refusing their aid unless she has no choice. She only wants to bring improvement for the better, but she tries too hard and ends up either letting her efforts go to waste or simply making herself ill.

As Goddess, Noire can transform into her CPU counterpart: Black Heart. As Black Heart, Noire goes from being a polite and calm tempered girl to a very tough and competitive one who openly states rude or sarcastic comments, usually with a small smirk. Mysterious and fought several times before she joins the party, Black Heart is very aggressive towards Neptune and holds a strong grudge against her or rather Purple Heart.

Noire is the Personification of Sony's PlayStation consoles, referenced through her appearance in both forms, her processor units, and some of her dialogue.

Powers and Abilities: Superhuman Physical Characteristics, Weapon Mastery (wields a gun and a sword, but she usually use a Rapier), Adept in martial arts, can transform into her goddess form via Hard Drive Divinity | Flight in her Goddess Form, Immortality (Type 1)

Attack Potency: At least Town level (Comparable to Neptune), possibly Planet level (As strong as Blanc, whose hammer is stated to harbor the power to crush entire planets) | Universe level+ (Slightly weaker than Histoire) | Varies depending on the amount of Shares. At least Small City level+, possibly Planet level with low Shares, Universe level+ at average Shares, Low Multiverse level at high Shares (Equal to the other CPUs such as Purple Heart) | At least Low Multiverse level (Stronger than HDD Rei in her prime, as the NEXT Forms are above any HDD form ever seen)

Speed: At least Supersonic | At least Hypersonic (She can match up with Neptune's speed without trouble) | Unknown

Weaknesses: Noire is a hard-headed person and she doesn't want to rely on other people's help. Her Goddess Powers are powered by the Share Energy of her Continent Lastation (Share Energy is basically the amount of Faith the people put into the Goddess). So if her Share Energy were to be drained then her transformation will be cancelled out.

Key: BoS Base | Current Base | Black Heart | Next Black