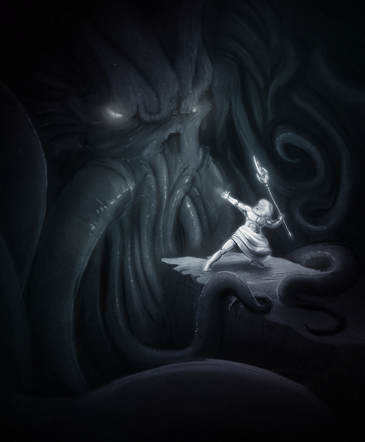 Nodens is an Elder God within H.P. Lovecraft's Cthulhu Mythos and a very mysterious entity even within the setting. His first and only appearance was in the story, The Dream-Quest of Unknown Kadath where he aids Randolph Carter in escaping from the clutches of the Crawling Chaos. He is served by the Nightgaunts, who revere him as their lord and master.

Name: Nodens, Lord of the Great Abyss, Nuada of the Silver Hand

Durability: Outerverse level (Fights against the likes of the Black Pharaoh for sport)

Intelligence: Nigh-Omniscient (Knew exactly where Randolph Carter was throughout the entire multiverse at all times)

Note: Nodens is the first of the "Elder Gods", though at the time he was introduced that term did not exist in the Mythos. Still, he appeared in "The Dream-Quest of Unknown Kadath" and is thus canon to the original Mythos.