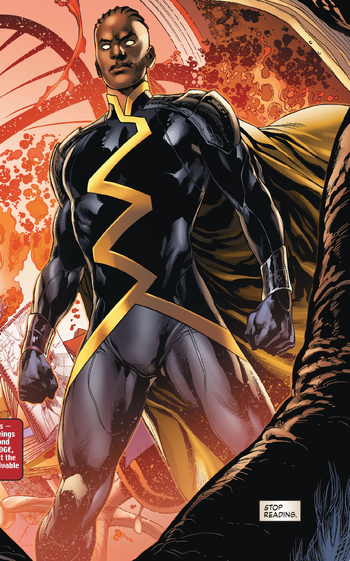 Nix Uotan is the final remaining member of the Monitor race, splinters of Mar Novu that functioned as interfaces between Monitor-Mind and the Multiverse. Uotan played a key role in resolving the events of Final Crisis, defeating Rox Ogama and restoring Earth-51 to the Orrery. All Monitors except Nix Uotan were erased by Monitor-Mind, their story over, while Uotan remained as the sole direct interface between Monitor-Mind and the Multiverse.

Classification: The Multiversal Monitor, Judge of All Evil

Cosmic Awareness (Can see what's happening throughout reality), Creation and Space-Time Manipulation (Rebuilt Earth-51 for the Orrery), Summoning (Can summon any other being to his side), Radiation Manipulation (Fired red sun radiation from a hundred stories), Resurrection (Revived Godhead Darkseid after his death in Final Crisis), Resistance to Mind Manipulation and Morality Manipulation (Was completely unaffected by Anti-Life even as a powerless human)

Attack Potency: Solar System level (Easily blasted through Kyle Rayner's construct and overpowered him) | Outerverse level (The Monitors are each fractions of Mar Novu, existing as Primal Forms in a Fundamental World)

Durability: Solar System level (Able to take attacks from other Monitors), Universe level+ with personal shields (Nix Uotan's shields no-sold the destruction of Earth-51) | Outerverse level (Equal to others of his kind, who withstood the explosions of the clash between the Thought Robot and Mandrakk)

Intelligence: Supergenius (Comparable to other Monitors)