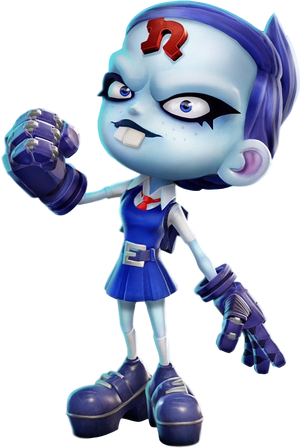 Nina Cortex is a recurring character and minor antagonist in the Crash Bandicoot franchise. She is Dr. Neo Cortex's beloved niece with bionic steel fists which were augmented on her due to Cortex seeing her love of cute, fluffy things and her general kindness as potentially a bad thing. He then sent her to Madame Amberly's Academy of Evil to change her behavior into something more unpleasant. However, she served as the main antagonist of Crash of the Titans, working for Uka Uka.

Attack Potency: At least City level (Comparable to Crash Bandicoot and Dr. Neo Cortex, having aided them in defeating the Evil Twins. Fought both the former and Spyro the Dragon in the crossover)

Speed: Supersonic+ with Massively Hypersonic+ or higher reaction speed (Can keep up with Crash and Cortex, even chasing down the former on Polar)

Range: Standard melee range to tens of meters with her bionic hands. At least hundreds of meters via power-ups

Intelligence: Above Average (Has an education from the Academy of Evil. Overthrew her uncle Cortex in Crash of the Titans)

Weaknesses: Is not great at fighting herself with limited options

Retrieved from "https://vsbattles.fandom.com/wiki/Nina_Cortex?oldid=5809535"
Community content is available under CC-BY-SA unless otherwise noted.