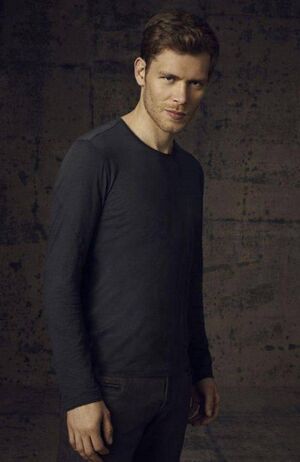 Niklaus "Klaus" Mikaelson is the Original Hybrid and one of the members of the Original family along with his most notable brother and sister, Elijah Mikaelson and Rebekah Mikaelson. He is the son of the witch Esther Mikaelson and a werewolf named Ansel. While anitially turned like the rest of his siblings into an Original Vampire, after breaking his curse he became the first and only Original Hybrid. For over 1000 years he has traveled the world gaining many allies but even more enemies due to his violent and brutal nature. He has at times been both main character, antagonist, protagonist and villain for both The Vampire Diaries/The Originals TV shows.

Powers and Abilities:  Superhuman Physical Characteristics, Immortality (1,3), Regeneration (High-Mid, superior healing to his bother Kol who regenerated after Damon Salvatore dismembered him), Mind Compulsion (Can control an individual into doing their bidding after making eye contact, Original Vampires are capable of compelling other vampires as well), Limited Empathy Manipulation (Can compel an individual into ignoring or turning off their emotions by "compulsion"), Illusion Creation, Resistance to Empathy Manipulation (A vampire can shut off their own emotions effectively becoming an being without humanity, though a very powerful emotional shock can turn them back on), Telepathy (Can get inside the minds of individuals and look for information through physical contact), Dream Manipulation (A vampire can both produce and modify dreams, create nightmares and lucid dreaming, as well as distort an individual's perception of reality effectively trapping someone in their dream.), Resurrection (Any vampire can resurrect themselves if they were to drown or die due to oxygen deprivation, but they will die all over again if the reason they died in the first place isn't changed to something more favorable, effectively creating an endless cycle of life and death), Has a high pain tolerance, His blood can cure the effects of a werewolf or hybrid bite in vampires, Transformation (Can transform into his wolf form greatly increasing his already great strength.), Martial Arts, Skilled Swordsman, Transformation (Can transform into a werewolf to increase his physical abilities), Accelerated Development (Passive. Klaus, as the only original hybrid, also grows stronger with age, similar to non-original vampires, original vampires, and non-original hybrids, etc.), Corruption (Vampires are able to turn humans into vampires with their blood), Enhanced Senses, Resistance to Mind Manipulation (Vampires have been shown to have limited resistance to other vampire's compulsion and require them to be severely weakened in order for them to be manipulated)

Stamina: Very high (Took on 12 newly created hybrids and killed them all without getting winded, Took on Marcel's army and at the end of the fight he showed no signs of fatigue)

Intelligence: Above average (Has over 1000 years of combat & survival experience, has been stated as being the most intelligent of his siblings only being rivaled by his half -brother Elijah, Has proven time and time again that he can make a plan ahead of time to take on any advisory and has been said by himself and numerous others to "always have a back up plan")

Weaknesses: Standard Original Hybrid weaknesses (Fire, Being stabbed with a wooden object through the heart (though being stabbed in this way will not kill an Original Hybrid but will render them in a dead-like state for several hours, though Klaus has been shown waking up in shorter amounts of time), Decapitation (Unlike a normal vampire an Original Hybrid will heal if there head is removed, however it is hinted that this will take some time, as Damon once stated he tried everything including dismembering & even placing some parts in a blender when trying to kill an Original Vampire but he returned to normal after an unspecified amount of time and Klaus would have a stronger healing factor than a standard Original Vampire), Heart extraction (An Original Hybrid cannot be killed by this mean though they will enter a death-like state as their bodies regenerate a new one), Invitation, Vervain (a mystical herb/plant that will burn a vampire on contact with their skin or when injested and can dampen or temporarily hinder their healing factor (however this can also give them near immunity to being "compelled" by other vampires, White Oak Stake (A dagger made out of a magical tree; and up to a point the only known thing that could kill an Original Hybrid, though as of the series conclusion all White Oak Stakes have been destroyed.), Beast Blood (The toxic venom of a "Beast" like Lucien & Marcel are fatal to even an Original Hybrid, reacting similarly to a werewolf bite to a vampire or Original Vampire.)