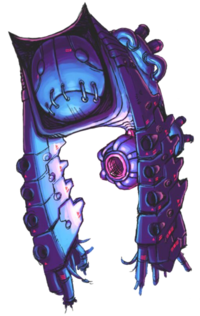 Nightmare is described as a "a Bio-Mechanical organism designed for military applications that possesses uncommon power and can manipulate gravity". Nightmare appears as a boss in both Metroid: Other M and Metroid Fusion, in which Samus has to defeat the creature while enduring its gravity manipulation abilities.

Origin: Metroid Fusion (Though appears first chronologically in Other M).

Powers and Abilities: Superhuman Physical Characteristics, Flight, Gravity Manipulation (Can intensify the local gravity to a point that even Samus' missiles, which functioned well in Zebe's/Tallon's 800-900x gravity, simply crashed to the ground upon use), limited Matter Manipulation (Started warping the background in Fusion upon activating its intense control of gravity), psuedo-Black Hole Creation (In Other M, shown producing black holes that attracted even energy attacks), Energy Projection (Can fire blasts of energy from its arms up to six at a time in Fusion, Other M depicts this as continuous lasers as well), Cyborgization (Normal). After being taken over by an X Parasite: Immortality (Type 7, was revealed to be decomposing as it fought Samus), Transformation (Reverted into a Core-X upon being defeated in its Nightmare form), Duplication (All X-Parasites are capable of doing this, even SA-X managed to have ten copies at one point), Intangibility (Immaterial), Possession (Physical contact will directly led to the inflicted being possessed).

Attack Potency: Planet level (Fought against Legendary Varia Suit and Fusion Varia Suit Samus Aran, Samus had to fight it three times to destroy it since it survived both fights in Other: M)

Speed: Massively FTL+ (Can blitz Samus in some degree by making itself lighter in the air, by just flying it was causing a whole sector to suffer quakes. Otherwise it is slower than Samus, but not by an extreme degree)

Striking Strength: Planet Class (Can do heavy damage to Samus by just ramming her, its lasers can significantly hurt Samus.)

Durability: Planet level (Survived a fight with Samus and its remains were still salvageable despite the fact that Samus hit him with everything she got, takes no damage from planet busting Power Bombs)

Stamina: Superhuman (Was rampaging around Sector 5 for a significant portion of the time Samus was traveling in the B.S.L., managed to recover quickly after its first fight with Samus in Other M.)

Intelligence: Unknown, likely Animalistic (From its cries, it can be assumed to be an infant for its species. However, it has been shown to be cunning, as it plays dead to ambush Samus upon her return from Sector Zero in Other M.)

Weaknesses: Directly attacking its mask will expose its face and freezing the Gravity Manipulator will nullify it temporarily.)