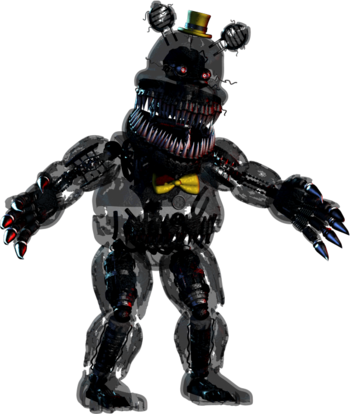 Attack Potency: Street level (Not only they can utilize their hard claws and teeth, their body's size is bigger than that of a human) | Wall level (Can casually kill the player. Comparable to other animatronics, like Rockstar Freddy, Rockstar Foxy, and Mr. Hippo who can pull themselves apart, tear apart and slice/cut apart humans. Can damage the human skull which is this level)

Speed: Unknown, at least Average Human (can blitz a child) | Superhuman (Blitz the player, comparable to the other animatronics)

Lifting Strength: At least Average Human (Comparable to the other Nightmare animatronics) | Class 1 to Class 5 (Comparable to other animatronics who can tear the Player apart. This would include ripping the limbs, and likely the head, off the body)

Standard Equipment: None | None

Intelligence: Unknown | Average (Can speak and understand english; Comparable to the other animatronics)

Weaknesses: None notable | Can be stunned by light. When invisibile, his eyes do not disappear.

Note: The FNAF 4 key is going by how powerful the character is in the Crying Child's illusions, due to UCN confirming that the characters in that game were only dreams.

Jason Voorhees (Friday the 13th) Jason’s profile (Reboot Jason was used, both were bloodlusted and speed was equalized)

Will Blake (Goosebumps) Will Blake's Profile (9-C versions were used, Speed was equalized)

Start a Discussion Discussions about Nightmare (Five Nights at Freddy's)