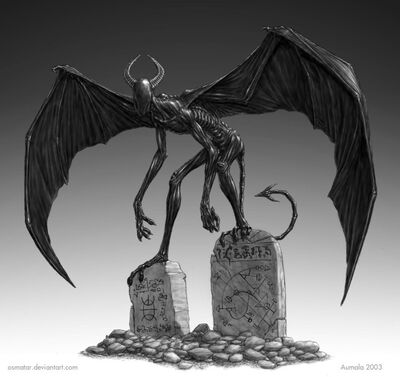 Night-gaunts are a species of flying creatures inhabiting Earth's Dreamlands. They are described as having smooth whale-like skin, curving horns, and a blank expanse of flesh where one would expect a face to be.

They revere and worship Nodens as their lord and master.

Classification: Servants of Nodens, Creatures of the Dreamlands

Attack Potency: Unknown, possibly Multiverse level+ (They have been described as being foils to Hunting Horrors, and thus should be able to harm them), or far higher (Apparently capable of fending off assaults from forces of the Outer Gods with their master)

Durability: Unknown, possibly Multiverse level+ (Possibly comparable to Hunting Horrors, who could effortlessly survive flying through the birth and death of endless universes) or far higher