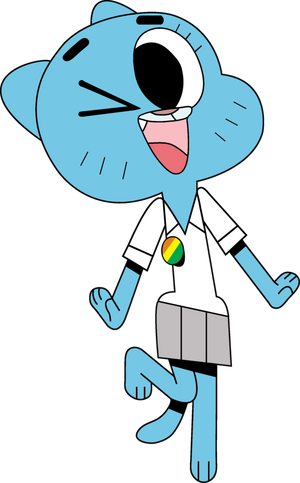 Nicole Watterson is one of the main characters in The Amazing World of Gumball. Nicole is the mother of the Watterson family. She is the only truly responsible member of the family. She is very dedicated to her family, and would do anything in her power to keep them comfortable and safe.

Origin: The Amazing World of Gumball

Powers and Abilities: Superhuman Physical Characteristics, Skilled in hand to hand combat, Acrobatics, Weapon Mastery (Skilled paintball gun marksman), Rage Power, Berserk Mode, Probability Manipulation via The Helmet, Can terrify people and control them just by being angry around them, Can turn into a red demon-like being and a hulking version of herself, Toon Force, Can sense trouble, Fourth wall awareness, Mind Manipulation and Age Manipulation (Can mind attack and age people with a "Penance Stare"), Fire Manipulation (With enough anger she can burn things just by looking at them), Energy Manipulation

Attack Potency: Building level (Fought Yuki Yoshida, who should be stronger than Masami, who could utilize natural lightning. Capable of fighting Mister Rex who should logically be superior to Tina Rex. Much stronger than her son, Gumball Watterson)

Speed: At least Subsonic (Keeps up with and outspeeds Gumball and Darwin on a regular basis)

Lifting Strength: Seemingly Class 5 (Someone's car is seen in the trash, possibly because she threw it in frustration of not getting a parking spot)

Durability: Building level (Should be physically superior to Gumball, who survived an explosion that destroyed Elmore Junior High)

Intelligence: Above Average (Highly skilled in both hand-to-hand and armed combat)

Weaknesses: Has a very short temper, especially when called a "loser". Suffers from heavy amounts of emotional stress.