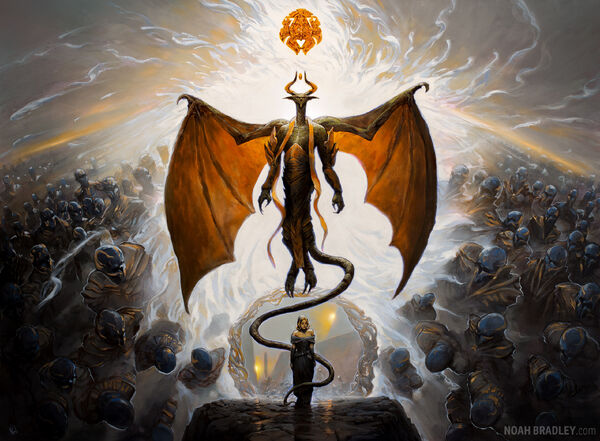 Nicol Bolas is the victor and only survivor of the multi-planar Dragon War, and the only original Elder Dragon left in the known MtG universe. At the peak of the Dragon War, his spark ignited and he ascended into a planeswalker.

Bolas has always desired more power, and will stop at nothing to get it. He orchestrated the release of the Eldrazi for reasons still unknown; and is one of the "Big 3" MtG villains, along with Phyrexia and the Eldrazi.

Powers and Abilities: Superhuman Physical Characteristics, Magic, Flight, Enhanced Senses, Fire Manipulation, Death Manipulation (Can kill beings of comparable power with a single touch), Precognition, Telepathy, Memory Manipulation (Wiped Jace Beleren's mind), Mind Reading, Mind Control (Capable of brainwashing and controlling other beings), Can shatter minds with the slightest contact of his body, Illusion Creation, Planeswalking (Teleportation/Dimensional Travel), Time Manipulation, Clockworking (Ability which lets him choose a desired timeline in the future and access it), Soul Manipulation, Reality Warping, Magic and Regeneration Negation (Capable of permanently killing entities who could otherwise recover from virtually any form of death, Stripped Gideon's powers from him with a touch), Avatar Creation, Can absorb mana from his foes or even from a few universes at once in order to strengthen himself, Can anchor his existence to a certain location and passively drain mana from there, Necromancy, Acid rains capable of erasing someone from existence, Possession, Resurrection of himself and others, Elemental Manipulation (Of the fire, water, and lightning variety), Instant Death Spells, Shapeshifting (His form is limited only by his imagination), Duplication, Sealing, Dimensional Manipulation, BFR, Immortality (Types 1, 3, 4 and 6), Regeneration (Mid-Godly. Returned even when Tetsuo Umezawa destroyed his body and killed Bolas' weakened essence after it had been severed from Dominaria.), Immunity to death-related spells and abilities, Resistance to magic, reality warping, time manipulation (Completely unfazed by Teferi's time manipulation and attacks, which he simply absorbed), fire (shrugged off the full power of Chandra Nalaar), mind manipulation (Even after allowing Jace into his mind and willingly lowering his mental defenses, the telepath was still completely helpless and ended up having his mind crushed by the Elder Dragon), memory manipulation, soul manipulation (Still fully capable of reforming himself after having his soul destroyed), and existence erasure (Even more resistant to the Blind Eternities than an average Planeswalker) | All Oldwalkers have Immortality (Types 1,3,7,8 and 9) and Non-Corporeal (All planeswalkers forms are a manifestation as their will.)

Attack Potency: At least Multi-Solar System level (One of the strongest Planeswalkers left in the multiverse, thus vastly superior to Elspeth, who was unable to defeat one of Nicol Bolas' generals on her own during the Shards of Alara arc. Elspeth tanked attacks from Heliod and killed Xenagos, both of whom are essentially living constellations. Kruphix, chief among Theros' deities, saw Nicol Bolas as a threat that the gods of Theros could not overcome, and that he would be their doom should he ever set his sights on their plane. Defeated all eight gods of Amonkhet, who are directly linked to the plane's mana leylines. Said plane is large enough to contain a planet and two stars.). | Multiverse level+ (His casual attacks caused multiversal time rifts. Accidentally created the Madaran rift, which could have collapsed the multiverse if left unrepaired. Defeated Teferi, a planeswalker who is able to manipulate time over the entire multiverse by himself. On one occasion he held off the collapse of the multiverse by destroying Leshrac, who was weaker than himself. He and the other Elder Dragons tore up the fabric of countless planes as a side effect of their war, and this was before Bolas even became a Planeswalker. Had become so powerful that he required mana lines to anchor himself to a plane, lest the overwhelming force of his presence destroy its very foundation.)

Speed: Unknown (Orders of magnitude superior to most other current planeswalkers) | Likely Immeasurable (Able to exist outside the normal planes of the multiverse, having to willingly restrict himself in order to manifest within such a lower reality. Unaffected by changes to the timestream on a multiversal scale and Teferi's time manipulation)

Striking Strength: Unknown | Multiversal Class+ (Multiversal rifts were caused as a side-effect of his battle)

Durability: At least Multi-Solar System level (Vastly superior to Elspeth, whose Planeswalker spark prevented Heliod from killing her) | Multiverse level+ (Was not at all worried about the potential collapse of the multiverse, and time rifts spanning over the multiverse were completely ineffective on him. Took an untold number of attacks from other Elder Dragons.). In addition, he can negate magic potent enough to repair time rifts across the multiverse and possesses regeneration strong enough to completely reconstruct his body and soul

Stamina: Solely dependent on where he "anchors" himself, usually chooses a place where he has an infinite amount of mana. Outside of normal planes, his stamina is limitless.

Intelligence: Quality multiversal schemer and professional chessmaster, has complete mastery of three colors of mana and can invoke the strongest spells in the series

Weaknesses: Body hopping makes him somewhat weaker, and can be weakened through blocking his access to mana. This can only be accomplished if he is attempting to manifest somewhere.