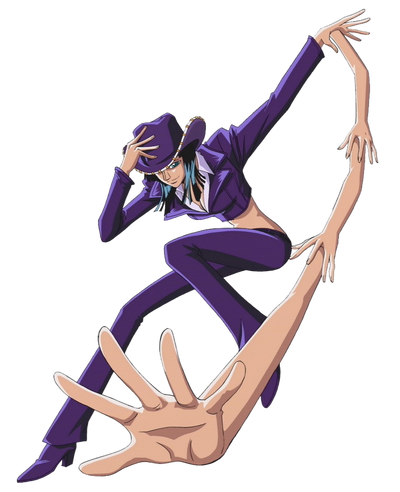 Adventurer, archaeologist, ex-Dragon, and Ms. Exposition, Nico Robin is one of the darker and more enigmatic members of the Straw Hats. Entering the story as the partner of the big bad Sir Crocodile, Robin asked to join the crew because Luffy had forced her to live, rather than die. Despite some initial mistrust, she gradually settled into the crew. Since those early uncertain days, she fully trusts the other Straw Hats and knows she's finally found her place in the world with them. She tends to be quite motherly toward Chopper while also playing the role of cool big sis for Nami. Her Devil Fruit, the Hana Hana no Mi (Flower-Flower Fruit), lets her sprout replicas of her limbs, and later her entire body, from any surface.

Unfortunately, her past eventually caught up to her and it was revealed that she's been on the run from the World Government for twenty years, after her home island of Ohara was razed, and a large bounty was placed on her head. However, after the rest of the crew proved that they were willing to essentially declare war on the World Government in order to get her back, she realized that she had finally found her place in life, and that she was not a burden to her new friends.

Her dream is to learn the history of the Void Century, a passage of time blacked out by the World Government, which is said to be written in a lost language scribed onto huge stone cubes called Poneglyphs. Simply learning the language of the Poneglyphs is a capital crime, and is the reason that everyone on her island, including her mother, were killed by the Marines. She is now one of only a handful of people in the world who can read them, allowing her to not only discover the true history of the world, but also to potentially revive a lost superweapon.

Same as before, Limited Flight (Can form wings from her limbs, but can only fly for 5 seconds), Transformation (Can change her limbs into various forms), Minor Resistance to Coma Inducement (Anyone who has their shadow stolen by Gecko Moria are sent into a two-day coma, but Robin recovered in minutes without any aid)

Attack Potency: Likely Small Town level (Was grouped together with the Monster Trio in strength, and easily defeated Yama) | At least Large Town level (Almost defeated Base Moria), possibly Small City level (Restrained Oars) | At least City level (Superior to Hakuba), likely Mountain level (Casually deflected a sword strike from Diamante, held her own against Trebol and blocked one of his attacks)

Speed: Massively Hypersonic (Kept up with Yama and dodged a lightning bolt fired from Enel's Raigo), presumably instant when creating/dispersing body parts with the Hana-Hana no mi | Massively Hypersonic+ (Pulled Nami out of the way of a Gomu Gomu no Pistol from Oars, who can blitz the likes of Zoro and Sanji) | At least Massively Hypersonic+ (Captured Hakuba immediately after noticing him, intercepted an attack from Trebol, and repeatedly outsped Diamante's attacks while protecting Rebecca)

Lifting Strength: Superhuman, likely Class M with her powers | At least Superhuman (Could lift and support the weight of Franky on top of her own without the direct use of her powers), Class G with her powers (Immobilized Oars and Moria) | At least Class G (Stopped the Thousand Sunny ship from colliding into an undersea mountain. Easily restrained one of the extremely strong Giant Kids on Punk Hazard and Cavendish/Hakuba)

Durability: Small Town level (Her duplicate limbs are used in every single one of her attacks, and her real body feels any damage they take. Withstood numerous attacks from Yama without suffering any notable injuries. Survived being blasted in the head by Enel's lightning) | At least Large Town level, possibly Small City level (Restricted the monstrous Oars without feeling any strain in her arms. Took hits from Oars and Moria) | At least City level, likely Mountain level (Restricted Hakuba without feeling any strain in her arms. She was fine after taking several of Diamante's spiked iron balls to the back)

Stamina: High, has handled many armed soldiers with her hands with no showings of fatigue and was stabbed by Crocodile and survived. Fought Yama and took several attacks from his Axe Dials in order to protect Skypiea's ruins. After repeatedly beaten by Spandam while trapped in seastone handcuffs (which included his elephant sword Funkfreed in its animal form driving her hard enough into a wall to leave a crater), once freed she went on to beat him up and help fight off over 200 marine officers. She was stabbed in the shoulder with a giant ice pick by Monet and showed no signs of being hurt throughout the rest of the arc. Protected Rebecca from Diamante's Death Enjambre while being severely injured in the process.

Range: As far as she can see, although has occasionally demonstrated the ability to sprout body parts in places she can't see.

Intelligence: Genius. Nico Robin is extremely intelligent with extensive knowledge of the world, especially in regards to historical matter, remarkably insightful and very experienced in the use of her Devil Fruit ability. A child prodigy, she passed her archaeological exams to become a certified scholar at the young age of 8, and also taught herself to read the ancient texts on the poneglyphs. She learned these skills on her own by researching in the library of Ohara, done without any help from Professor Clover or the rest of her adult colleagues. As the Vice President of Baroque Works, her intellect along with her leadership had been 'invaluable' to the organization, according to Crocodile himself. Due to living most of her life on the run from the Marines and the World Government, she is a skilled and battle-hardened combatant, being able to hold her own against opponents that are faster and stronger than she is.

Weaknesses: Standard Devil Fruit users weaknesses. She feels anything her duplicate limbs feels, will take damage to her real body if they’re attacked, can't create limbs where there is not enough room and while each part is capable of that part’s normal movements, the body part itself is bound to where it was sprouted from, and typically remains stationary when using her powers though she doesn't have to. Because of her reverence for history and the past, she refuses to fight in places where there are ancient artifacts and leaves herself vulnerable to her opponent’s attacks. She can only fly for 5 seconds (but that was before the timeskip, it hasn't been confirmed if she's improved her flight time or not after her training). 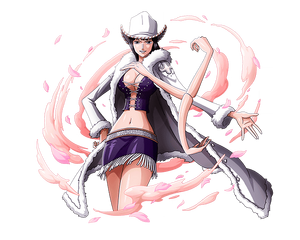 Hana Hana no Mi (Flower-Flower Fruit) is a Paramecia-type Devil Fruit, this fruit allows the user to replicate and sprout pieces of their body multiple times from the surface of any object or living thing. The fruit's major strength, as demonstrated by Nico Robin, is the ability to sprout multiple body parts on any surface including the user's own body, except seastone. With this ability the user can take on many attackers by using many sprouted limbs. Since the user is practically the only one who knows where their limbs will sprout out, they have the element of surprise on their side. Another strength is that the user can also create body parts like an eye in order to gather information. Aside from the standard Devil Fruit weaknesses that a user falls prey to, the user of the Hana Hana no Mi has some weaknesses unique to themselves. The user will gain damage to their body if the extra limbs are attacked and can feel the pain. According to Oda, the user has a radius of 200 Hana Hanas in which they can extend parts of their body. 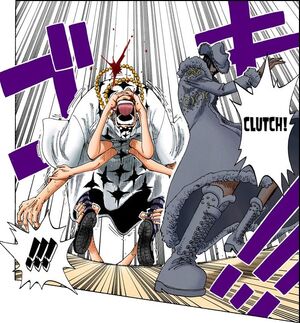 Note: Not to be confused with the similarly named character from DC Comics. 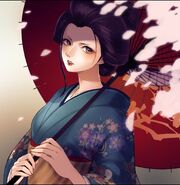 O-Robi
Add a photo to this gallery