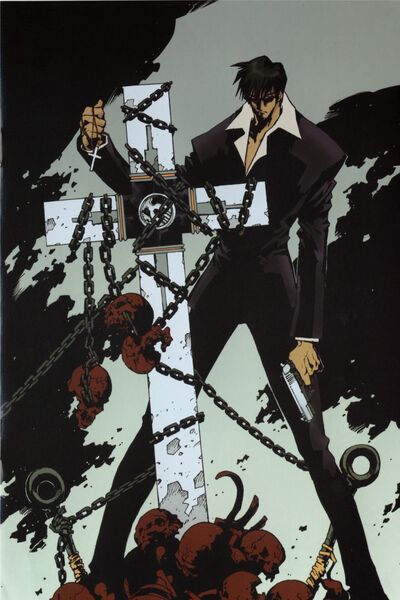 Attack Potency: Town level (Better than Monev the Gale and was able to kill him with ease) | City level (Drugs make him equal to base Vash)

Lifting Strength: Unknown. At least Peak Human+ (Carries and swings around the Punisher)

Standard Equipment: Wolfwood's main weapon is the Punisher, a cross shaped multi gun beast of a fire arm. It has a minigun in the front and its bullets can slice through 5 layers of pure Titanium with ease, the bullets are also way faster then regular bullets. The punisher also carries a rocket launcher in the shorter part of the cross. The rocket is so powerful it can one shot a town level durability character.

Weaknesses: If he over uses the enhancement drugs his heart will stop.

Key: Base | With Enhancement Drugs