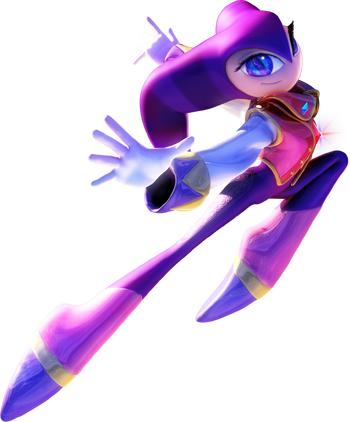 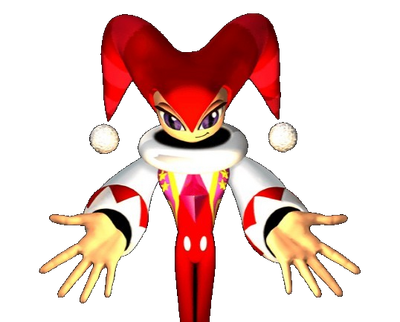 NiGHTS is a first level Nightmaren from the Night Dimension and the main protagonist of the NiGHTS franchise. Created by Wizeman to serve under him, NiGHTS rose up against his master and, teaming up with multiple children who stumbled upon his realm, defeats Wizeman and raises the children's' self-confidence.

Gender: Varies, sometimes referred to as male or gender-neutral

Classification: Nightmaren, Archetype Of The Shadows And a Jester (According To Yuji Naka)

Powers and Abilities: Superhuman Physical Characteristics, Shapeshifting, Transformation, Immortality (Type 1 and 8; Wizeman and his creations can't be destroyed as long as darkness exists within the hearts of men), Flight and Spaceflight, Magic, Portal Creation, Black Hole Creation, Self teleportation and teleportation of objects, Energy Manipulation (can manipulate lunar energy), Summoning, Jewelry Manipulation, Fusionism via Dualize (can assimilate one's body with his own), Light Manipulation, Decent-Strong Dream Manipulation, Telepathy, Self-Sustenance (Type 1; doesn't need to breathe underwater or the void of space), Resistance to Extreme Cold, Cosmic Radiation (Can fight in the void of space), and Mind Control Along with Mind Manipulation (Can resist Wizeman's will despite being created by him, Can influence other's thoughts to a lesser realist level at lowest and their psyche and very consciousness at best and has been shown to have abilities relative to Wizeman), Conceptual Manipulation (Likely Type 2. Manipulation/Changing/Harming objects of Jung's archetypes and the collective conscious/unconscious which are mostly/nearly/completely transcendent of reality, Conceptual Anchoring: Can survive the destruction of all Nightmarens and Wizeman despite being in sync/linked/chained to their existence), Immortality (Type 8: NiGHTS seems to be able to live forever on his own self and even without that as a last resort of life he relies on the minds and nightmares/dreams of others to live, which is said to allow him to live for a long time),  Creation, Reality Warping, and perhaps Pocket Reality Manipulation (As NiGHTS, Nightopians, Nightmarens and the like can create Spaces/Realms/Dreams/Worlds/Environments/Spaces with no set shape)

Attack Potency: At least Low Multiverse level, possibly Multiverse level (Defeated Wizeman multiple times, who created the Dream World, which visibly contains a multitude of star systems and was stated to be an entire parallel universe next to the Waking World and have its own flow of time. It also contains countless worlds known as "Dream Worlds" for each and ever living human in Waking World formed from their unconscious. Each dream world has shown starry skies, nebulae, and galaxies. It was stated that Wizeman was going to destroy the Dream World, when the latter is made up of many different visitors' own separate worlds. Wizeman also has complete control over, and created, Nightmare, a dimension of void where people with bad dreams end up in, and can manipulate, bend, and reshape it as he pleases)

Intelligence: Gifted (Even without any special training, he is an adept combatant able to fight the very being who created him)