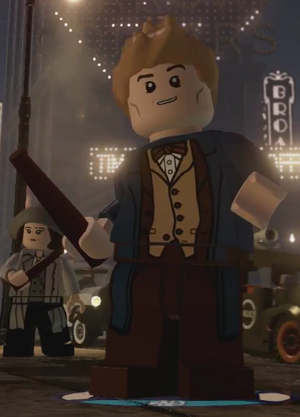 Newton Artemis Fido "Newt" Scamander, O.M. (Second Class), (b. 1897) is a famed Magizoologist and author of Fantastic Beasts and Where to Find Them. Scamander developed an interest in magical creatures early in life, influenced by his mother's breeding of hippogriffs. After attending and being expelled from Hogwarts School of Witchcraft and Wizardry, Scamander joined the Ministry of Magic, spending two years in the Office for House-Elf Relocation before joining the Beast Division. In 1918, he was commissioned by Augustus Worme of Obscurus Books to write Fantastic Beasts and Where to Find Them. The book became a best seller, making Scamander a respected expert in the field of Magizoology.

In his personal life, Scamander married Porpentina Goldstein, and fathered at least one child. By the beginning of the 1990's, Scamander was retired and living in Dorset.

Tier: 9-B physically, 8-C via Telekinesis and Magic

Attack Potency: Wall level physically (Comparable to other characters who can destroy gargoyles with their punches), Building level via Telekinesis and Magic (Can build and destroy building-sized objects)

Speed: Peak Human (Comparable to other characters) with Superhuman reaction and combat speed (Can deflect laser beams that move at the same speed as arrows)

Striking Strength: Wall Class physically (Can harm and kill other characters with his attacks), Building Class via Telekinesis and Magic (Can destroy building-sized objects)

Standard Equipment: His Wand, His Suitcase

Intelligence: Gifted. Is a very skilled wizard and is extremely knowledgeable when it comes to the subject of Magizoology and Herbology

Retrieved from "https://vsbattles.fandom.com/wiki/Newt_Scamander_(Lego)?oldid=6228346"
Community content is available under CC-BY-SA unless otherwise noted.