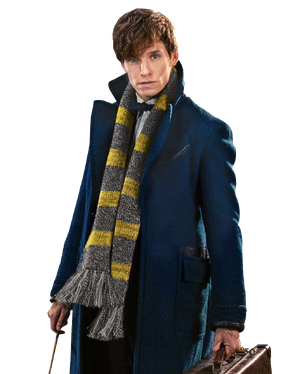 Newton Artemis Fido "Newt" Scamander, was a British wizard, famed Magizoologist and the author of Fantastic Beasts and Where to Find Them.

Attack Potency: Wall level physically (Comparable to other wizards), Building level with magic (Repelled Grindelwald's lightning, albeit barely. Should be comparable, if not superior, to his colleagues)

Speed: Average Human with Subsonic reactions (Comparable to other wizards)

Stamina: Above average, can stand up after being repeatedly blasted by spells

Range: Several dozen meters with spells, at least tens of kilometers with apparation

Standard Equipment: An unnamed wand and his suitcase

Intelligence: Unknown academically, knowledgeable when it comes to the subject of Magizoology and Herbology

Retrieved from "https://vsbattles.fandom.com/wiki/Newt_Scamander?oldid=6951268"
Community content is available under CC-BY-SA unless otherwise noted.