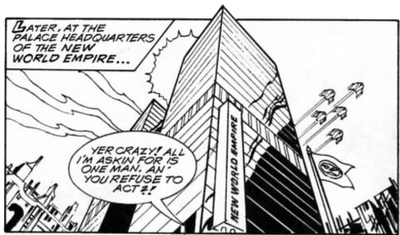 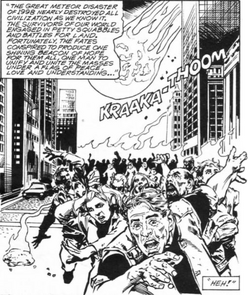 In 1998, a disaster called The Great Meteor Disaster destroyed all of Earth's civilizations. The survivors in the post-apocalypse fought for resources and land until one man united them all under the banner of the New World Empire. This man became their emperor and ruled over them to maintain peace for years.

Tier: Unknown, at least 9-B

Population: Comparable to the population of Earth

Territory: All of Earth

Technology/Abilities: They have space-faring technology and laser weaponry that can dispatch Wall level mutants and aliens with ease, and they have unified the Earth under a single empire and emperor.

Attack Potency: Unknown, at least Wall level (All military personnel are equipped with advanced weaponry that is capable of dispatching Wall level mutants with ease)

Power Source: Unknown, likely uses fossil fuels and alternative energy such as hydroelectricity and solar power, as they are still on Earth

Industrial Capacity: Unknown, but they established their empire quickly after The Great Meteor Disaster of 1998 under the leadership of the Emperor

Military Prowess: They have all of the technology that The Real World Earth had up to 1998, as well as having spaceships, laser weaponry such as laser pistols and SMGs, large space convoys, space carriers, airships and space stations

Weaknesses: The world being under the control of a single government has created great tension in the more impoverished, such as the derelict remnants of New York, where the local mutants desired to overthrow the government. After an alien invasion causes conflict for the military, the mutants led by Mortus, started to attack as well, causing a major war between the mutants and the empire.

Retrieved from "https://vsbattles.fandom.com/wiki/New_World_Empire?oldid=6006705"
Community content is available under CC-BY-SA unless otherwise noted.