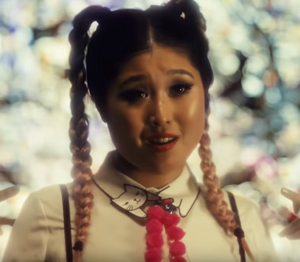 New Media is the reincarnation of Media, after she evolved herself to keep up with Mr. Wednesday's newfound power. Spunky, hip, and sometimes annoying, her new personality is a stark contrast to the careful and soft-spoken Goddess she used to be. Now armed with not just control over mass-media, but social media as well, she seeks to assist Mr. World in getting rid of the Old Gods through the manipulation of information all over America.

Superhuman Physical Characteristics, Immortality (Types 1, 3 and 8; She will never truly die for as long as American Mass-Media remains), Regeneration, Resurrection (Will never truly die, instead always reviving for as long as the things she personifies exist), Reality Warping, Information Manipulation, Technology Manipulation, Pocket Reality Manipulation, Creation, Mind Manipulation (Controlled the minds of every news anchor in America to falsely accuse Wednesday and Shadow of homicide), Godly Senses (Sees and hears through every TV Screen, Movie Screen, Smartphone, and Radio in America), Levitation, Telekinesis, Teleportation, Shapeshifting, Illusion Creation, Nigh-Omnipresence (New Gods have avatars that can exist everywhere at once), Adaptation (New Gods are capable of evolving into new forms whenever material relating to their concept evolves), Social Influencing (When Gods preach, people start to believe what they're saying), Immersion (Can enter the world of television screens)

All previous abilities in addition to, Abstract Existence (Exists as a living, personified idea, a reflection of America's obsession with entertainment), Time Stop (When Gods reveal their true forms, time stops in the real world). Non-Corporeal (Exists as an idea), Conceptual Manipulation (Type 3; Gods control the concepts they embody), Avatar Creation

Speed: Nigh-Omnipresent (Exists where every form of media exists)

Range: Likely Continental (Extends across all of American Mass-Media)

Intelligence: Incredibly Intelligent. Can see and hear through every Television, Movie Screen, Radio, and Smartphone in America. She is also responsible for finding ways to "rebrand" Old Gods that swear allegiance to the New Gods in order to grant them tributes.

Weaknesses: Gods can be permanently killed if they take their own lives, a symbolic gesture of losing faith in themselves.

Retrieved from "https://vsbattles.fandom.com/wiki/New_Media?oldid=5671834"
Community content is available under CC-BY-SA unless otherwise noted.