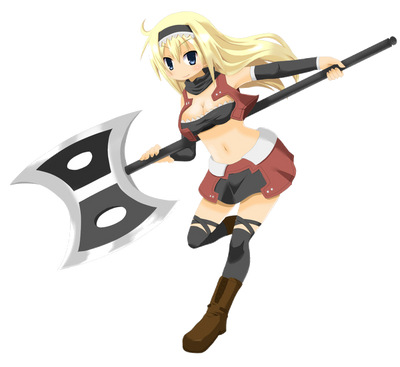 Neva is a Playable Character in Wonderful World. A female knight who works as a deputy head of the Metropolitan Rakleia Knights. Within the Order, as a cozy, and cool deputy head, She is admired by women's members. There are also places where she is a little bit stiff from the sense of mission saying that discipline is important and that it must be firm. She does not talk much about her inner face. Originally a nobleman, when leaving home and playing, she is impressed by the story of a knight heard by a strange old man in the neighborhood and aim for a knight. She was admitted to the Sword & Law sword academy at the age of 10. She is friends with Orphe. And she wanted to be a magic teacher, had been majoring in magic medicine, poor imagination, because it was not able to use the magic for purposes other than destruction, She was falling back. It is beautiful appearance and the altruistic magic contrasting with the altar's identity, which is often fiddled from the surroundings. After reopening in the middle and changing to the melee battle main, she will leave middle grades and become a splendid knight. Ryuza and the Eimeru Knights are friends, sometimes going together. While frustrated by their loose attitude, there are also clauses envying the air.

Durability:' Small Town level (According to this calc, Chartette's swing alone should be capable of this..)

Intelligence: Very High (Is a very tactical knight that sometimes alles with the Eimeru Knights.)

Feats: While she wanted to be a Magic Teacher, she instead dealed with being a Knight. While her Iron Ingot is ordinary, her magic is meant to be destructive. She also rose the ranks to be an expert Deputy.

Retrieved from "https://vsbattles.fandom.com/wiki/Neva_(Wonderful_World)?oldid=4120571"
Community content is available under CC-BY-SA unless otherwise noted.