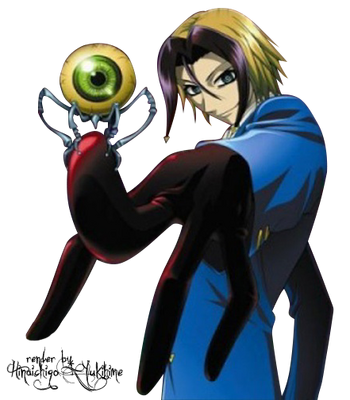 Neuro Nougami the title character of the Majin Tantei Nougami Neuro series, is a demon detective from hell. He looks for mysteries in the minds of humans for sustenance. When he dismantles the mystery and strips the culprit of all of their defenses, it releases the negative energies that caused the culprit to commit the crime, which he then consumes. He came to the human world in search of the Ultimate Mystery, as all of the mysteries in hell were bland and repetitive. Once in the human world, he forced Yako to be his assistant and began to solve mysteries.

Powers and Abilities: Superhuman Physical Characteristics, Genius Intelligence, Limited Transformation (Able to transform his hands into claws or partially transforming into his demon form while still retaining some of his human form features), Surface Scaling (Can walk or crawl on any surface with ease), Illusion Creation, Summoning, Regeneration (At least High-Low, able to reattach his hand after it was cut off), Fire Manipulation (Can create fire from his bare hands), Electricity Manipulation with Evil Pressure, Acid Manipulation with his saliva and Evil Blizzard, Flight with Evil Flyer, Extrasensory Perception (Able to sense murderous intent from others. Able to sense "hint of mysteries", which make him can go to the place that murderous thing occur before it happens), Absorption (Able to drain criminal's energy by consuming their mystery), Body Puppetry (Controlled Yako's body from some range several times), Mind Manipulation, (by coming in contact with targets, he is able to brainwash a person's mind and took control them), Fear-inducing with Demonic aura, Limited Life Manipulation (His aura was able to make Akane come back to life. Able to turn a bullet into a plant), Invisibility with Evil Blind and Evil Canceller, Hacking and Data Manipulation with Evil Script, Plant Manipulation with Evil Surrounder and Evil Tree, Enhanced Senses with tools like Evil Butterfly or Evil Friday, Information Analysis with Evil Javelin, Attack Reflection with Evil Reflector, Smoke Manipulation with Evil Full Face, Pain Manipulation with Evil Stringer, Time Travel with Evil Time Machine, Resistance to poison (Stated that miasma is like Oxygen to a demon), acid (Doesn't get any effect from his Evil Blizzard), high temperature (Stated that his body is able to stand a billion and thirty-six degrees), Empathic Manipulation and Mind Manipulation (Unaffected by Aya's songs and HAL's Electronic Drug)

Speed: Varies. At least Hypersonic (Outspeeds normal humans like Sasazuka who jumped away from an explosion) to High Hypersonic+ (Encased Tierra's head and neck in metal before an explosion could destroy it) depending on how much demonic power he has | At least High Hypersonic+, likely higher | FTL (Stated that he trained to pass the speed of light from radio exercise in the demon world)

Durability: Varies. At least Town level (His most weakened status from run out of his demonic energy survived from a large explosion), higher by consuming Evil Diversey | At least City level+, likely Mountain level (Claimed that even a nuclear bomb may not have been enought to kill him) | At least Large Island level+, likely Small Country level

Stamina: Very high (Rarely shown to tire during his fights, only needs to sleep when he's low on demonic energy. Remained consciousness after being sliced across the throat, having a sword embedded in his shoulder, being savagely beaten by Sichs, and summoning Evil Metal, then pushed demonic energy into Sichs, despite the pain of his body breaking down, with no visible reaction.)

They are odd items or creatures which Neuro uses for many different situations, ranging from swapping the taste buds on the tongue to making Yako resemble a grotesque monster.

They are much larger and powerful compared to the tools. Neuro's access to the Daemon Emperor's weapons implies that he may have been a demon of high ranking during his time in the Demon World. The tools and the weapons each require a certain amount of demonic energy, so Neuro tries not to use the latter too often as the weapons drain a higher amount of demonic energy compared to the tools.

Intelligence: Genius (Stated that he resolved all of the mysteries in the demon world and left so he could feed on more "puzzles.". After coming to the human world, he mastered knowledge equal to Yako's academic studies in the first twelve hours. He has shown to have the great tactical ability, foresight, and even small detailed knowledge that can be used to create successful plans.)

-Miasma, described as demon oxygen, is extremely rare in the human world, forcing Neuro to convert demonic power to maintain his body . This results in him constantly losing power as combat goes on. If he runs out of energy, his body will begin to break apart.

-Neuro is a notable sadist, frequently subjecting Yako to various tortures and savagely beating his opponents.

-While Neuro is a master manipulator, he doesn't truly understand human emotions, often speaking very bluntly and crudely to others (usually the grieving families of murder victims). While this protects him from Aya Asia's hypnotizing song, it left him unable to solve the password of the HAL program due to it being based on his creator's deceased lover.

-Evil Metal has a sizeable charge time, which can leave Neuro open to attack, and uses up so much demonic energy that it renders him powerless after summoning it.