Note: This profile will be subject to revision in the near future. Until the revision is completed, it is not advised that users create VS threads featuring this character 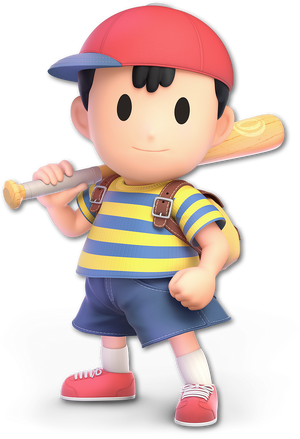 Ness (ネス, Nesu) is the silent main protagonist of Earthbound (Mother 2 in Japan) and is analogous to Ninten and Lucas in their respective games. He greatly enjoys baseball; not only are most of his weapons various types of baseball bats, but he can also equip several baseball caps. In the Earthbound Player's Guide, he is said to wear a special baseball cap with his favorite team's logo on the front.

At the beginning of Earthbound, Ness is awoken from a sound sleep by the impact of the meteorite north of his house in Onett. His mother and sister are agitated, but Ness leaves to find out what happened. After meeting up with Lier X. Agerate and Pokey Minch, he returns home and tries to get back to sleep. Soon thereafter, Pokey arrives and demands that Ness help him look for his little brother, who has gone missing during the calamity surrounding the impact.

After a pep-talk from his mother, Ness, Pokey, and King go back out to the hillside, where they find Picky (who reveals it was Pokey who actually ran away). They also encounter Buzz-Buzz, an insectoid warrior who has returned from the future to warn Ness of the threat that Giygas poses to the universe. It is from Buzz-Buzz that Ness learns of the prophecy surrounding his future; that he, along with the help of two other boys and one girl, will stand against Giygas and save the universe from total annihilation.

Same as before, but more powerful, Acausality (Type 1; Despite Giygas changing the past and fighting him there, he did not suffer any change in the present time), Subjective Reality and Weapon Creation (Can create items such as equipment and weapons and brought them to the real world), Absorption (Absorbed the entirety of Magicant), Can likely damage Abstracts beings (Capable of slightly hurting Giygas before he became more powerful), Resistance to Space-Time Manipulation (Could survive the Creation of Giygas's Dimension, as well as all his changes to the battle area and his attacks), Void Manipulation (Could fight in Giygas's Dimension of darkness, which is able to absorb Paula's call for help), Limited Immortality (Type 6, his spirit will reunite with his original body even after being destroyed, but only one time), Reality Warping, Creation and Matter Manipulation (Created Magicant, which was stated to be an entire universe in the original text), Fusionism, Large Size (Type 8), Cosmic Awareness, Higher-Dimensional Existence, and possibly Non-Corporeal (Touched the Truth of the Universe and became one with the universe), Resistance to Mind Control.

Attack Potency: Small City level+ (On par with the rest of the Chosen Four when they were about to take on enemies like the Ghost of Starman, who are still fought by the end of the game. Can also fight against the Sanctuary Guardians such as Thunder and Storm, who regularly causes storms throughout the battle which requires this much energy), can ignore durability with PK Flash, but it is rare. | Universe level+ (Touched the Truth of the Universe, which was described as being both space and time. Created Magicant, which was stated to be an entire universe in the original text. His psychic consciousness overlapped everything in the universe, which allowed him to fight Giygas)

Speed: Speed of Light (Should be comparable to the rest of the Chosen Four when they were about to take on Pokey Minch) | Omnipresent (His psychic consciousness became one with the universe)

Lifting Strength: Class 5 (Able to lift a submarine alongside Paula and Jeff)

Durability: Small City level+ | Universe level+ (Became one with everything in the universe and shielded the party from Giygas attacks)

Stamina: High (Can fight for long periods of time, can take mortal wounds and still manage to heal himself), higher as a robot.

Range: Extended melee range with his bat. Hundreds of meters with PSI | Universal+

Standard Equipment: Bat, Yo-yo, Slingshot, Baseball cap, Gutsy Bat, Star Pendant (Reduces the damage of Fire and Freeze based attacks by 95%, provides immunity to Flash and Paralysis), Rabbit's Foot (Significantly increases speed and grants immunity to paralysis, but provides no elemental resistances and little defense. Cannot be equipped with the Star Pendant simultaneously), Goddess Band (Provides extra defense and luck while also providing a 2/3 resistance to Hypnosis at the cost of having 1/3 resistance to Brainshock), Souvenir Coin (Provides extra defense and luck), Franklin Badge (Reflects lightning based attacks), Brain Stone (Prevents the holder from losing concentration. Originally belongs to Poo, but it can be given to Ness), ATM Card (His bank reserves can hold up to $9,999,999), various battle items (Bag of Dragonite allows him to transform into a dragon and deal massive fire damage to enemies, Defense Spray slightly increases defense for one battle and can be stacked up to three times, Handbag Strap can solidify enemies, Monkey's Love which is a reusable item that solidifies enemies, Mummy Wrap damages and solidifies enemies, Pharaoh's Curse discharges an ectoplasmic ooze that poisons enemies, Rust Promoter rusts metallic enemies to damage them, Snakes to damage and possibly poison enemies with, Snake Bag gives him access to thousands of snakes to damage and possibly poison enemies with, Stag Beetle can solidify enemies, Sudden Guts Pill doubles his Guts stat for a single battle, Super Bombs, Super Plush Bears that act like temporary party members and can take attacks for Ness, Vipers which damage and always poison enemies, Xterminator Spray which is a reusable item that deals damage to bug enemies), various healing consumables

Intelligence: Gifted (Poo remarks how well he managed to use PSI without any training) | Nigh-Omniscient (Gained the power of the Sea of Eden, which was described as the Supreme Intelligence and Truth of the Universe)

Weaknesses: Pacifist, gets homesick if he hasn't called/visited home recently | None notable

MegaMan.EXE (Mega Man (Franchise) MegaMan.EXE’s profile (Both were at their strongest, Speed was equalized)