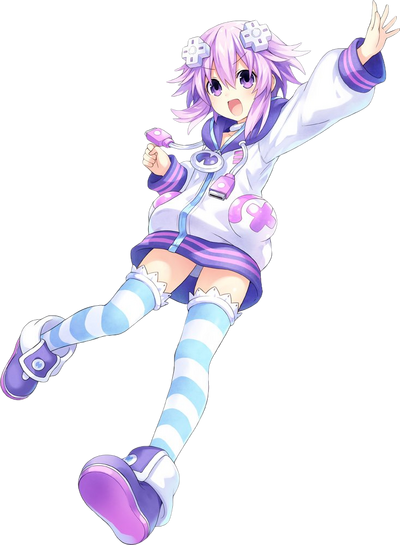 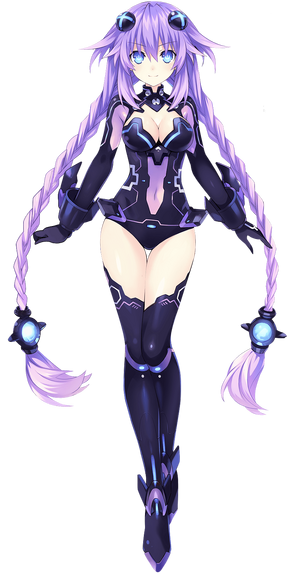 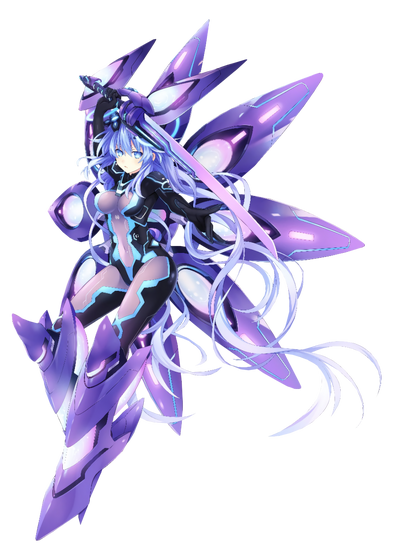 Neptune (aka Purple Heart) is the Goddess/CPU of Planeptune and the Main Protagonist of the Hyperdimension Neptunia franchise.

As one of the four Goddesses of Gamindustri, she has fought the other Goddesses for hundreds of years in the Console wars for control of Gamindustri and title of True Goddess. Eventually the other Goddesses ganged up on her because they believed that Neptune was the biggest threat to them all. After her defeat she is banished from the Goddess's Land, Celestia, and left to fall to the world below. Once she landed, she ended up hitting her head, causing her to lose her memory.

Whilst unconscious Neptune believes herself to be dead, but a voice that called herself Histoire assured her that she was out cold before elaborating to Neptune how Gamindustri in danger.

Upon waking up, Neptune finds herself inside a house where she's being taken care of by Compa, a Nurse in training. The two talk for a while until Neptune remembers what Histoire said in her dream. This caused her to conclude that she is supposed to defeat the final boss and save the world. Though Compa was skeptical at first she agreed with Neptune as people were being threatened, so they soon formed a party and entered a tutorial dungeon to start their journey.

To sum up the rest of the first game without any spoilers, Neptune will have to rally up allies in order to defeat the Evil Goddess, Arfoire.

Neptune is the most carefree of the Goddesses and typical childish airhead. Always jumping head first into any situation without thinking of the possible consequences. This makes people (including her own friends) see her as downright stupid and possibly insane due to her randomness from time to time. She's also a bit of a klutz and very lazy.

Though as the series went on, she learned that it's important to protect everyone and became a little more responsible with her duties as a Goddess (Though she still has a habit of being somewhat rude and lazy from time to time). She also makes plenty of game references and usually breaks the fourth wall. She also likes to play video games.

As Goddess, Neptune can transform into her CPU counterpart: Purple Heart. As Purple Heart, not only is her strength boosted dramatically, but it's like she's a different person. Though she's still a bit of an airhead, it doesn't show as often as she's more serious and less ditzy; making her look more mature and confident in this form. She also seems to have a bit of an ego as before she was banished, she believed the other goddesses couldn't beat her even when working together. Though as stated before, this arrogance led to her downfall. Fortunately, she lessens up the arrogance after she lost.

In Battle, Neptune is a well rounded combatant with a high attack power and balanced defensive stats.

Neptune is also the Personification of the cancelled Sega System known as the Sega Neptune.

Powers and Abilities: Superhuman Physical Characteristics, Weapon Mastery (wields a gun and sword [usually a katana or broadsword]), Adept in martial arts, can transform into her goddess form via Hard Drive Divinity and can take it a step further by transforming into a jet, Summoning (Can summon games to deal elemental damage via R/W Disk or Pre-set Disc), Breaking the Fourth Wall (Constantly remarks about how she's in a game and that she's the heroine and once begs the player to skip a cutscene to spare her from another character's wrath. Can also use her status as main character to avoid potential worst-case scenarios) | Flight in her Goddess Form, Immortality (Types 1), Spatial Manipulation and Conceptual Manipulation as Next Purple.

Attack Potency: At least Town level (Collaborated in making this explosion), possibly Planet level (Comparable to Blanc) | Universe level+ (Comparable to IF, who fought against CFW Magic alongside the others) | Varies depending on the amount of Shares. At least Small City level+ (Equal to the members of Gold Third such as S-Sha), possibly Planet level (Superior to her BoS base form) with low Shares, Universe level+ at average Shares (Far above Histoire), Low Multiverse level at high Shares (Fought and defeated Rei with the help of the other CPUs) | At least Low Multiverse level (Stronger than HDD Rei in her prime, as the NEXT Forms are above any HDD form ever seen)

Speed: At least Supersonic (Can avoid bullets) | At least Hypersonic (Fast enough to dodge a barrage of lasers while in Goddess mode) | Unknown

Durability: At least Town level, possibly Planet level (Comparable to the other CPUs) | Universe level+ (Comparable to the Makers) | Varies depending on the amount of Shares. At least Small City level+, possibly Planet level with low Shares (Superior to her base form), Universe level+ at average Shares (Tanked attacks from the Deity of Sin), Low Multiverse level at high Shares (Took hits from HDD Rei) | At least Low Multiverse level (Superior to her previous form)

Standard Equipment: Default Sword (Usually a Katana or Broadsword but transforms into an Ōdachi when in her Goddess form), Gun (with standard and elemental bullets), Pre-Set Discs and R/W disk

Intelligence: Average but a bit of a ditz

Weaknesses: Neptune doesn't usually think things through sometimes and is quite lazy. Also a bit of a Klutz. As Purple Heart, she's overconfident but this mellowed down after a while. Her Goddess Powers are powered by the Share Energy of her Continent Planeptune (Share Energy is basically the amount of Faith the people put into the Goddess). So if her Share Energy were to be drained then her transformation will be cancelled out. She also hates Eggplants to an astounding decree where one time when she was being attacked by flying eggplants, she immediately stopped her transformation and ran away.

Key: BoS Base | Current Base | Purple Heart | Next Purple