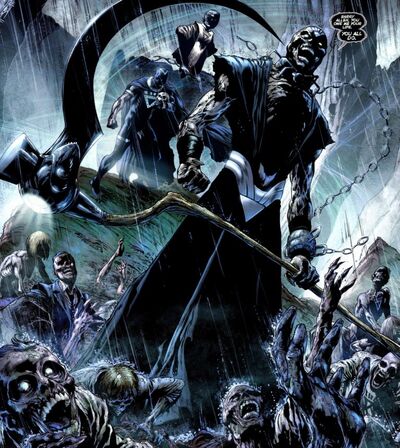 Nekron is the entity of the Black Light of Death. He is trapped in the Land of the Unliving which he lords over. He has made numerous attempts to break free of his realm, often assisted by the Black Lantern Corps.

Gender: Technically none but appears as a male

Classification: Cosmic Being, Guardian of The Darkness, Lord of the Unliving, Embodiment of Death

Durability: Low Multiverse level (Literally laughed off an attack from unrestricted Captain Atom). Extremely difficult to truly destroy, due to its nature.

Weaknesses: He requires a link between the living universe and the Land of the Unliving otherwise he cannot exist in the normal universe.

Notes: According to one writer Nekron is another aspect of Death of the Endless representing "Death as the Ultimate Opponent". However, this appearance was unauthorized by the character's creator, Neil Gaiman, and he strongly disagrees with this interpretation.