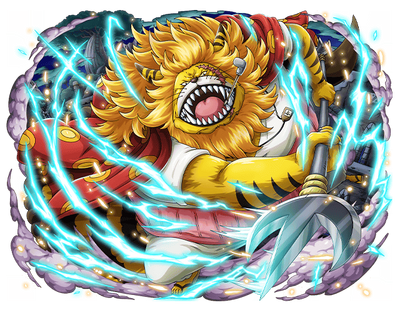 Nekomamushi is one of the two active rulers of Zou alongside Inuarashi.

While he is currently holding a strong grudge against Inuarashi for currently vague reasons, both of them were once partners who rode on Whitebeard and Gol D. Roger's ships as pirates while serving under Momonosuke's father, Kozuki Oden. They did not reach Raftel and instead reside on Zou. Nekomamushi and Inuarashi's grudge means much less to them than serving Momonosuke as shown when they stopped their enraged fighting in order to give news on the well-being of Raizou.

Nekomamushi rules Zou from 6:00PM to 6:00AM in order to prevent himself from having to even see Inuarashi.

After fighting Jack and his crew for 5 days, Nekomamushi was tortured to the point in which he lost one of his arms. He withstood the pain in which he and his country men endured in order to conceal the whereabouts of Raizou, who had been hiding in the country at the time.

Attack Potency: At least Large Mountain level+ (Held Jack off in combat for 12 hour intervals while also being able to rag doll his mammoth form on one occasion. Was considered to be a monster even by Capone Bege to fight with his own powers)

Lifting Strength: Class G (Rag dolled Jack in his Mammoth state, slamming him into a building, crumbling the structure)

Durability: At least Large Mountain level+ (Blocked and traded blows with Jack for half a day)

Stamina: Very High (Could hold a physically demanding brawl against an opponent for 12 hour intervals without showing fatigue)

Range: Extended melee range due to size, a few meters with his weapon

Standard Equipment: His teeth, claws, and a bladed staff

Intelligence: High (While he holds a strong grudge against Inuarashi, Nekomamushi is capable of ruling Zou, and his will power allowed him to withstand intense levels of torture that led to him losing an arm without revealing information about Raizou, who he was concealing the presence of at the time)

Retrieved from "https://vsbattles.fandom.com/wiki/Nekomamushi?oldid=5799469"
Community content is available under CC-BY-SA unless otherwise noted.