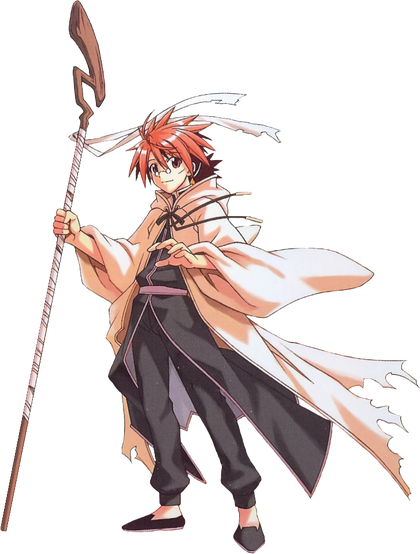 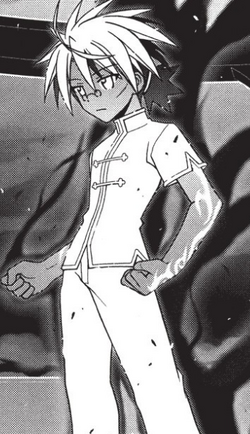 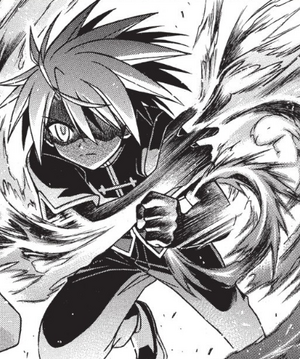 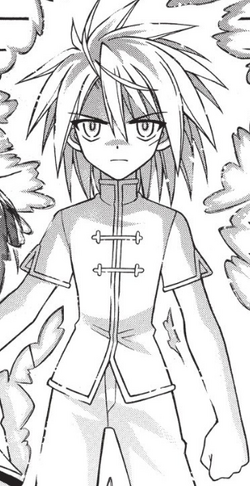 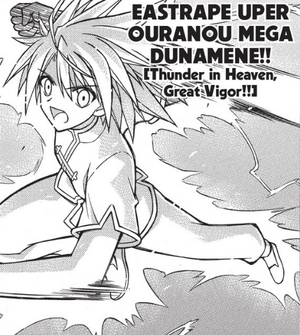 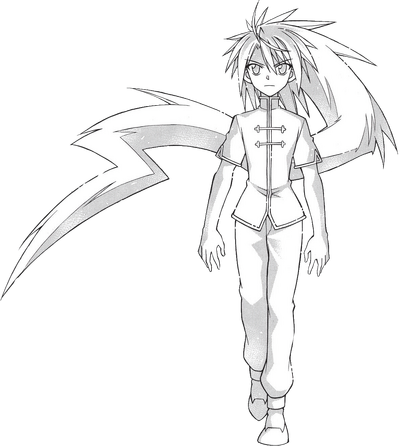 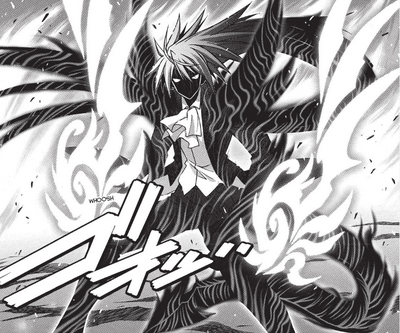 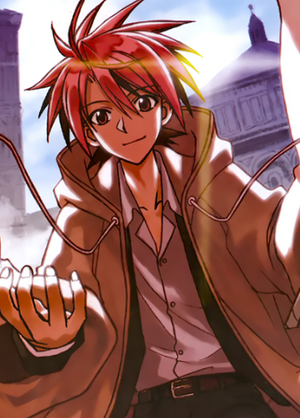 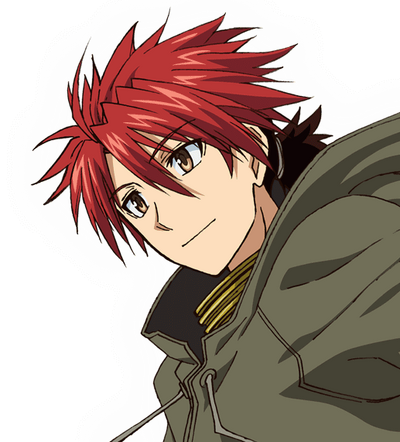 Negi Springfield is an aspiring Magister Magi and the ten-year-old English teacher at the all-girls Mahora Academy. Excessively humble and polite, his demure exterior hides his incredible magical potential, which gets into more than his fair share of awkward situations. But his family history ties him to a much larger plot, one that can decide the fate of both the mundane and magical worlds.

Powers and Abilities: Superhuman Physical Characteristics, Enhanced Senses (Able to notice ordinarily invisible ghosts that even shamans and exorcists couldn't see), Decent Marksman, Extrasensory Perception (Able to sense both chi and magic), Accelerated Development (Develops his magic and martial arts skills remarkably quickly during training), Magic, Magic Barrier Creation, Fire Manipulation, Lightning Manipulation, Air Manipulation, Light Manipulation, Homing Attack, Danmaku and Paralysis (Via Sagitta Magica), Love Inducement (Via Love Potions), Dream Manipulation (Able to views others dreams), Memory Manipulation, Sleep Inducement, Healing, Power Nullification (via Dispulsatio), Telekinesis (Able to manipulate small objects), Illusion Creation, Sealing (via Lagena Signatoria, and can also seal one’s magic power via Fila Nigra Promissiva), Clairvoyance (Able to find the location of his lost wand by closing his eyes), Limited Telepathy (Can communicate telepathically to anyone he has a Pactio with), Summoning (Can summon anyone he has a Pactio with, and summon elemental spirits), Statistics Amplification (By casting the Master-Partner magic sharing spell coming from the Pactio contract on himself, Negi can increase his strength, speed and durability), Flight (Via staff), Soul Manipulation (Via Manus Jaldea), Resistance to Magic (Has a passive resistance which allowed him to greatly slow down potent petrification while being hurt, extremely exhausted and having run out of magic power)

Powers and Abilities: All previous abilities plus True Flight, Weather Manipulation (Can manipulate the weather), Limited Counterspelling (Capable of breaking curses with preparation time, not combat applicable), Resistance to Empathic Manipulation (Resisted feeling the negative emotions of all humanity for 20 years) and Poison Manipulation (Could fight against Nagi-Ialda while poisoned by Ialda’s army of toxic vengeful ghosts).

Powers and Abilities: All previous abilities. Possesses all of Ialda's abilities which include: Immortality (Type 1, 2, 3 and 6), Resurrection, Teleportation, Transmutation (Turned a little girl into a vampire), Energy Projection, Regeneration Negation and Magic Barrier Negation (Can fire darts that bypass magical barriers and reduce anyone they touch into dust, no matter how powerful their regeneration is, up to at least Mid-High), Soul Manipulation (Manus Jaldae is a spell she created), Possession (If she is killed, she possesses the one who killed her), Mind Control, Perception Manipulation, Necromancy (Her powers are said to be leagues over that of the exceptionally powerful necromancer Sayoko Minase), Empowerment (Ialda feels and is fueled by the feelings of everyone in the present and past, most significantly the feelings of pain and suffering. Additionally, her power is proportional to the amount of suffering and resentment in the world), Empathic Manipulation (She uses the feelings that empower her to break down the will of her host, allowing her to possess them fully), Pocket Reality Manipulation (Ialda can create imaginary worlds outside reality called Phantasmagoria, in which she controls everything, which she can shape and influence how she pleases, even rewriting the laws of reality. It has been described as akin to her "womb" or her "dreams"), Creation (Ialda is the creator of the Magical World and all of its native inhabitants. She also created powerful construct-mages, whom she can resurrect or summon by her side), Reality Warping (Created the Magical World, an alternate plane of reality on Mars made completely of magic. Ialda can erase everything made out of magic. It also applies to the Magical World, its fauna and flora and even its inhabitants), BFR and Limited Space-Time Manipulation (Can send peoples to the ultimate Phantasmagoria that she created: the Cosmo Entelecheia (or Eternal Garden), a world outside of time and space in which everyone lives the happiest, most perfect possible scenario of their life, based on their past and unfulfilled desires, for eternity), Power Bestowal (Can give her Reality Warping powers to others via the Code of the Lifemaker), Darkness Manipulation, Poison Manipulation, Paralysis Inducement, Aura (with Fear inducement), Shapeshifting (Can take the appearance of her previous hosts and apostles), Corruption (Has an unnamed spell that binds the target and eats away at their soul before fusing with them, turning them into Ialda's puppet), Resistance to Time Stop (Unaffected by Koyomi's Time-stopping Artifact), Petrification and Ice Magic (Unaffected by Fate's petrification spell or Evangeline's Eternal Freeze), Soul Manipulation (survived Negi's Manus Jaldae which is said to be a spell that destroys the soul of the target)

Attack Potency: Building level (Managed to defeat Herrman) | City Block level (Matched Chao's strongest spell, although his spell was a bit weaker than hers) | Large Town level (Managed to vaporize a huge part of a 100-meters-tall floating rock), Large Town level+ with Actus Noctis Erebeae (Said to be 1.5 times stronger than in base). Small City level with Agilitas Fulminis and Sim Fabricatus Ab Incendio (Said to be two times stronger than with Actus Noctis Erebeae). Large Mountain level with Raiten Taisō (Comparable, albeit weaker than Jack Rakan, who can casually do this), higher with Enroachment of Erebea (Stronger than before, effortlessly overpowered Dynamis, who could match Raiten Taisō 2 Negi in battle) | At least Large Mountain level (Can hurt Fate in base, who is comparable, albeit weaker than Jack Rakan), likely Island level with Magia Erebea (Stronger than Fate, and stated to be equal to Jack Rakan) | At least Island level (Stronger than before), higher with Magia Erebea (Matched Nagi-Ialda in battle. Destroyed an asteroid together with Asuna) | At least Island level, likely higher (Stronger and more experienced than his younger self), and even higher with Magia Erebea (Countless souls of the dead further enhances his striking strength and magical power). Possibly Small Planet level with preparation (Created another world 1/3rd the size of Earth, even though it's unclear if it was done in one go)

Stamina: Very high. He fought a copy of Eva for ten days in the Phantasmagoria realm, died 70 times in that realm, and was still able to keep fighting over and over again. Able to keep up Magia Erebea for extended battles and pull out multiple high-level spells one after another | Extremely high. Negi invented a magic circle to keep absorbing magical power from the environment, and his opponent's residual magic for virtually limitless magical energy limited only by his endurance and the opponent's magical power. | Virtually limitless. Countless souls of the dead give him a virtually unlimited supply of magic power. His mental fortitude is so great that he was able to endure experiencing all of the pain and negative emotions of humanity for over twenty years before breaking.

Intelligence: Extraordinary Genius. Became a middle school teacher at nine years old, learned Ku Fei's Chinese Kung Fu in a few hours when it normally takes people at least three months, capable of mastering many techniques and magic abilities much faster than normal and creating his high powered magical techniques. He also figured out how to use Chao's Cassiopeia device in an efficient way using magic when Chao (who is a super genius and the most intelligent student in Mahora) needed a high-tech battle-suit to control it and took her two years to master it. Negi also has good leadership skills, being in charge of Ala Alba and serving as a teacher to many students.

Weaknesses: When using the Enroachment of Erebea, Negi is overwhelmed by negative emotions and will attack anyone who crosses his path. Overusing this mode will ultimately cause the death of the user. However, this is no longer the case post-death/rebirth.

Magia Erebea (闇の魔法 (マギア・エレベア), lit. Dark Magic) is a forbidden technique created by Evangeline A.K. McDowell over ten years, in which the user absorbs offensive magic designed to harm the enemy into his own body, to the point where it fuses with their very soul. Any select properties of the spell that is absorbed will also transfer to the user. The technique feeds on the user's body and soul, but in return, the user gains power many times that of any ordinary person.

One of the two styles of Chinese Martial Arts that Negi learned from Ku Fei, Hakkyokuken (八極拳) is an external/hardstyle that emphasizes pure, direct, explosive strength at close range. Together with Hakkeshō, it allows Negi to have a great balance in his fighting.

One of the two styles of Chinese Martial Arts that Negi learned from Ku Fei, Hakkeshō (八卦掌) is an internal/soft style which specialises in free-flowing stances designed to maneuver around an opponent, and using full rotations of the body to deflect an opponent’s attack, using the same motion to increase the power of a counter strike. Together with Hakkyokuken, it allows Negi to have a great balance in his fighting.

After making a temporary pactio with the Third Princess of the Hellas Empire, Negi gained access to a pocketbook shaped artifact that allows him to summon the artifacts of other people he has made pactios with. The Artifacts he has access to are:

Note: The "at least" rating for the asteroid feat comes from using the gravitational binding energy rather than the kinetic energy, with the latter likely producing higher results.