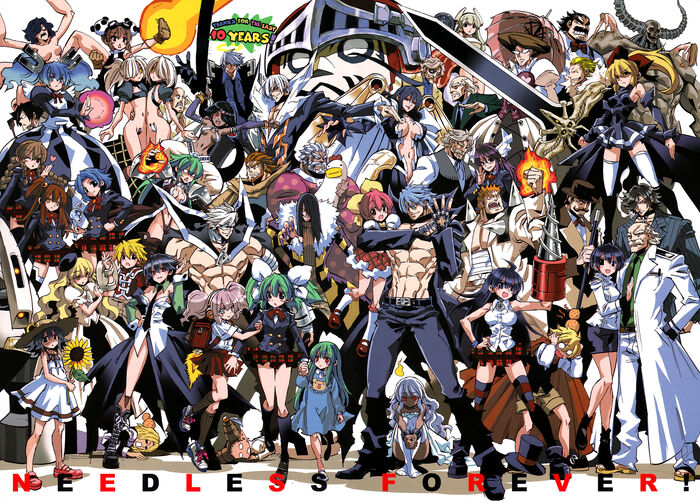 In the year 2130, half a century after the World War III, Japan is extremely damaged all over, surrounded by several craters known it as Black Spots. From all this chaos, a new specie of humankind rise from the Black Spot, with the name of Needlessness; this new humankind possesses incredible powers called fragments, the fragments of the Second Christ's powers.

The story star with Cruz, a member of the Rebellion that fight against Simeon Phasmaceutical, an organizations led by Arclight whose main target is consume any Needless that cross with him and become God. After Cruz being saved by Blade, the clon of the Second along with Arclight, Blade and his team start a crusade in order to Stop Arclight and his Elite Four, stopping him to become Almighty and "re-create" the World. Take a look at the next blog to undestand about the scaling and feats of the serie.

Verse show a consistence amount of characters capable to destroy tank-like machines to small buildings for the weakest, with the stronger being capable to casually destroy skyscrapers. Some Fragments increase the Destruction Capacity of the users, making them capable to destroy towns and create huge craters. Meanwhile, the God Tiers of the verse are capable to survive a nuke, a nuke capable to destroy a mountain; additionally, Almighty Blade is capable to re-create the entire planet with only wishing it, although, that is via Reality Warping.

Furthermore, the verse count with several ways of hax and durability negation, including: Molecule Manipulation, Soul Absorption, Mind Control, Stats Changes, etc. The powers and its functioning are explained in the next blog.