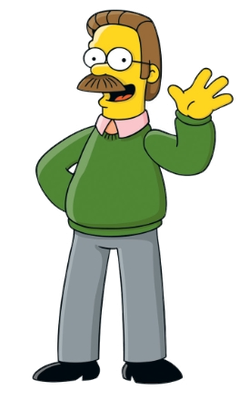 Ned Flanders is a supporting character in the animated series, The Simpsons. He is the extremely religious next-door neighbor of the Simpson family. He is the well-mannered widower of Maude and father of Rod and Todd. He immensely worships God and is a strict follower of the Bible.

Age: Unknown (A flashback in Hurricane Neddy that took place 30 years before showed him as a child, but in Viva Ned Flanders, he claimed to be 60)

Speed: Supersonic (Can keep up with Homer, Blocked a bullet), Massively Hypersonic+ attack speed via Summoning (God instantly created cloud-to-ground lighting in order to save Todd)

Durability: At least Building level+ (Can take hits from Homer)

Intelligence: Above Average (Has extensive knowledge of the Bible, Has a degree, though the field is unknown, and has worked as an entrepreneur, as he owned The Leftroium and Flancrest Enterprises. Also worked as a bounty hunter, a salesman in the pharmaceutical industry, and a temporary principal for Springfield Elementary School, although he was very hesitant to discipline the students)