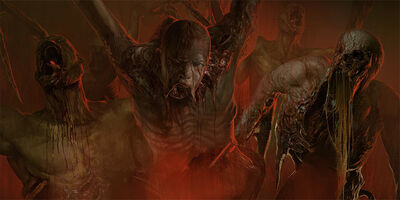 Necromorphs are mutated reanimated corpses, reshaped into horrific forms by a recombinant extraterrestrial infection. The resulting creatures are extremely aggressive, and will attack any uninfected organism on sight.

The sole purpose of almost all Necromorphs is to acquire more bodies to convert and spread the infection. They are believed by some to be the herald's of humanity's ascension, but on a more practical level are the extremely dangerous result of exposure to the enigmatic devices known as Markers.

The Necromorphs are controlled via the Markers by a group of entities known as Brethren Moons, massive moon sized Necromorphs created by killing and infecting every living thing on a planet. The Necromorphs' true motivations are to create a mass of necrotic flesh to be collected by the markers during Convergence, with the intent to create another Brethren Moon.

Population: At least in the millions

Powers and Abilities: Superhuman strength and Durability, Unlimited Stamina, able to communicate with each other, very sharp claws