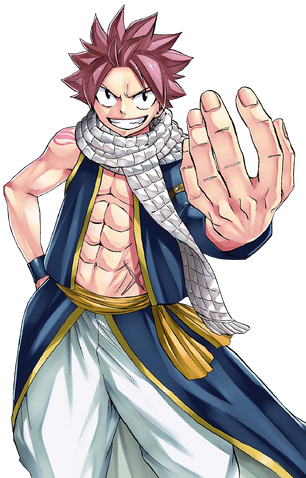 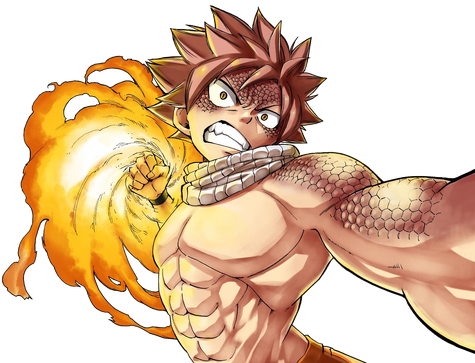 Natsu Dragneel is a Mage of the Fairy Tail Guild and a Fire Dragon Slayer. After the ending of the original series, he accepted a hundred-year quest along with his team to defeat the Five God Dragons on Giltena.

Age: 19 (He was originally born over 400 years ago as the younger brother of Zeref)

Superhuman Physical Characteristics, Enhanced Smell and Hearing, Extrasensory Perception, Expert Hand-to-Hand Combatant, Magic, Fire Manipulation (Natsu is able to generate and manipulate fire), Heat Manipulation (He can increase or decrease the temperature of his magic. In X792, his fire can vaporize sand, which makes it comparable in temperature to lightning. His FDKM's is far hotter than his normal flames) Absorption (Can absorb virtually any kind of fire, as well as other kinds of magic), Rage Power (The temperature and volume of his flames are affected by how emotionally charged he is), Limited Flight (via propulsion), Limited Durability Negation against Dragons (His Magic is especially effective against those with dragon-like properties, bypassing their defenses), Limited Power Mimicry (Can replicate the properties of other flames after consuming them), Transformation (Can enter Lightning Flame Dragon Mode and Dragon Force), Lightning Manipulation (Via Lightning Flame Dragon Slayer Mode), Power Nullification (Burned away Zero's Existence Erasure magic, Sting's stigma, as well as Zeref's Death Magic and Time Magic, burned Mercphobia's magic to such an extent that it left him unable to transform into a Dragon), Regeneration Negation (Nullifies up to Mid-Low regeneration. Natsu stopped Zeref's regeneration from healing severe burns and deep injuries), Instinctive Reaction (Via turning off his own mind), Limited Space-Time Manipulation (Broke out of Macbeth's Genesis Zero spell, which sends the opponent to a different dimension), Soul Manipulation (Damaged Zeref's as well as his own Soul), Astral Projection (He can willingly have his soul leave or enter his body, however he has far from mastered this skill and doesn't know fully how to do it), Resistance to Fire Manipulation (Natsu is almost completely unharmed by any form of fire and most displays of magical fire), Limited Resistance to Cold Temperatures (Natsu has demonstrated indifference to naturally cold temperatures and has a measure of resistance against ice and cold-based attacks), Soul Absorption (Resisted Franmalth absorbing of his soul), Lightning Manipulation (Via Lightning Flame Dragon Slayer Mode), Existence Erasure (Withstood Macbeth's Genesis Zero spell for a prolonged period of time), Death Manipulation (Resisted Zeref's Death Magic), Ice Manipulation (When Invel froze Natsu with Ice Magic, he was able to thaw himself after a significant period of time), Time Stop (Was completely unaffected by Dimaria's Âge Seal), and Soul Manipulation (Completely ignored Wraith trying to control his soul)

Same as before, Better Soul Manipulation (He can freely control his Soul), Non-Corporeal (As a Soul, no physical being can touch him), Non-Physical Interaction (As a Soul, he can hit ghosts and other Souls. He can also hit physical beings as well), Invisibility (As a Soul, nobody except other Souls can see him), Durability Negation (Can hit the Soul of someone while simultaneously hurting their Physical Body)

Durability: Island level (Took hits from Madmole and Kiria), higher with LFDM (More durable than his Base Form) or FDKM (At least twice as strong as before due to Fire Dragon King Mode) | Small Country level, likely Continent level (Took attacks from Mercphobia with little to no injury)

Stamina: Extremely large (Has been shown to fight multiple opponents without resting and continue fighting despite taking severe and life-threatening injuries. Used several consecutive spells against Gildarts and even after being hit by his disassembly magic, he managed to use his secret art without showing any signs of exhaustion. He battled Cobra for an extended time while being affected by his poison. Used a hidden skill in his Lightning Flame Dragon Mode against Hades even after using nearly all his magic and being nearly immobile. Battled Acnologia alongside his guild with little time to rest and without fully healing his injuries from his previous fight. He battled Jackal even after being hits by multiple of his explosions. Fought through the second day of the war against the Alvarez Empire, including opponents the likes of the remaining members of the Spriggan 12, Zeref and Acnologia [with only one rest due to being in a coma from nearly becoming a demon] and still had little strength left despite using advanced-level spells and suffering severe wounds). Can eat fire to restore his magic power and stamina.

Range: Standard melee range in melee combat. Several hundreds of meters to several kilometers with ranged attacks and senses (His Lightning Flame Dragon's Roar reached across Tenrou Island. After the second time-skip, a casual fire attack could hit someone from across the horizon, and his Blaze Dragon King's Demolition Fist cut a swathe across Lake Scilliora, which evaporated from the sheer heat of Natsu's attack)

Intelligence: Natsu is a bull-headed, hot-blooded, and reckless youth with a short attention span and poor common sense. He is often regarded as an idiot by those close to him and rarely ponders over the little details before charging into a fight. Nevertheless, he is an incredibly skilled hand-to-hand combatant who can easily take on entire cohorts of armed soldiers with ease and minimal use of his Magic, being recognized as one of the guild's best brawlers and was a candidate to become an S-Rank Mage. He was able to read and memorize the fine details of Sting's fighting style after clashing with him for a few minutes at best. He has shown himself to be an excellent leader, spearheading improvised tactics against powerful foes like Dorma Anim and leading the assault on the Spriggan fleet alongside his fellow Dragon Slayers.

Weaknesses: Natsu gets exposed to motion-sickness as a consequence of his Dragon Slayer Magic and even thinking about transportation can make him unwell. Eating kinds of magic that isn't fire can temporarily give him a power boost but will make him sick in the long-run. He is quite reckless, not so bright outside of combat. Using his most powerful attacks leave him drained. Damaging the Book of E.N.D. causes damage to him. As a member of Fairy Tail, the destruction of the holy tree of Sirius Island will weaken him. Fire Magic is inherently weak against Water Magic.

Fire Dragon Slayer Magic (火の滅竜魔法 Ka no Metsuryū Mahō): Natsu is adept with his Dragon Slayer Magic and makes use of it in many different ways in combat. As with all Dragon Slayers, he can consume his particular element, except that which he has created, to replenish his energy reserves, and deal more damage to Dragons. The heat of his fire can increase in temperature, which is proportional to Natsu's emotional state. Natsu subconsciously used this against Erigor; his flame's heat significantly rose as he got more enraged; this is also called the Flame of Emotion. He incorporates the flames he ignites into his fighting style, greatly increasing the damage of his blows. As such, Natsu's Magic revolves around the usage of fire that can spout from any part of his body. Natsu's ability to eat flames gives him immunity to most types of flames and allows him to spew fire from his lungs. This fire is exceptionally fiery and is thought to be equivalent to that of a real dragon, being able to cleanly through metal and vaporize sand on contact He can even use his flames to create a propulsive effect The type of fire he uses can be changed. For example, can create it can be solidified to cling to surfaces. Also, the sudden change in temperature caused by his rapid bursts of flame affects nearby air currents can manipulate air currents to an extent.

Fire Dragon King Mode (モード炎竜王 Mōdo Enryūō): After training for a year, Natsu can boost himself with the power of a Fire Dragon King. As a result of the sheer potency of the ability itself, before even properly utilizing the power to its fullest, the user radiates incredible heat. When the mode is activated, in a radius expanding meters, the ground itself becomes lit in a circular crimson inferno; bodies of water near the user, like a lake, quickly evaporates away, leaving nothing behind; and the clothes of anyone nearby burn off from the heat. The user's power increases to the point that they can take down a member of the Spriggan 12 with one attack. 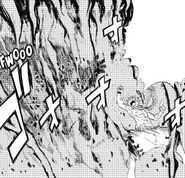 Ignia's Power: After consuming all of Ignia's fire, Natsu can enter a Fire God Dragon Force that has immense power and can allow him to overpower Mercphobia. In this form, Natsu's arms and face are covered in scales, and his hands are covered in black markings that reach up to his wrists. As well, Natsu's fire takes on a darker color and becomes far more destructive. Natsu also gains a huge boost of strength in this form, allowing him to effortlessly swing Mercphobia around and then slam him into the ground. This form also makes Natsu slowly become more bloodthirsty and ferocious, as after already defeating Mercphobia, he wanted to obliterate his body and burn everything to ash. This form can also damage Natsu's body as after it was deactivated, and his arms were revealed to be burned severely.

Thought Projection Magic: Natsu can freely have his Soul leave or enter his own body, and when he does this he can freely manipulate the shape and form of his Soul. As a Soul, Natsu can also hurt both Ghosts/Souls and Physical Beings. When he is a Soul he is invisible and intangible only being able to be hurt by other Souls. Natsu has far from mastered this magic, and forgets exactly how to do this magic.