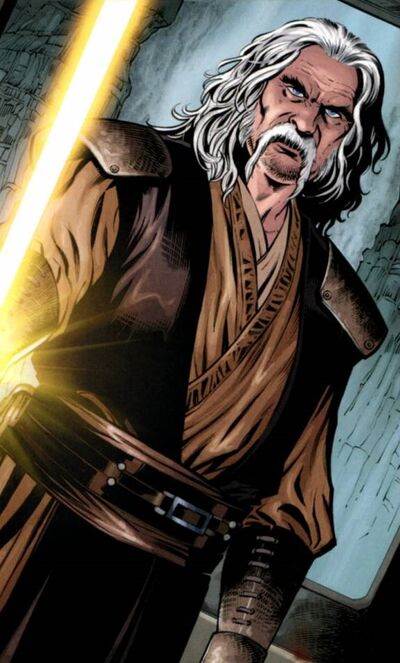 Nat Skywalker is a Human male who served as a Jedi Master during the Sith–Imperial War. Born into a strong Force-sensitive family, Skywalker was a descendant of Anakin and Luke Skywalker, the older brother of Jedi Council member Kol Skywalker, and uncle of Kol's son, Cade. During his time as a Jedi, Skywalker married the Kiffar Droo and adopted her daughter Ahnah; he also adopted a young boy named Skeeto. When the Sith–Imperial War began, Skywalker helped the Jedi Order find a suitable planet, Taivas, to build a Hidden Temple. After leaving the Order, Skywalker adopted the alias "Bantha" Rawk, with his family taking the surname as well.

Intelligence: Gifted (Rawk is highly skilled in combat, having trained as a Jedi and risen to the rank of Jedi Master, and retaining his skill even after years of not using the Force, managing to outmatch Imperial Knights like Azlyn Rae despite the fact that he was unarmed while Rae had her lightsaber to his chest. Rawk is also a gifted mechanic, having developed and built a pair of bionic legs for his adopted son, Cade's ship the Mynock as well as his custom blaster, and even a highly advanced life-preserving suit similar in make to that which was used by Darth Vader.)

Retrieved from "https://vsbattles.fandom.com/wiki/Nat_Skywalker?oldid=4623811"
Community content is available under CC-BY-SA unless otherwise noted.