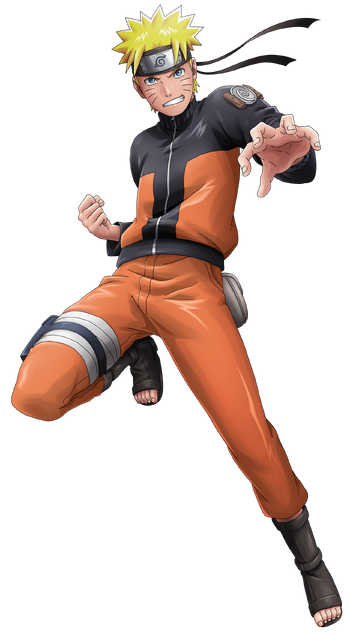 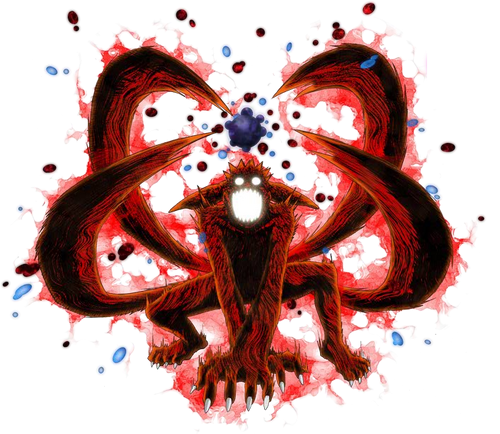 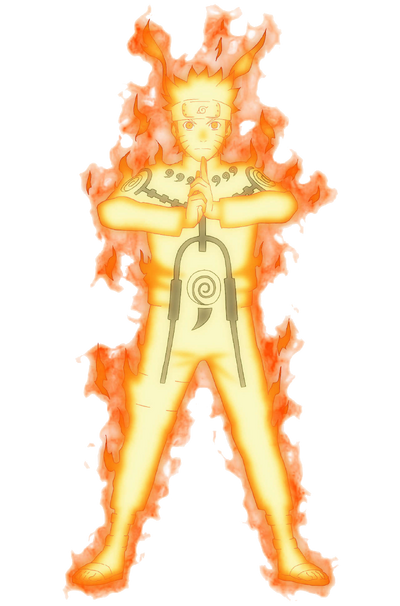 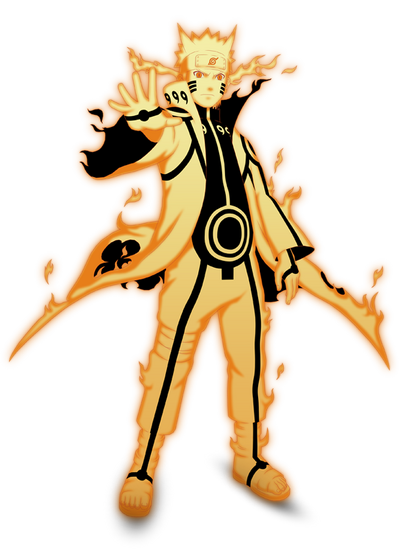 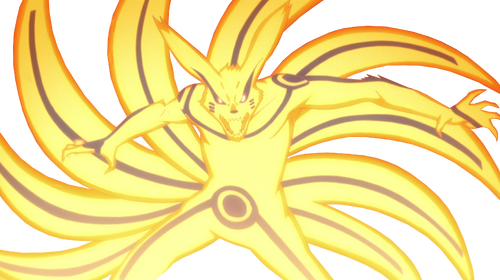 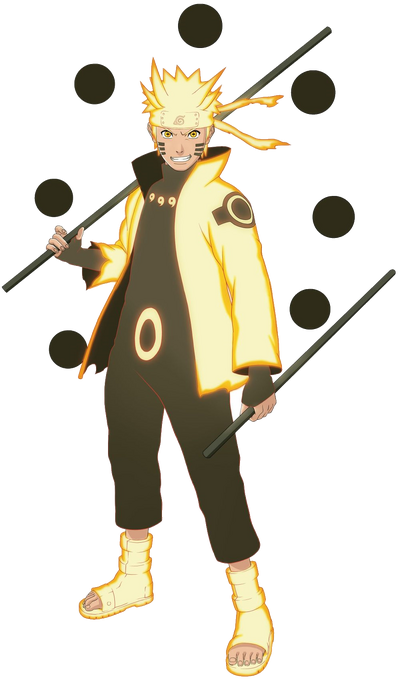 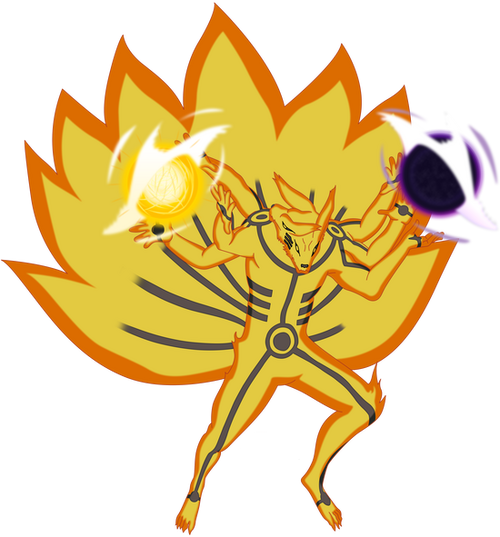 Naruto Uzumaki is the eponymous protagonist of Naruto. The son of the Fourth Hokage and Kushina Uzumaki, he was made the jinchūriki of the Nine-Tailed Demon Fox, Kurama after a mysterious masked man attacked the village on the day of Naruto's birth. Orphaned at an early age, he was given his mother's surname to protect him from the prying eyes of the other villages. But this meant that Naruto was banished for his status as the Nine-Tailed Fox's vessel throughout all of his childhood, leaving him starved of the attention and affection he desired. With the encouragement of the Third Hokage and a fateful event at the Ninja Academy, Naruto resolved to become Hokage himself to win the admiration of the Hidden Leaf Village and find his place in the world, becoming a pivotal character in the Ninja World's history.

Superhuman Physical Characteristics, Acrobatics, Chakra Manipulation, Surface Scaling, Water Walking, Skilled Hand-to-Hand Combatant, Weapon Mastery, Social Influencing, Energy Projection, Stealth Mastery, Accelerated Development, Multiple Personalities (As a Jinchūriki), Aura, Explosion Manipulation with explosive tags, Rage Power, Berserk Mode, Body Control (with Kurama's chakra he can create chakra arms to attack targets from a distance and grant him better mobility and maneuverability), Corrosion Inducement and Vibration Manipulation with Kurama's chakra, Regeneration (Low normally, Low-Mid with Kurama's chakra; regenerated in an instant after Sasuke pierced through his chest and right lung), Immortality (Type 3), Statistics Amplification (Can enhance his speed and physical capabilities with chakra, and can further increase his statistics with Kurama's chakra), Longevity (As a descendant of the Uzumaki clan, he possesses an extraordinary life-force, granting him a longer lifespan than others), Wind Manipulation (Rasenshuriken also damages targets on a cellular level), Telepathy (Can read the minds of targets by making contact with them and connecting his chakra to them), Limited Durability Negation (Rasenshuriken does damage by specifically attacking and damaging the cells of his targets), Limited Power Nullification (His Rasenshuriken is capable of destroying the chakra circulation paths that allow users to use their chakra), Shapeshifting (Can transform into living beings and inanimate objects, and can use this in battle to confuse his opponents and catch them off-guard in a variety of ways), Duplication (Can create solid "shadow clones" that are identical to him and can use his abilities as well as relay any information they gained back to the original upon being dispersed), Summoning (Can summon toads of varying sizes, some of which can crush and flatten targets from above, spew oil from their mouths to restrict the movements of targets, skillfully wield weapons, manipulate water, and utilize illusions, among other things), Can replace himself with inanimate objects in the vicinity to avoid damage, Can attack targets that enter his mind, his chakra can act as a forcefield around him, likely Paralysis Inducement (via paralysis jutsu), Resistance to Sleep Inducement (Resisted Itachi's attempt to put him to sleep), Illusion Creation and Mind Manipulation as a perfect jinchūriki, Acupuncture, Power Nullification (Naruto can utilize Kurama's chakra to open up his chakra points if they are closed), Sealing (Destroyed the First Hokages necklace specifically created to seal the Nine-Tailed Fox), Possession (Suppressed Kurama's attempt to take over his body), Fusionism (Kurama rejected Pa's attempt to fuse with Naruto)

All previous abilities in base, Enhanced Senses, Empowerment, Absorption (Can absorb natural energy from his surroundings), Extrasensory Perception (Can sense attacks without directly seeing them, allowing him to dodge appropriately and can detect targets over great distances), Mind Manipulation and Mind based BFR and non-combat applicable Spatial Manipulation (with Ma and Pa), Limited Durability Negation (Can ignore the outer defense of targets and accurately perform internal damage by sending chakra waves into them with Frog Strike), Limited Petrification and Transmutation (Opponents who absorb excess amounts of natural energy from him without the ability to properly balance it will subsequently be turned to stone and into a frog), Clairvoyance (Sensed and gained information about the events of the Fourth Shinobi World War from an island that isolates foreign chakra), Resistance to Paralysis Inducement (Resisted the effects of Nagato's black receivers, which paralyse and restricts the movements of targets, and also controls their actions, despite being in close proximity with him)

All previous abilities in base, Emotion Detection (Can sense hatred and other forms of negative intents and emotions), Analytical Prediction (He can predict the next move of his opponent by sensing their negative emotions), Limited Regeneration Negation (Up to Low-Godly; Kabuto stated that it would take time for Muu to regenerate from Naruto's attack due to the new power he acquired), Plant Manipulation (Naruto's chakra can affect white Zetsu by turning them into trees when hit by a Rasengan), Resistance to Soul Manipulation, (Resisted Nagato's attempt to extract his soul, although he was saved by Itachi soon after)

All previous abilities in base enhanced, Large Size with Bijuu Mode (Varies from Type 2 to Type 3, as the size of the Bijuu was portrayed inconsistently), Power Bestowal (Gave the Alliance Shinobi Force Kurama (Kyūbi)'s chakra), Advance Energy Manipulation (Naruto can change the nature of Kurama's chakra to match thousands of shinobi in the alliance)

Attack Potency: At least Town level, far higher with Tailed Beast Transformations (His Rasengan clashed equally with Sasuke's Chidori, with both of them admitting to each other that they were evenly matched. Can further increase his strength with Kurama's chakra) | Mountain level+ (Stronger than Jiraiya, as he attained a perfect Sage Mode, and Pain also commented that nobody else he'd faced had given him such trouble) | At least Mountain level+ (Stronger than his Sage Mode, and should be stronger than his four tailed form, as he attained a vast majority of Kurama's chakra, leaving him in an emaciated condition) | At least Large Island level, up to Small Country level (Matched the combined Bijūdama of five other Bijuu’s with one of his own without being at full power, and contributed to the majority of the energy used to perform this feat) | Multi-Continent level (Tore off Obito's chakra arms alongside Minato Namikaze and fought him head-on) | Moon level+ (Received half of Hagoromo Ōtsutsuki's power alongside Sasuke. Momentarily matched Kaguya's Gentle Fist with his chakra arms and sliced her arm off with a chakra claw. His Rasenshuriken was able to completely obliterate Madara's Chibaku Tensei, creating immense blasts), far higher with Asura Avatar

Speed: Massively Hypersonic+ (Far superior to his previous form, he can also keep up with Kakashi), far higher with Tailed Beast Transformations | At least Massively Hypersonic+ (Can fight against Deva Path and occasionally overwhelm him, far superior to his base form), likely higher | At least Sub-Relativistic (Able to blitz Kisame. Kept up with Obito Uchiha and his Six Paths Jinchūrikis. Managed to dodge Lightning Armor A's fastest punch and fight equally with Kakashi and 6th Gates Guy) | Relativistic (Much faster than his KCM state. Was able to block several Bijuudamas simultaneously. Was able to fight against Edo Tensei Madara and his Wood Dragon) | At ​​least Relativistic (Managed to keep up with Six Paths Sage Obito) | FTL (Superior to his previous form and should be as fast as his SPSM state in the New Era)

Durability: At least Town level, far higher with Tailed Beast Transformations (Took a blast of Shinra Tensei from a weakened Deva Path. Survived the clash between his Rasengan and Sasuke's Chidori, and also took his Chidori Nagashi) | Mountain level+ (Can fight equally against the Six Paths of Pain) | At least Mountain level+ (Tanked Obito and Madara's Katon, and was undamaged by Nagato's Shinra Tensei. Took the full brunt of a portion of the Juubi's Tenpenchii alone) | Country level (Tanked an attack from the Juubi, despite running low on chakra) | Multi-Continent level (Withstood a slam from Obito's chakra arms) | Moon level+ (Tanked Sasuke's Chidori, and flew through Kaguya's Eighty Gods Vacuum Attack and was unharmed), far higher with Asura Avatar

Stamina: Very high, as he has vast reserves of chakra. Fought for several days in the Fourth Shinobi World War, despite sharing his energy between several thousands of shinobi and taking attacks for them

Range: Several dozen meters, hundreds of meters with chakra roars, over a kilometer with chakra blasts in Jinchuriki Forms, tens of kilometers with Rasenshuriken and Bijuudama, countrywide with clones and SM chakra sensing. Thousands of kilometers and cross-dimensional sensing in Six Paths Sage Mode

Intelligence: Combat Genius. Acts headstrong and often acts without thinking. However, Naruto's years as a prankster gave him a cunning imagination that is useful in battle. He is a remarkable tactile learner, able to learn better through executing a task rather than theorising about it. Once they see him in action, even the likes of the Second Hokage revised their thoughts about his intellect. Naruto can formulate multi-step plans and even backups to those plans in the thick of battle. Naruto's strategies typically involve shadow clones: he may direct his opponent's attention towards one of his clones to disguise his movements; he may transform them into objects or other individuals for surprise attacks; he may make himself seem predictable by creating a pattern, to throw them off by breaking it. He is rather observant, able to notice details others may overlook and subsequently take advantage of it. Even when given new information, he can act quickly. When not in combat, he is generally average in intellect but can be quite stupid sometimes. This is usually used as a comedic effect, making Naruto the butt of many jokes inside and outside the show

Weaknesses: Using the incomplete Rasenshuriken damages him, Sage Mode has an energy limit (using Rasenshuriken too many times causes him to revert to his Base Form), can be an utter and complete idiot at times. Version 2 leaves him in a frenzied state where he cannot reason and differentiate friend from foe. His full Bijuu transformation supposedly lasts for 8 minutes (not the case anymore as this was extended throughout the war)

Shadow Clone Technique: Naruto creates tangible “shadow clones” that can fight and use his techniques, but disappear after one definite hit. Can create hundreds and possibly over 1000 at once.

Summoning Technique: The Summoning Technique is a space-time ninjutsu that allows the summoner to summon animals or people across long distances instantly. Naruto uses this to call frogs, such as Gamabunta, and can also summon shadow clones from a different location.

Wind Release: One of the five basic elemental nature transformations. It is performed by making chakra as sharp and thin as possible. Wind Release is mainly short to mid-ranged offensive techniques that combine brute force and keen precision to deal with cutting and slashing damage. Wind techniques are usually performed by generating air circulation and can be enhanced through this method as well. Wind-natured chakra can also be channeled into blades to increase their cutting power and overall range. 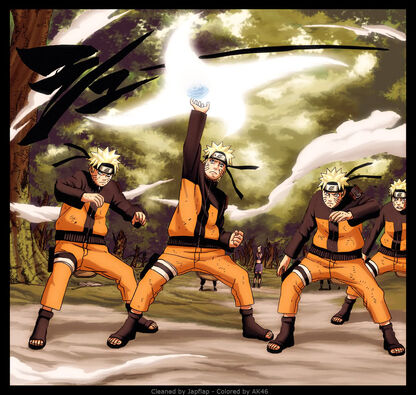 Sage Mode: The result of using natural energy along with a ninja’s normal chakra in perfect balance to drastically empower their abilities.

-Jinchūriki Forms & Abilities: Naruto is the third jinchūriki of Kurama — the Nine-Tails. He is gifted with its enormous supply of chakra. It also gives Naruto accelerated healing (recovering from minor injuries within a few seconds to significant injuries within a day) and depending on the amount of Kurama’s chakra he’s using, Naruto is also given an increase in strength, speed, along with an increase in his healing factor to such levels that he recovered from a Chidori strike through his chest in mere seconds.

-Sage Transformation: A form that Naruto was given after his meeting with the Sage of Six Paths/Hagoromo when Hagoromo told Naruto he was a reincarnation of his son Asura he gave Naruto a piece of his power for him to defeat Madara. 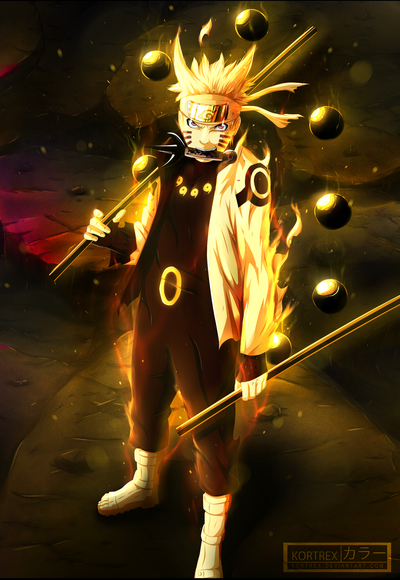 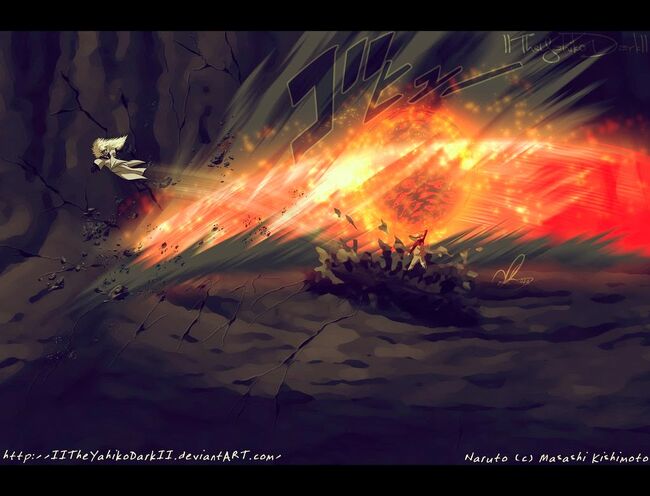 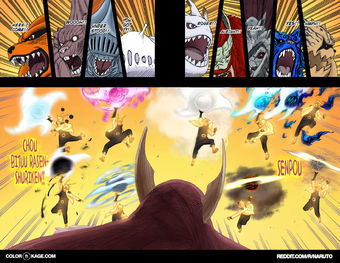