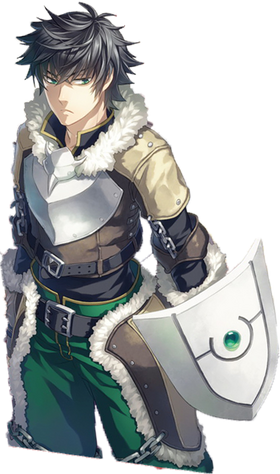 Naofumi Iwatani is the primary protagonist of "The Rising of the Shield Hero". Originally being a university student, he is summoned to another world as the hero of the shield in order to fight waves of monsters, threatening to destroy the world. However, different from the other 3 heroes, he experiences discrimination and false accusations as the shield hero, due to the religious beliefs of the populace and the false rape accusations of Malty Melromarc, a princess of the country he was summoned into.

Attack Potency: Below Average Human (Has an attack stat of 0 and would be incapable of harming even an infant[1]), Universe level+, possibly Low Multiverse level with attack reflection and possibly shield skills (Killed Medea by reflecting her Infinity Destroyer back at her with a positive feedback.[2] Has unlocked all shield skills and can raise them to the level of working against gods[3])

Speed: At least Supersonic, likely far higher (equal to Medea), likely Immeasurable reactions and attack speed (Was able to see, defend against and activate skills in reaction to attacks of Medea[4]; was able to tell the actions Raphtalia took in battle[5])

Lifting Strength: At least Class 25 (could throw the giant bird Houou through the air)

Striking Strength: Below Average Class (Couldn't even hurt an infant)

Stamina: Varies (Doesn't need to sleep or rest. How exhausted he gets depends on how much energy he gets from the universe)

He is able to choose from the following shields:

Intelligence: Above average (Is an expert about medicine, magic and trade. He is an expert in using his shield, being able to block and deflect opponents blows the optimal way, aiming to break the opponents weapons in the process. Additionally he is an expert at interfering with the opponents attacks so that they are unable to bring out their full power)

Weaknesses: Enjoys the suffering of his enemies, which leads to him to stretch fights in which he has the superior position just to make them suffer. Any shield skill the allows to deal damage to the opponent without him attacking first either causes strong backlash or has a long cooldown.

Toffee (Star vs. the Forces of Evil) Toffee's Profile (All were Low 2-C, and speed was equalized)

S-Sha (Hyperdimension Neptunia) S-Sha's Profile (Naofumi had access to defensive skills but was only Low 2-C and S-Sha started out in base but could go into her gold form with average Faith. Speed was equalized)

Dante (Devil May Cry) Dante's profile (Speed is Equal, Low 2-C for both)