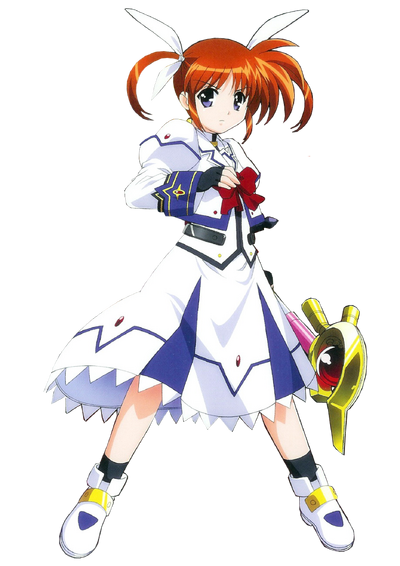 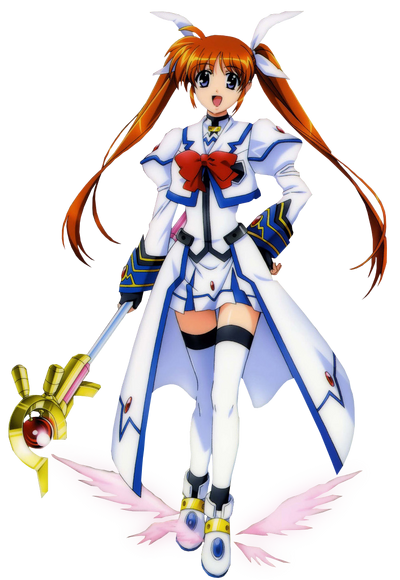 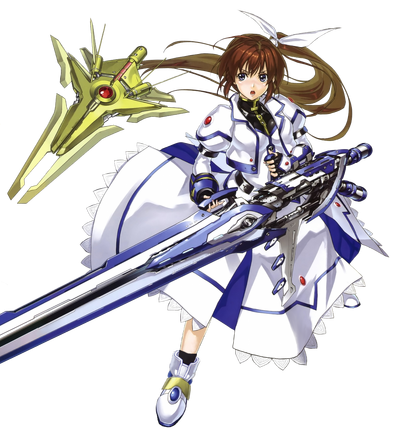 Nanoha Takamachi, the protagonist of the series, is introduced as a sweet little Ordinary Elementary School Student with a normal life. However, this changes when she answers a psychic call for help. Finding an injured ferret, Nanoha responsibly takes it to a nearby vet. Later that night, however, she hears another call and arrives in time to see the ferret under attack from a monster. The now-talking ferret explains that he's a mage, and gives her an Intelligent Device, Raising Heart, to fend off the attacking monster. With Raising Heart's help, Nanoha quickly learns the basics of magic, defeats the monster, and agrees to help Yuuno find and seal the remaining twenty Jewel Seeds before any more harm is done. Things proceed smoothly until another girl, Fate, appears and attacks Nanoha with a scythe-like Device. Even while she's defending herself, Nanoha realizes that Fate looks... sad. Nanoha is no stranger to sadness, having spent most of her childhood in an empty house. She resolves to do everything she can to learn about the mysterious girl and her reasons for fighting, and if possible, to become a friend she can count on. Nanoha temporarily joins the Time-Space Administration Bureau, which had been monitoring unusual activity, but takes matters into her own hands when they decide to let Fate exhaust herself to more easily capture her, a method she deems far too cruel. The two finally decide to stake everything on a final match, which Nanoha wins. Fate is taken into custody by the TSAB, but before Nanoha has a chance to speak with her, Precia interrupts, and Nanoha watches as Fate's world crumbles around her. Angry at Precia's cruel treatment of Fate, she joins the TSAB Enforcer Chrono and Fate's own familiar Arf in an attack on Precia and Fate's home: the Garden of Time. The three are outmatched until Fate returns to settle matters with Precia. Nanoha once again encourages Fate, and the two stop Precia from her mad plan to break reality. Precia dies in the collapse, but Nanoha manages to save Fate, and the two have a chance to talk several days later. Nanoha and Fate make official their friendship, and exchange hair ribbons as parting gifts.

Nanoha was later attacked by unknown forces, the Wolkenritter, and beaten to near-unconsciousness without warning or explanation. Despite her exhaustion and wounds, Nanoha fights alongside her new friends to drive off the enemies. As she recovers, Raising Heart is upgraded with a magic cartridge system. Nanoha puts her strict training to use fighting the Book of Darkness and its four knights, ultimately saving both them and Hayate Yagami, who was at the center of the incident.

She subsequently joins the TSAB, and moves to Mid-Childa where she serves as a Combat Instructor for the Air Force, becoming known as 'The Ace of the Sky'. Joining an elite task force, Riot Force 6, under the command of her friend Hayate, Nanoha spends her time training four promising young recruits, the Forwards. Hoping to save them from making the same mistakes that almost cost her her life, Nanoha stresses safety over risk, although she doesn't always practice what she preaches. With two of the Forwards, Subaru Nakajima and Teana Lanster, as her subordinates as well as Vita her sub-commander, Nanoha leads the StarS unit of Riot Force 6. She inadvertently becomes attached to a young girl named Vivio, a mysterious girl her squad rescued while on a mission. Vivio, however, is captured once again, and forced to power a nigh-indestructible warship. Faced with a situation, not unlike Fate's, Vivio is left questioning her creation. As she and Nanoha are forced into combat, Nanoha goes to incredible lengths to save Vivio and decides to officially adopt her.

Now, Nanoha's life as a mother as depicted in Magical Girl Lyrical Nanoha ViVid are interrupted by the rise of the Eclipse Virus. She joins Hayate's new task force, Special Duty Section 6, dons a new weapon called the Fortress to combat the Anti-Magic threat, and ends up saving Thoma from his power and subsequently becoming his group's trainer.

Tier: High 7-A, higher with Starlight Breaker | 6-B | 6-B, higher via combination attacks and Blaster System

Age: 9 at the start of the series, currently 25

Attack Potency: Large Mountain level (created an explosion that covered an area of 64 km in diameter and helped shoot through the Garden of Time with Divine Buster), higher with Starlight Breaker | Country level (contributed in creating a country sized explosion and destroying Chrono's Eternal Coffin) | Country level (can match S+ Rank attacks in an Anti Magilink Field), higher via combination attacks and Blaster System (lost 8% of her power after StrikerS)

Striking Strength: Unknown (compressed-mana strike can cause a kilometers wide explosion) | Unknown (can clash with Vita and Reinforce) | Country Class (can fight with Signum in close combat, could block punches from Sankt Kaiser Vivio that were capable of breaking her barriers)

Stamina: Superhuman, was capable of extensive use of the blaster system which caused physical damage when first used

Intelligence: Capable of learning magic at a remarkable rate despite requiring complex mathematical calculations while nine years old. Highly adept at battle tactics, being a tactics combat instructor, with many years of combat experience and fighting against diverse foes.

Weaknesses: She loses her durability without her barrier jacket.