VS Battles Wiki
Register
Don't have an account?
Sign In
Advertisement
in: Tier 6, Tier High 6-A, Tier 1,
and 72 more 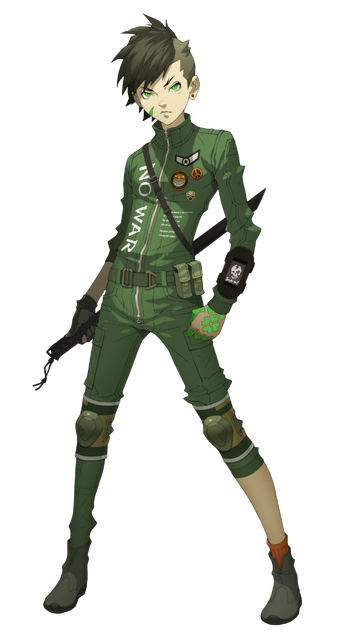 Nanashi (lit. "Nameless") is the protagonist of Shin Megami Tensei IV Final. A member of the Hunter Association, he is killed during a mission, only to be resurrected by the mysterious demon Dagda. Due to circumstances seemingly unexplained, Nanashi is revived not as a human, but as something else: A Godslayer. Now, he walks a violent path, either with the goal of saving humanity from the Creator's tyranny, slaying him and bringing true freedom in the process, or to usurp the Creator's throne and rule in his place.

Superhuman Physical Characteristics, Accelerated Development and Reactive Evolution (Being both a human and a Messiah of The Great Reason, Nanashi has extraordinary inner power that can be drawn out in large amounts and over shorts period of time, allowing him to maintain his pace against much stronger foes and continuously grow more powerful with each victory, evolving quickly enough to match and surpass the likes of Lucifer and Merkabah a mere day after being overpowered by a horde of far, far less powerful angels), Immortality (Types 4, 7 and 8. Became an undead being, having a dangerously low body temperature and blood pressure, and his soul itself is under the dominion of Dagda, who will always resurrect Nanashi and send him to the point immediately before his death until his purpose is fulfilled), Observation (Type 2. As a direct emissary of The Great Reason, Nanashi's powers of Observation are extraordinary, being the product of The Axiom itself shaping the world through his eyes and allowing him to debase and permanently kill even Gods as major as YHVH all by himself), Supernatural Willpower, Magic, Non-Physical Interaction (Can damage and interact with spirits and ghosts, as well as strike down the informational forms of Demons and entities devoid of time and space, as well as formless, nonexistent entities such as The White), as well as Healing, Regeneration (High-Mid), Invulnerability and Durability Negation (As a Messiah and a magic user, Nanashi's attacks likely function on both the physical and spiritual/mental/conceptual/informational levels, with wounds he inflicts being unable to be healed without spiritual power and capable of harming physically invulnerable foes, as well as killing regenerative entities, such as Nagas and Blobs)

Enhanced Attack Reflection (Can erect shields that block out all physical and magical attacks with Tetrakarn and Makarakarn respectively), Existence Erasure (Can use the "Megido-" skill line, which is said to exert control over the light of destruction that engulfs all in its range into the "annihilation beyond death," leaving no trace of the opponent behind)

Enhanced Resistance Negation (After defeating either Dagda or his friends, Nanashi unlocks his Awakened Skill, which imbues all of his attacks with the Pierce effect, allowing them to naturally bypass all resistances, be them drain, repel or null-based), Sealing (Sealed Krishna with Masakado)

All previous abilities to immensely greater degrees, as well as Cognitive Physiology (Archetype) and all of YHVH's powers

Fusionism, Possession and Existence Erasure (Maintained his own existence within the Diamond Realm, which is a another form of Atziluth and the realm in which the Buddhas reside, being thus a world of pure nothingness where the concept of the ego does not exist and all individuality dissolves into oneness, with ordinary people being immediately overwhelmed and scattered throughout all possible worlds by stepping into it. Should have a similar will to Flynn), Conceptual Manipulation / Information Manipulation / Mind Manipulation / Soul Manipulation (Frequently does battle against Demons, who affect their targets on all of the above levels with every attack, often withstanding numerous strikes from them and emerging victorious through brute force alone. Additionally, his soul is under the control of Dagda, who can override interference from other beings, such as with Mephisto), Fate Manipulation and Curse Manipulation (Able to fight and defeat White Rider, the abstract embodiment of victory and conquest whose crown assures his success in all battles and wars. Unbothered by interactions with Pisacas, which fate humans to die in the span of nine months), Disease Manipulation, Probability Manipulation, Madness Manipulation and Chaos Manipulation (Unaffected by the act of looking into Girimehkala's eye, which inflicts incurable sickness and misfortune into individuals, and by the gaze of Yakkha, which is said to inflict disease and madness), Petrification and Poison Manipulation (Can easily do battle against Basilisk and Cockatrice, both of whom turn normal people into stone simply by being touched or looked at, and have a gaze and breath so poisonous that any mortal being near them instantly dies, turning their surroundings into a desert), Life and Death Manipulation (Can fight Liches, whose presence drains the life of those who see them, and is not affected by Balor's gaze, which instantly kills enemies, and Chatterskull's laughter, which dooms whoever hears it to death, immediately stopping their heart. Prevailed over Azrael, who remarked that Nanashi and his party overcoming his dominion over death was an impossible event)

Attack Potency: Multi-Continent level (Defeated King Frost, who can freeze the whole world with his power) | Low Complex Multiverse level (Defeated and killed Shesha's first and second forms, becoming strong enough that the Ame-no-Habikiri sword was no longer necessary to beat him by their third encounter. Can kill Loki, and defeated the Four Heavenly Kings, followed by Maitreya) | Outerverse level (Defeated both Lucifer and Merkabah in quick succession, and is superior to Shesha's third form, who will promptly flee from the scene should Nanashi choose to ally himself to either of the former two. Defeated Inanna and Mitra-Buddha, and easily killed his friends during the Anarchy Route, all of whom assisted him in the previous battles, before doing battle with Vishnu-Flynn and damaging him so severely that one of his components died mid-fusion. Did battle against YHVH, and can manually defeat His infinite heads in the Anarchy Route should he fail to dethrone Him, forcibly pushing Him into a demonized state) | Outerverse level (Fought against an unrestrained Stephen, and managed to defeat him alongside the other Messiahs after a long battle, although the former was more amused and satisfied by their performance than actually threatened in the afternath of the fight) | Outerverse level (Took over YHVH's throne and usurped His place as the Will of the Universe, becoming the ruler and Creator God of a new world in which existence has reverted back to its primordial state, with humans existing as incorporeal entities unbound by words or language, who exist in tune with The Great Reason)

Stamina: Superhuman. Frequently does battle against hordes of powerful demons while constantly making use of abilities that drain both physical and mental stamina, hardly breaking a sweat over the course of the story. Could fight against Dagda and keep him occupied even while falling apart and on the verge of death due to the former's power no longer sustaining him | Infinite as the Will of the Universe

Intelligence: Considered a prodigy demon hunter, and in spite of his young age is capable of masterfully wielding a large assortment of different weapons, ranging from swords to firearms, and using them to fight against various Gods and Demons of old, even ones whose existence is intimately related to the concepts of combat and warfare, as well as high-ranking generals of the armies of both Heaven and Hell, such as Beelzebub, Belial and Metatron | Nigh-Omniscience as the Will of the Universe

Weaknesses: His life is sustained by Dagda, and should their connection be severed, Nanashi will start slowly falling apart and eventually die. Observation is a phenomenon that happens entirely on the unconscious level and is intimately tied to Nanashi's own beliefs, thoughts and subjective experiences, and thus its applications, although vast, are not something that are able to be freely utilized in battle. | None Notable as the Will of the Universe

Demon Whisper: Unlike most of the series' human protagonists, Nanashi has the inherent ability to wield magic, converting his own life-force into raw power in order to impose a series of effects upon the physical plane. Not only that, but he is also able to communicate with his Demons in order to receive skills and abilities from them in a process known as a Whisper Event, being able to potentially learn any skill in the game, save for a select few, through this method, and following this, any further Whisper Events will serve to strengthen the abilities received in various ways. For a list of all possible skills Nanashi can inherit, see here.

Almighty Attacks: The highest class of spells in the Megami Tensei franchise, consisting largely of powerful non-elemental attacks that have the special property of completely bypassing any resistances or immunities that a target may possess, be them innate or magically enforced, with the latter of which including anything from reflective barriers to items that distort the very laws of the universe in order to protect the user from all forms of damage, and they are likewise unable to blocked, drained or generally defended against.