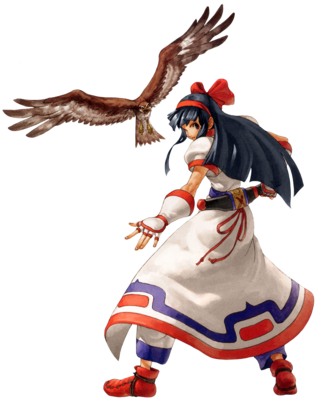 Nakoruru is the main female lead character from the Samurai Shodown series and one of the mascots of SNK games along with Terry Bogard. She is a shy, polite, calm, and kind girl who loves nature and opposes against all evil forces. Upon her father's death, she became his successor as the Kamui Warrior when the priestess, Kamui, requested her to do so. After defeating Mizuki, she sacrificed her life to restore the balance of the world's nature and became a spirit of nature. She eventually becomes human again when evil arises once more and travels across space and time to halt world disasters. She traveled into the King of Fighter's universe after sensing a disturbance of time and space.

Age: 15 in debut, over thousands of years in King of Fighters (Stopped aging after becoming the spirit of nature)

Powers and Abilities: Superhuman Physical Characteristics, Expert Swordmanship, Energy Manipulation, Can reflect projectiles with her cloak, Immortality (Types 1 and 7), Can communicate with spirits, Can travel across time and space, Healing, etc.

Attack Potency: City level (Along with Haohmaru, fought and defeated Mizuki and Amakusa, the latter being able to destroy Nagasaki during battle)

Intelligence: Being a priestess, she has a vast amount of knowledge of nature and make careful decisions in her action.