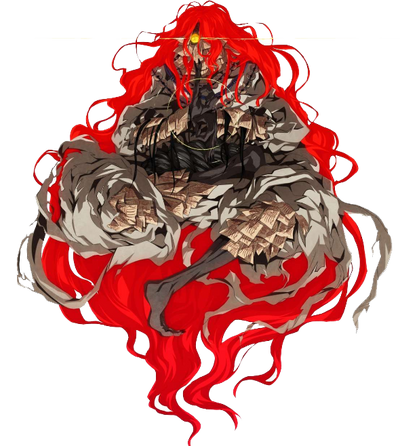 Nakiri Kuubou is the leader of one of the Six Forces in the Dream World, Hazor. Nakiri is a corrupted god summoned by Amakasu Masahiko as "one of his trials" against humanity. Generally occupying the Seventh layer of the Kantan Dream, he serves as a wall that hinders the other forces from reaching Alaya who resides in the final layer, the eighth one.

Tier: 5-B as Foreshock. 3-A as Mainshock, higher over time

Classification: Tatari (Waste God), Incarnation of the Earth, Guardian of the Imperial City (as Huanglong), Summon of Amakasu, one of the Six Great Forces

Powers and Abilities: Superhuman Physical Characteristics, Immortality (Types 1, 3, and 8; will always come back so long as Alaya, the source of all existence across humanity and parallel universes as well as that of the past, present, and future of it, still exists), Dream Manipulation, Reality Warping, Statistics Amplification in Mainshock (Summons Nine Dragon heads which causes his power to increase a trillionfold and more over time), Flight/Levitation, Regeneration (Mid-Godly. Was able to come back after being erased from existence by Harumitsu in a minute), Vibration Manipulation (Can release quakes capable of atomizing and destroying space itself), Can manipulate causality to make his attacks never miss, Barrier Creation, Abstract Existence (Type 1: The Kantan are stated to be nothing more than a dream, a fictional and metaphysical existence that reality cannot affect), Energy Manipulation, Deconstruction (His quakes can destroy anyone it touches on an atomic level), Summoning (Able to summon an endless number of demons to fight for him), Mind Manipulation (Can cause the target's mind to go into a state of horror and shock just by looking at them once), Soul Manipulation (His attacks can affect the soul itself. His spiritual density can even kill those who can't withstand its intensity), Light Manipulation, Animated Shadow, Duplication (Can create shadows of himself that hold a small fraction of his power. Each shadow possess power that dwarfs that of the other Six Forces), Possesses a deadly miasma that rots anything that comes in contact with it along with being able to destroy the mind and soul, Attack Reflection (After receiving an attack, he can send it back towards the target at several times the original force), Void Manipulation (Can bring anything he destroys to nothingness), Can deal mental, spiritual, and conceptual damage, Durability Negation, Aura (Fear, can paralyze others with his presence including those like Harumitsu who have fought many battles with him. His aura can also manifest as waves of vibrations akin to earthquakes that destroys everyone and everything on an atomic level), Non-Physical Interaction (can destroy physical and even metaphysical aspects like space-time, dreams, ley-lines, souls, etc. via Dragon's Roar), Resistance to Spiritual, Mental, Material, Spatial, Temporal, and Conceptual attacks

Attack Potency: Planet level as Foreshock (Can generate a tremor that both atomizes and spatially destroys what it affect, With the scale of said tremor being capable of casually affecting the entire planet). Universe level as Mainshock (Is vastly stronger than his foreshock state. His tremor is now universal in scale, and it can reach to the other side of the universe and even shake it just from the initial activation of this phase), higher with time (His tremors increase in strength and range with each second and start to spread over all of creation)

Speed: Supersonic+ via powerscaling (From Seijuurou, though he normally doesn't move when fighting). His vibration waves speed can reach higher levels (Able to cover hundreds of kilometers in an instant or spreading through the entire universe and all of creation in a matter of seconds)

Striking Strength: Continent Class as Foreshock (Hits with the force of a moving continent). Higher as Mainshock and with time progression

Durability: Multi-Continent level as Foreshock (A weapon capable of burning the entire earth won't even scratch him). Universe level as Mainshock (Stronger and more durable than before in this state). In addition, his aura is able to atomize those that get near him due to being a living earthquake, making him even more difficult to approach and defeat. Regeneration and nature of existence also makes him hard to kill

Intelligence: Mindless. Thinks of nothing but destruction to everyone and everything in existence.

Weaknesses: Can be purified back to his original self (though this is hard to achieve due to various specifications in doing so such as making a sacrifice to the dragon). 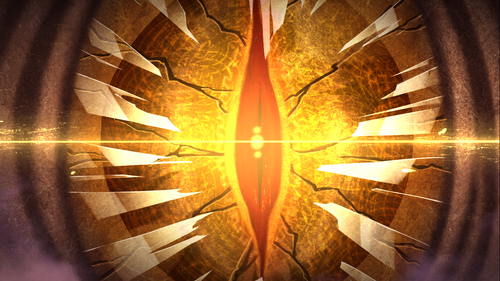 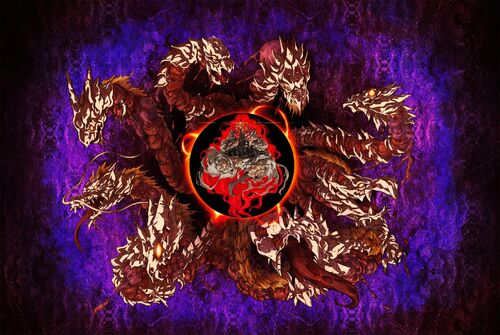