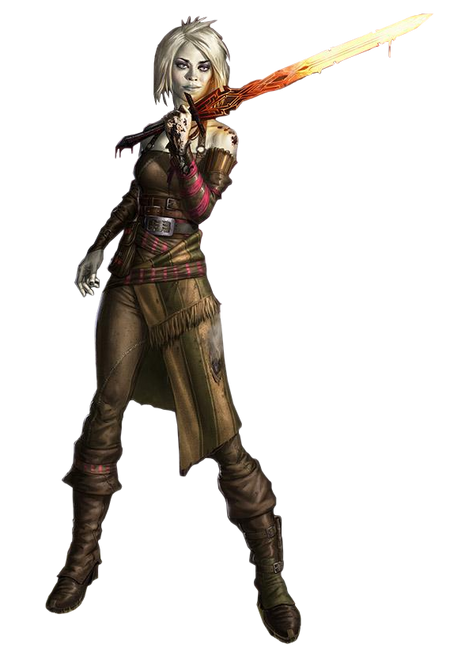 Nahari is a primarily white-aligned Planeswalker that has been gifted her signature ability to manipulate stone and the land around her. After first discovering her planeswalker spark, she found and grew an almost father-daughter bond with Sorin Markov as they ventured across the multiverse honing their skills. After they discovered the Eldrazi tearing away planes, they found a Spirit Dragon Planeswalker named Ugin and the 3 began to construct a plan to defeat the Eldrazi. They then put the plan into action with Sorin distracting the eldrazi to Zendikar, a lush and mana full plane, Ugin combatting them with his breath attack, and Nahirir constructing monuments called Hedrons which then sealed the Eldrazi onto Zendikar binding them there for hopefully eternity.

Nahiri guarded the hedrons while the others left and intended to for eternity, stopping those who would use the hedrons for energy. Millennia later, a clan of vampires tried to create a energetic monument near the hedrons which then disrupted it leaving some of the Eldrazi free. Nahiri called for help, but ended up not needing it. She still looked for Sorin after she dealt with and fixed the problem. She then found Sorin on his home plane Innistrad where after a misunderstanding and a fight against Avacyn, Sorin's creation, Sorin threw her into a prison called the Helvault where she remained trapped for a long time.

Eventually, she became free of the Helvault and returned to Zendikar where she saw it laid to waste by the Eldrazi. Enraged and Heartbroken, she swore vengeance on Sorin and went back to Innistrad to start constructing monuments on Innistrad which would then concentrate enough energy to summon Emrakul to Innistrad. She then went to comfort Sorin, who had gathered a Vampire Army which proved to be useless against her. They then fought against each other in a close battle until Nahiri sealed him in stone and then planeswalked away in triumph.

Powers and Abilities:  Superhuman Physical Characteristics, Mastery over White and Red Mana, Lithomancy, Forges and uses Stone or Normal Blades, Summoning (A general skill of planeswalkers, however Nahiri can even summon the likes of Emrakul with preparations), Possibly Gravity Manipulation (Caused large portions of Markov Manor float in the air regardless of her presense), Enhanced Senses (Can sense anyone walking on stone or the ground hundreds of miles away from her), Can planeswalk to other planes/universes within the MTG multiverse, Immortality (Type 1), Can Seal Others in Stone, Can Concentrate and Use Energy across a Plane via Constructs she creates, which can give her Attack Reflection (By controlling leylines in stone, she can effectively redirect spells cast at her towards her opponent. This included Death spells used by Sorin) and Magic Nullification (Able to manipulate the mana leylines on a plane in a way that will negate her opponents spells), Resistance to Mind Manipulation (Wasn't affected by Emrakul's passive Mind Attacks) and Existence Erasure (Like all Planeswalkers, she can survive brief exposure to the Blind Eternities, the merest touch of which can annihilate other living beings. Fought with the Eldrazi, which passively erase the existence of things around them) | All of the above as well as Reality Warping, Shapeshifting, and Healing. All Oldwalkers have Immortality (Types 1,3,7,8 and 9) based on their Planeswalker Spark and are Non-Corporeal.

Stamina: Very High. She has stalemated and won battles against Avacyn and Sorin on separate occasions | Likely limitless

Range: At least Extended Melee Range, likely Hundreds of Kilometers via being able sense anyone from hundreds of miles.

Intelligence: Nahiri is a very Intelligent and Gifted Planeswalker having mastered her ability of Lithomancy and using the environment to her advantage. She also has tons of experience throughout the thousands of years of her lifetime and has constructed several monuments including the Hedrons which would then trap the Eldrazi.

Weaknesses: Will struggle if her Mana is blocked.

Nahiri, Storm of Stone (Alternative Art)
Add a photo to this gallery