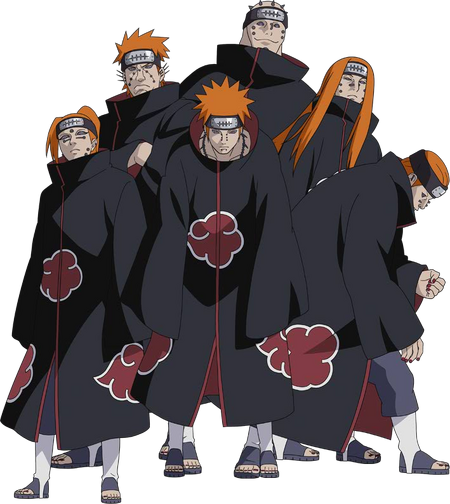 Nagato (長門, Nagato) is a member of Akatsuki from Amegakure. After being orphaned by war, Nagato helped form the Akatsuki to promote an end to warfare. After his friend and leader, Yahiko was killed for preaching peace, Nagato lost hope in this approach. He adopted the alias of Pain (ペイン, Pein) and partnered with Konan, began leading a new Akatsuki, one that would sow despair to force the world to change its violent ways.

Superhuman Physical Characteristics, Acrobatics, Surface Scaling, Chakra Manipulation and Control, Longevity, Air Manipulation, Fire Manipulation, Earth Manipulation, Water Manipulation, Electricity Manipulation, Yang Manipulation, Energy Absorption, Extrasensory Perception with the Rinnegan (He was able to see Jiraiya's invisible barrier), Clairvoyance (Visual Linking and Enhanced Sight with the Rinnegan), Invisibility by hiding inside his summoned Chameleon, Sealing, Statistics Amplification (Can enhance his physical capabilities with chakra), Healing with the Preta Path and Naraka Path, Paralysis with the Black Receivers (Can paralyse and hinder the movements of targets, and also control them), Limited Levitation, Telekinesis and Gravity Manipulation (Can control attractive and repulsive forces with the Deva Path), Body Control, Energy Projection, Cyborgization, and Technology Manipulation (Can generate additional mechanical arms and weaponry such as blades, drills, missiles and cannons with the Asura Path), Resurrection (Can revive the dead with the Outer Path), Mind Reading and Soul Manipulation (Can read the minds of his targets and extract their souls by making contact with them with the Human Path), Summoning (Can summon various animals, some of which can fly and bombard targets from above, manipulate water, continuously split into separate entities when attacked, and a demon that instantly kills the victims who lie, and can keep and transfer souls with the Animal Path), Possession (Can split his consciousness and powers into corpses. Each body sees what the rest of the bodies see), Non-Physical Interaction (Able to touch Shizunes soul as he pulled it out), Astral Projection (can make himself an astral projection and link up with other Akatsuki members using it), Non-combat applicable and preparation based Pocket Reality Manipulation/Spatial Manipulation (Can create a sealed dimension with tags put in specific areas), Limited Death Manipulation with Preparation (He can put his or another persons chakra into a target and control them as his own body albeit weaker, once the chakra runs out the target dies he also gains Weapon Creation and Power Mimicry from using this jutsu as it recreates their weapons and the abilities the weapons have he also gets these from people removing tags in set places that makes a copy of the person with the same abilities), Weather Manipulation and Extrasensory Perception with Rain Tiger at Will Technique (Allows him to create rain clouds that cause rain to fall in a large area, anyone that steps in the rain is sensed by him and he can sense their strength from it as well)

Speed: Hypersonic+ (Can keep up with Jiraiya's clone) | At least Massively Hypersonic+ (Can keep up with and overwhelm Sage Mode Naruto, was also able to defeat Kakashi, Choza and Choji at the same time) | At least Massively Hypersonic+ combat speed (Able to react to and capture base Killer B, but the loss of his legs make him mostly immobile) with Sub-Relativistic reactions (Able to absorb KCM Naruto's Rasengan)

Stamina: Very high, and virtually unlimited under the effects of Edo Tensei.

Standard Equipment: Can create and manipulate black chakra receivers via the Outer path, and weapons and projectiles with the Asura path.

Intelligence: Gifted (Was the original leader of Akatsuki (but was manipulated by Tobi for a good portion of that time) and is an able tactician, able to control all Six Paths with such skill that he single-handedly demolished the entire Leaf Village with little resistance, killing famed shinobi such as Kakashi in the process)

Weaknesses: None Notable. | Each body only has a handful of abilities- they're weaker if they're isolated from the others. Deva Realm has a 5-second window between repels. Shinra Tensei drains Deva Realm, and Chou Shinra Tensei temporarily disables all of his bodies. Chibaku Tensei uses up a lot of chakras. | None Notable.

Rinnegan (Saṃsāra Eye): Said to be the most powerful of the Three Great Dōjutsu, the Rinnegan is admired as being able to bring forth all ninjutsu. The holder of these eyes can completely master all five fundamental nature transformations that form the basis of ninjutsu. It also allows the user to use all of the six paths techniques, as well as the seventh path - that is "beyond life and death."

Kid Nagato.
Add a photo to this gallery