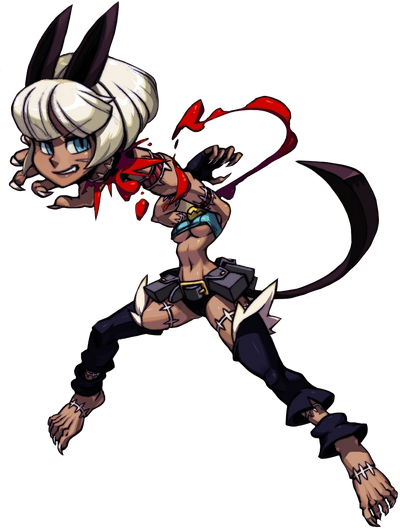 A feline feral, Nadia Fortune is the last surviving member of the Fishbone Gang, a notorious band of otherwise Dagonian thieves. Their last mission ended in tragedy: a failed attempt to steal the mysterious Life Gem from Lorenzo Medici resulted in their grisly deaths. Before meeting her own doom, Ms. Fortune swallowed the Life Gem and managed to digest it. The Gem’s power permeated her entire body, making it truly undying… even after being cut into several pieces. Now hiding in the shadows of Little Innsmouth, Ms. Fortune plots to avenge her fallen comrades.

Powers and Abilities: Superhuman Physical Characteristics, Immortality (Types 2 and 3), Regeneration (High-Mid), Can stretch her limbs, Can split her body into several pieces and control them, Can harden her ears and tail for use as weapons, such as turning her tail into a katana, Blood Manipulation, Immune to cutting and stabbing attacks

Attack Potency: At least Multi-City Block level (Defeated Valentine twice, Double, and the Skullgirl and destroyed The Skull Heart in her storyline, Described as being as powerful as Beowulf)

Speed: Hypersonic (Was able to keep up with Peacock)

Stamina: Extremely High (Can survive without her head indefinitely)

Weaknesses: Can be killed by crushing her