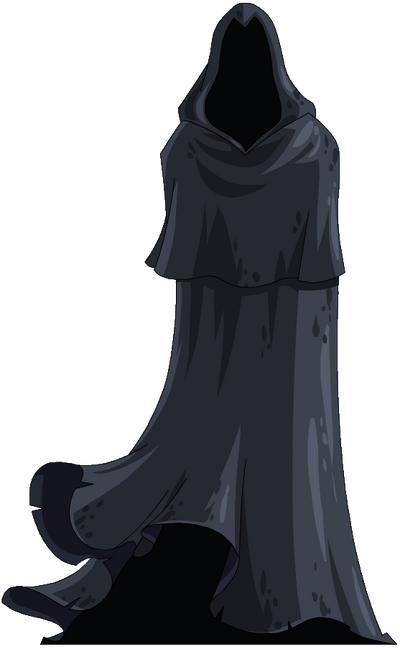 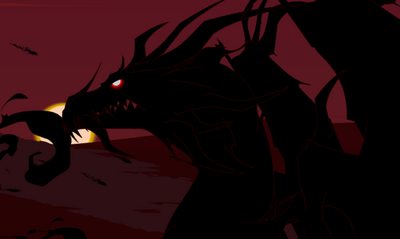 The Mysterious Stranger is a name given to the manifestations of a mysterious primordial being from the plane of darkness that existed before the universe. Its goal is to revert universes back into darkness and rid them from the "pollution" of light.

Powers and Abilities: Immortality (Types 1, 5, 6, 9, and possibly 4), Darkness Manipulation, Reality Warping, Shapeshifting, Magic, Non-Corporeal, Non-Physical Interaction, Abstract Existence (Described as neither a being nor entity, but instead a force of nature or echo of another primordial omniverse), Teleportation, Dimensional Travel, Self-Sustenance (Types 1, 2, and 3), Possession, Energy Absorption and Transmutation (Reduced the Necrotic Sword of Doom to energy and absorbed it), Power Absorption, Power Bestowal, possibly Elemental Intangibility and Inorganic Physiology due to being a "being of pure darkness", Acausality (Type 3; There are countless versions of Mysterious Stranger within the countless universes of the AE multiverse), Adaptation (Are constantly evolving and changing), Extrasensory Perception (Mentioned time and reality to be unfolding as one moment), Fire Manipulation and Perception Manipulation (Upon its arrival, the surroundings begin to appear dark red and gradually burst into black fames), Summoning (Can summon corrupted copies of individuals such as Sepulchure, Xan, Drakonnan, and Vordred), Corruption, Time Manipulation (Can kick time into its own desired flow). Resistance to Perception Manipulation (Sees time and reality to be unfolding as one moment) and Time Manipulation | All previous, Superhuman Physical Characteristics, Flight, Large Size (Type 6), Size Manipulation, Energy Manipulation, possibly Immortality (Types 3 and 7 via being a dracolich or essentially an undead dragon),Flight, Fire Manipulation, Aura, Intangibility (Immune to physical strikes), Energy Manipulation, Darkness Manipulation, Resistance to Magic and Elemental Manipulation | All previous, likely many more.

Attack Potency: Likely Below Average level physically (Incapable of affecting anything that is present within the slightest bit of light. Takes on a spiritual form lesser than the meanest of ghosts), higher with magic | At least Star level (Grew bigger than the sun and ate it), potentially Universe level (If DreadDragon Drakath's body hadn't been destroyed it would have continued to grow strong enough to destroy all light in the universe and revert everything back into darkness. Claimed to have surpassed that of Voidstar the Darkness Avatar) | Unknown. (Represents the collective consciousness of all Mysterious Strangers, has said to exist outside of linear time).

Speed: Unknown | FTL+ (Flew from the planet of Lore to the Sun within seconds) | Unknown, likely Omnipresent (Said to be within and without all worlds including Lore).

Durability: Likely Below Average level (Even candle light can expel it from the mortal world), higher with magic | Star level | Unknown

Stamina: Possibly limitless due to being the manifestation of primordial darkness

Standard Equipment: An orb used for communication between realms | The Ultimate Orb

Intelligence: High (Exploited Sepulchure to do its plan and took advantage of Drakath's betrayal).

Weaknesses: Light. Must be bound to an object to be able to survive in mortal world | None notable | Unknown