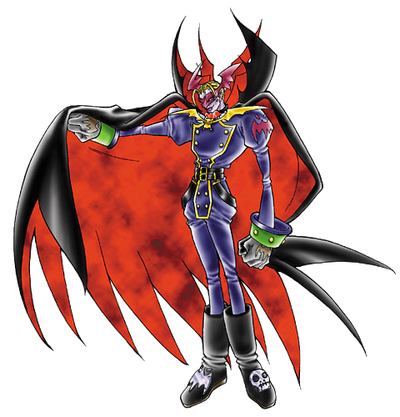 Myotismon was Resurrected through the dark arts, it is the king of Undead Digimon which has obtained mighty powers. Originally a fiendish computer virus that destroyed the computer data it absorbed, it possessed the ability to revive the destroyed data as malignant computer viruses. As it possesses an extremely cruel and cunning personality, it is exceedingly difficult to destroy this Digimon. However, it cannot demonstrate its powers outside of the night, and its power is cut in half during the daytime. He serves as a major antagonist in Digimon Adventure and the main antagonist is Digimon Adventure 02. 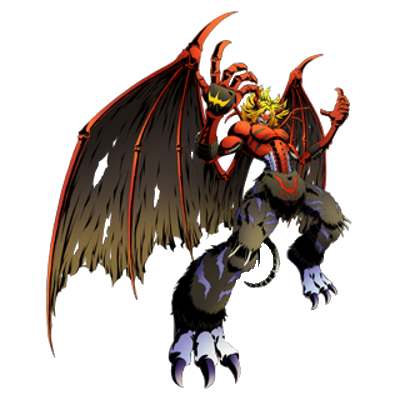 It is a demon beast that has the lower half of a beast and an upper half with a beetle-like shell and is the true, evolved form of the king of darkness, Vamdemon. As Venom Vamdemon, who has unleashed its hidden power, it has nothing but omnicidal and destructive impulses, and Vamdemon, who originally maintained its gentlemanly conduct, reason, and intelligence, hates exposing its true, ugly form. 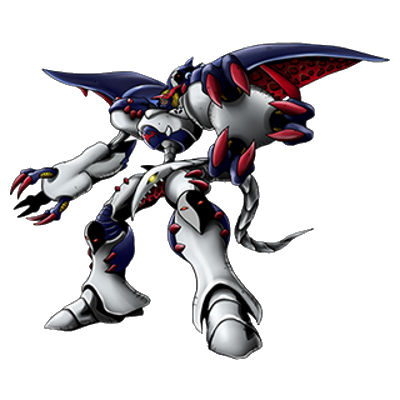 Said to be Vamdemon's final form, it is a Demon Lord Digimon. Unlike Venom Vamdemon, which lost its intelligence by seeking too much power and was like a beast, it succeeded in surpassing Venom Vamdemon by harmonizing its intelligence alongside all of its other aspects. It possesses an inhumanly cruel personality and is willing to do anything to achieve its own desires. The living artillery on both its left and right shoulders, "Sodom" and "Gomorrah" respectively, leech off of it.

Superhuman Physical Characteristics, Digimon Physiology, Nonexistent Physiology (Physical. Myotismon is a nonexistent being as a natural inhabitant of the Dark Area), Flight, Immortality (Types 1 and 7), Offensive Information Manipulation and Durability Negation via Night Raid (The bats disappear into the opponent's bodies and destroys the foe's data from the inside out by deleting their data along with the victim's), Pit Crusher and Blood Sucking (Bloodsucking in Digimon revolves around having one's information drawn out, their vital functions ceasing and them dying), Soul Manipulation, Telekinesis and Telepathy, Electricity Manipulation, Darkness Manipulation, Animal Manipulation (Can create and control bats), Fire Manipulation, Dimensional BFR via Hell's Hand (Can drag others to the Dark Area where they are erased into nothingness and absorbed by Lucemon), Status Effect Inducement, Portal Creation (Can create portals out of bats), Petrification, Weather Manipulation, Madness Inducement (Can drive others to utter insanity), Resurrection (Has the ability to revive data), Hacking, Can drain people of all their blood, may have the ability to merge worlds (requires prep), Hellfire Manipulation and Conceptual Erasure with Dark Fire (The Flames of Hell/Dark Area aka El Evangelo are purifying flames that erase those who are burnt by them. This goes so far as to being able to erase even the Seven Great Demon Lords and erase one beyond death in which in Digimon death means nothingness. Whether the flames erase one beyond nothingness is dependent on whether they are evil or not. If evil, the one who is erased will be erased beyond nothingness), Life Manipulation (Can drain one's life force), Invisibility, Memory Manipulation, Information Manipulation via Magic, Duplication (Inherited from Kuramon. Can duplicate himself thousands of times in seconds), Death Manipulation via Death Charm, Holy Manipulation, Ice Manipulation, Life Draining, Fire Manipulation, Illusion Creation, Teleportation, Summoning, Shapeshifting, Mind Control, Transmutation, Phasing, Healing, Dream Manipulation, Limited Probability Manipulation via Destroyer, Fear Manipulation, Resistance to Death Manipulation, Time Manipulation and Existence Erasure.

Attack Potency: At least Large Star level, possibly Multi-Solar System level (Equal to if not superior to other Ultimate level Digimon such as Digitamamon) | Galaxy level (Overpowered MegaKabuterimon, Zudomon and Garudamon all at once with a mere hand gesture) | Galaxy level (Equal to other Mega level Digimon) | Galaxy level (Overwhelmed WarGreymon and MetalGarurumon, however did so before they encountered the Dark Masters) | At least Low Complex Multiverse level (Planned on unify both the Digital and Real Worlds creating a single World of Darkness), possibly Complex Multiverse level (It's considered a Demon Lord of the highest level to the point of being thought to be one of the Seven Great Demon Lords)

Speed: Relativistic with FTL combat speed (Should be at least comparable with other Ultimate-level Digimon) | Relativistic+ movement speed with FTL Combat and Reaction speed (via power-scaling to Mega Digimon) | Immeasurable (Should likely be comparable to SGDL and Royal Knights in speed)

Stamina: Extremely High; being in sunlight lowers it considerably

Intelligence: Myotismon is a dangerously capable strategist and combatant, preying on the DigiDestined insecurities and weaknesses to make them fight amongst themselves and taking them all on at once and winning until Gatomon Digivolved into Angewomon. | VenomMyotismon is not as intelligent as his previous form due to giving it up in exchange for power, but is still a competent enough combatant to take on both WarGreymon and MetalGarurumon at the same time | Unlike VenomMyotismon, MaloMyotismon retains his intelligence, allowing him to outsmart the DigiDestined, read their minds, and trap them in a world of their desires. He is crafty, devious, and hatched a plan spanning over five years to achieve physical form.

Weaknesses: Highly overconfident, weak to the power of light and holy powers, sunlighdeal of his intelligence upon taking this form | The power of light itself (meaning positive t weakens him | Light-based attacks are even more effective against him and he loses a great emotions and desires) can weaken him, relies on negative emotions and darkness to maintain his existence